On Christopher Marlowe’s “The Passionate Shepherd to His Love” 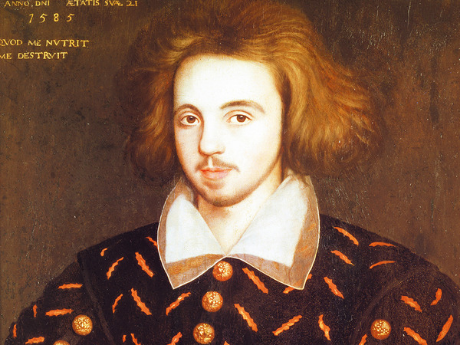 You love John Keats. I do too. He revolutionized the art, died young, left a lot of masterful poetry unwritten, was good-looking and tubercular: Keats!

But Christopher Marlowe left a lot of poetry unwritten too.

He didn't have the tuberculosis, but he died young, murdered at the age of 29.

And he also revolutionized his art, shocking the Elizabethan stage with the advantageous reach of blank verse and clearing the way for Shakespeare, the standalone speeches of Paradise Lost, and countless subsequent dramatic monologues, some of which you, yourself, might even have written.

But why don't you love Christopher Marlowe as much as you love John Keats?

John Keats was influenced by Shakespeare.

But Shakespeare was influenced by Marlowe.

No one influenced Marlowe, except for maybe Seneca.

Why don't you love Seneca?

And is it possible Marlowe wasn't good-looking enough?

I'm afraid you might have a point there. We like our young dead to be hot. Take a look at any portrait of Keats: the curly otherwordly, the burning cherub staring into space. In some depictions, Keats even seems to have the odd blond highlight. Now, view the Corpus Christi portrait of Marlowe: arms crossed in a way he seems to hope isn't diffident, the head too small for the body, the chin too small for the forehead, the mustache with its junior high coverage, and the hair-do seemingly lowered onto the scalp from a great height, as if by a construction crew.

Or is it that we've been made prejudiced against Marlowe by the negative response to his most famous poem, "The Passionate Shepherd to His Love?"

John Donne and Walter Raleigh, in famous talk-backs, mocked Marlowe's poem as simplistic carpe diem. Robert Herrick, who liked to make fun of what the older boys made fun of, followed Donne's suit. Swinburne called it "pure fancy." I'm not sure if Keats ever read it, but somewhat later the American William Carlos Williams attacked it with a poem entitled "Raleigh Was Right," siding with the company, and characterizing Marlowe's poem as delusive pastoral escapism, a slice Golden Age cheese-cake.

Or is it that we like Keats more because Keats knew he was going to die, that prescience, that fair-creature-of-an-hour thing that all his fans talk about, his living-dead hand?

But Marlowe knew he was doomed, too. Or, at least, he knew he was in terrible danger. A spy at 21, recruited out of Corpus Christi by the Walsingham syndicate—the same people who would turn on him later—Marlowe had a lot of enemies. Here is my summary of the known events: in 1593, a plague year, Marlowe's former room-mate, the playwright and torture victim Thomas Kyd, put Marlowe in the Elizabethan jack-pot as an Arianist heretic, naming names to the Privy Council. Around the same time, the professional informer, would-be poisoner, and con-man Richard Baines publicly denounced Marlowe, suggesting Marlowe to be an atheist, a pederast, and a lover of tobacco. On the 18th of May, the Privy Council issued a warrant for Marlowe's arrest. On the 30th, while out on bail, Marlowe was stabbed to death in Deptford, after a meal in a boarding house, through the eye, by his friend and fellow spy Ingram Frizer, the same man who'd invited him to Deptford for dinner.

And in this rough context, and pausing to gaze now and then at the Corpus Christi portrait of Christopher Marlowe (the right eye is the one Frizer stabbed him in, by the way), let's revisit the poem "The Passionate Shepherd to His Love." While reading, please keep in mind that William Carlos Williams thought it escapist. And also remember that William Carlos Williams was not a spy, but a country doctor, who cheated on his wife a lot, and died at the age of 80, probably in his own bed:

Come live with me and be my love,
And we will all the pleasures prove,
That Valleys, groves, hills, and fields,
Woods, or steepy mountain yields.

And we will sit upon the Rocks,
Seeing the Shepherds feed their flocks,
By shallow Rivers to whose falls
Melodious birds sing Madrigals.

And I will make thee beds of Roses
And a thousand fragrant posies,
A cap of flowers, and a kirtle
Embroidered all with leaves of Myrtle;

A gown made of the finest wool
Which from our pretty Lambs we pull;
Fair lined slippers for the cold,
With buckles of the purest gold;

A belt of straw and Ivy buds,
With Coral clasps and Amber studs:
And if these pleasures may thee move,
Come live with me, and be my love.

The Shepherds' Swains shall dance and sing
For thy delight each May-morning:
If these delights thy mind may move,
Then live with me, and be my love.