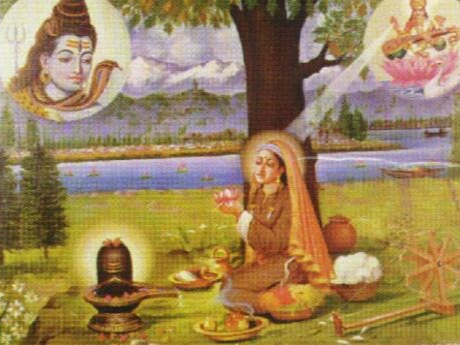 Lalla, or Lal Ded, was a Kashmiri mystic who lived in the 14th century at the height of Kashmiri Shaivism. Though she was a Hindu and a yogi, even Shah Hamdan, the great Sufi teacher who was her contemporary, recognized her as a saint. The best translations are those of Indian poet Ranjit Hoskote, who worked directly from the old Kashmiri, and who incorporates into his translations the inconsistencies of style and diction and textual variations that stem from the nature of these ecstatic utterances passed down by word-of-mouth over the course of centuries before being assembled into a written canon.

I'm towing my boat across the ocean with a thread.
Will He hear me and help me across?
Or am I seeping away like water from a half baked cup?
Wander, my poor soul, you're not going home anytime soon.

Here Lalla is either pulling her vessel (her body?—but if the vessel is her body then who is doing the pulling?) through the water or is she herself the water? At any rate, it seems not to matter, either to the nameless He (one presumes it is God) because she enjoins her soul (not her body, her soul) to continue to wander. It's a lot of thinking packed into four short lines, far indeed from the palliative and pithy epigrams one has become used to in spiritual literature.

Indeed, Lalla explores a fragmentation of the self that feels typical in contemporary discourse but at the time the great philosophers of Yoga were only beginning to wonder what the nature of the individual human self was. In Lalla's poetry the question was never simple and never resolved:

He who strikes the Unstruck Sound
calls space his body and emptiness his home,
who has neither name nor color nor family nor form,
who, meditating on Himself, is both Source and Sound
is the god who shall mount and ride this horse.

Gods and humans seem equally confused, equally desirous of knowing their own natures. In another short verse Lalla skewers secular life as well as the yogis and Muslims who practiced their own kinds of asceticism:

Gluttony gets you the best table in the town of Nowhere,
fasting gives your ego a boost.
Slaves of extremes, learn the art of balance
and all the closed doors will open at your touch.

What Lalla called for, in her poetry, was a turning away from received knowledge and the institutions of religious thought and an embracing of an experiential learning based on the sensory knowledge of the body in its many and varied physical forms.

Most importantly, Lalla deviated from the prevailing Vedanta philosophy at the time which held that Brahman, the creative energy of the universe, was inactive and that the entire universe was maya or illusion. Lalla instead subscribed to Kashmiri Shaivism, which held that the entire existing universe of matter and energy (Shakti) was a manifestation of universal consciousness (Shiva), real and eternal.

But is it still interesting to try to think about the relationship between "matter" and "spirit?" Which could mean "Shakti" and "Shiva" or "earth" and "heaven," as you like? The humor and whimsy of the spiritual poetry makes sure the work is always on the reader, always on the practitioner to continue to think and search, not in an abstract way but in the actually physical world. Because if it isn't just illusion, or a temporary world waiting to be dissolved in favor of a promised "afterlife" or vision of Biblical "heaven," then what's in the world, its blessings and failures, actually matters. A spiritual practice of yoga is not separate but is the same as a life lived in solely material terms.

Here is a verse that deals with this issue and also demonstrates some of the exciting shifts in diction that would not look out of place in a journal of contemporary poetry:

Now sir, make sure you've corralled your ass.
Or he'll champ his way
through your neighbors' saffron gardens.
No one's going to stand proxy
when it's your neck on the block.

Lalla's poetry puts me in mind of the childhood game of "Hide-and-Seek," because when you are selected as unique—the only one in the universe—you are alone, abandoned by all the other players. You hope to touch them while they evade you and head back to God. You are alone with God in only one case: before you start your endless search. There you are, crouched down, completely ignorant of the wide world around you because your hands are over your eyes.

In just a moment you will be allowed to Seek. Count to ten.