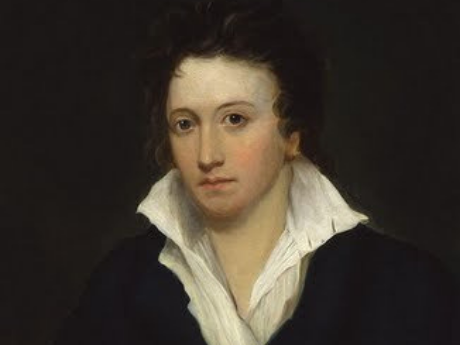 The sun is set; the swallows are asleep;
The bats are flitting fast in the gray air;
The slow soft toads out of damp corners creep,
And evening's breath, wandering here and there
Over the quivering surface of the stream,
Wakes not one ripple from its summer dream.

There is no dew on the dry grass to-night,
Nor damp within the shadow of the trees;
The wind is intermitting, dry, and light;
And in the inconstant motion of the breeze
The dust and straws are driven up and down,
And whirled about the pavement of the town.

Within the surface of the fleeting river
The wrinkled image of the city lay,
Immovably unquiet, and forever
It trembles, but it never fades away;
Go to the...
You, being changed, will find it then as now.

The chasm in which the sun has sunk is shut
By darkest barriers of cinereous cloud,
Like mountain over mountain huddled — but
Growing and moving upwards in a crowd,
And over it a space of watery blue,
Which the keen evening star is shining through.

I love Shelley. I have a tattoo of the sketch he made for his boat, in which he soon after drowned. But like many of us who love Shelley, I do not love all of his poems. There are many Shelleys. And I like a lot of them, but life is too short (he would know) to read another verse drama.

One thing that fascinates me about Shelley, and which is probably an accident of his short life, is how many of his fragments survive. Perhaps if he'd lived a long life he would have polished some of the fragments off, or have suppressed them altogether. As it is, Mary Shelley kept everything and eventually, when his father finally died, was able to publish it all, and we are all lucky to have it.

I like the fragments so much because they are like our poems. It's hard to feel close to his long, didactic allegories. The fragments are Shelley in an unselfconscious mode; they feel like they were written very quickly. He was living in Italy ("paradise of exiles" he called it) scribbling them down in the woods, in the baths at Caracalla, in the Coliseum. His life was falling apart around him, his children were sick and dying, his attentions were split between so many women. But he never stopped writing, he never stopped beginning new projects.

Another reason I love the fragments is that they seem almost like exercises. There are small pieces he wrote that are remarkably observant, or incredibly compressed. I like to think he was just practicing, but inadvertently he was creating a beautiful body of sharp, clear poetry. It just happened to be unfinished, and had he lived, he would never have considered showing it to anyone. In fact, there's a line in this poem I'm about to show you that is unfinished, and depending on whom you trust, it either says "Go to the…." or it says "Go to the East…"—either way there was more to the line, but he never got around to it.

So much of Shelley's reputation is as a flighty dreamer, an ungrounded skylark who did not live with us here on Earth. That's why "Evening, Ponte Al Mare, Pisa" is such a surprise and delight. What could be more vivid? What could be more specific to a moment in time, and a place on this Earth? This poem reminds me that it is my job as a poet to be present in the moment, and then to carry that presence I feel into the poem, in hopes that others will feel it too.