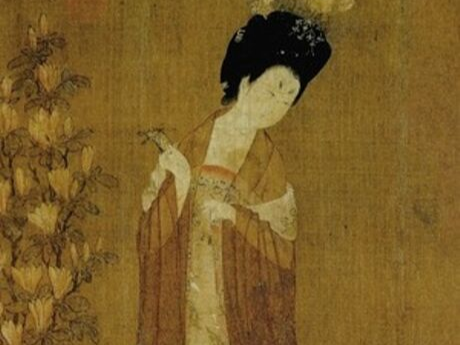 To Wen Feiqing On a Winter's Night

In bitter longing I sought poems to recite beneath the lamp,
sleepless through the long nights, fearing a cold quilt.
Leaves strewn across the courtyard lamented when winds rose;
through gauze window curtains I grieved at the setting moon.
Thoughts scattered and released, at last I found fulfillment:
through the emptiness of rise and fall, I saw True Mind.
Now roosting in seclusion, away from paulownias,
an evening sparrow twitters, simply circling the grove.

Yu Xuanji (844-868), a courtesan and female poet, wrote during the Tang Dynasty which was also considered the golden age for art and literature in China. She is still, in many ways, a mysterious figure as she lived her life as a concubine, wife, a Daoist "nun," and as a resident of Chang'an's pleasure district. Executed at the young age of 28 for murdering her maidservant, and leaving behind one book of poems, her life has been shrouded in intrigue as well as hearsay. While male Tang Dynasty poets Wang Wei, Li Po, and Tu Fu achieved great fame, Yu Xuanji is a lesser known figure due to her unorthodox and brief life as well as the more marginal roles delegated to women in Chinese culture for centuries.

Of her work, her voice was honest and disarmingly simple as she embraced themes as disparate as nature and sensuality. She wrote openly of her melancholy, despair, solitude, as well as her affairs with lovers. Her power emboldened me. Her straightforward diction, largeness of images through the seemingly mundane and small, as well as her embrace of the sweeping visages of the Chinese landscape, felt cinematic and wild. Her poems were as much paintings as they were verbal storms. What fascinated me most about her poems was the tension between ferocity and calm. Lines such as, "Clouds of unhappy passion struggle in one dream against each other. / The immortals' faces bloom forever, beyond even the flowers," from her poem "Fragments," demonstrate an intricate friction at work as she summons a beloved while exploring the impossible terrain of love.

In "To Wen Feiqing On a Winter's Night," I am startled most by the appearance of the words "True Mind" after a rise and fall between bliss and melancholy, fulfillment and longing, presence and absence in the image of scattered leaves. All the world is restless in seasonal turbulence and, at last, the lone sparrow circles the grove. The poem holds the possibility of addressing multiple subject matter: love, artistry, philosophy, community, isolation. Translator Leonard Ng notes that the poem might have been written in a period when Yu Xuanji let go of her secular life to embrace the Daoist doctrine, thus the internal struggle between the earthly and divine. Wen Feiqing is an alternate name for the poet Wen Tingyun and the paulownia, also known as "the princess tree," is planted when a baby girl is born and the rapidly growing tree matures when the girl is of marrying age.

As the speaker grieves, laments, fears she wrestles within herself to achieve, finally, the sacred. Her truth seems to rest in the movement away from romantic love and toward a state of fulfillment in a solitary/meditative existence which feels all but resolved. It is her brutal emotional struggle which makes itself apparent in Yu Xuanji's work that renders her poems so astonishing even after eleven centuries have passed. Her distinct female history and fierce persona took hold of me and did not let me go. I found myself bound to a woman whose work was spare, bold, and tragic and whose desire lead her to places as perilous as it was profound.