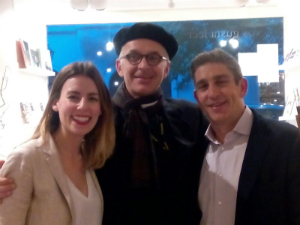 In the back courtyard of the Episcopal Cathedral in Madrid when I first arrived under the behest of the Amy Lowell grant, a poetry series started. Organically. Sometimes I have pushed this or that thing into existence in my life, but the older I get—now early fifties—I have experienced the joy of being led by a will greater than my own. This series feels propelled by something greater than me. A groundswell passion for poetry to spread outside the United States. To share sentiments and ideas between cultures and languages. I want to share my joy with you.

I relate to Thomas Merton's prayer, "My Lord God, I have no idea where I am going. I do not see the road ahead of me. I cannot know for certain where it will end. Nor do I really know myself, and the fact that I think that I am following your will does not mean that I am actually doing so." This could be my anthem.

In 2009, Richard Blanco came to visit me when I was working for the bishop here in Spain. At the time Richard was somewhat disheartened that his third book of poems had come with little public embrace. All this would change when President Obama´s team called him to read at the president's second inauguration. But we didn't know that then. Adrienne Rich had just died, I was freshly ordained, it seemed like only a moment ago Alice Quinn had been in the audience in the chapel bidding me well, and as I looked out my dusty windowed doors, my little balcony overlooking my calle, children yelling in the school across the way, I said to Richard, "Why don´t we have a reading here? You could read in Spanish!" I said it with all the gee-whiz enthusiasm that reflected my Midwestern roots. He agreed, although he is more comfortable in English. Like two little kids setting up a lemonade stand, we made posters, got the deacon at the church to string up a faulty searchlight he slung over a branch that made Richard squint and blink and the bishop made empanadas and we had ourselves a reading for fifty people—some from the church, some from the street, a mentally ill man came to play the flute and scoop up most of the empanadas and a conservative missionary from Tennessee came who wondered how he could get the poetry enthusiasts to both join the church and go fundamentalist and conservative. Such is the world of poetry.

I work as the national secretary for the Episcopal Bishop of Spain. That title always requires explanation. And my unlikely hire requires another sentence or two. The Episcopal church began here, embraced by Spaniards in 1865, after the Inquisition ended: many disaffected Catholic priests wanted another option. Franco came to power about fifty years later, wishing to eradicate of all things, the Protestant, and so the church, after he shot three priests in the head, went underground for the length of his dictatorship.

The well-known Spanish writer, Miguel de Unamuno, died under house arrest in Salamanca while worshiping in one of our churches. He had befriended Padre Atiliano Coco, one of our martyred priests. His choice of worship was a radical gesture. A fitting author, then, to represent us.

We are a small branch of the church, Spanish-speaking: making up about fourteen thousand members that belong to the 80 million world-wide Anglican Communion. I'm the only English speaker in the place.

How did I get here? The grant brought me here because my bishop from Miami, at the time I was graduating from seminary at Yale, suggested it. I'd never been to Madrid. But I wanted, among other things, to learn Spanish, I felt it important to my future ministry. I thought it was a one-off year and then I'd be back in the States, working a job in a parish somewhere in Florida. But after a year here, the bishop of Spain asked me back, permanently. In part to help his church be better known to the English- speaking world. I was flattered. Then shocked. Yet I was pleased to be hired with so little effort of my own will driving things.

Moving over here now two years ago, I thought, "Why not continue the poetry series?" Perhaps, I thought, it might be a way to bring some life into the Cathedral and draw attention to this unsung place. Poetry and the church used to be much more intertwined. Much of my life, it seems—from the time I set out to honor the old homosexual at Brooks Brothers—has been about drawing attention to the unsung. "Attention must be paid," Willy Loman's wife says in Arthur Miller's Death of a Salesman.

Greg Pardlo, Noel Valis, Mark Wunderlich, Mark Doty, Marilyn Hacker, Carl Adamshick and Iva Ticic have now all come to give readings since that initial thought of mine. Some readings and conversations we have given in the Instituto Internacional where Federico García Lorca once read. For Greg's reading, which followed on the heels of his Pulitzer win, we had over one hundred in attendance. In a strongly Spanish-speaking environment, our audience tends to be ex-pats as well and Spaniards seeking to be exposed to the English language.

Early on I started with readings in the Cathedral, but our sound system is old and faulty with many awkward moments of high pitched screeches coming through the microphones. So I branched out to an English-speaking bookstore called Desperate Literature, run by Terry Craven and Charlotte Delattre, who worked originally at Shakespeare & Co. in Paris. They are going to help with posters and making broadsides of each poet´s work going forward. We might make T-shirts. Los Editores, a Spanish speaking bookstore, is where I have held interviews and Spanish events.

Adamshick wrote of his time: "Reading in the Unamuno Series was a delight. Spencer has found an audience for American poets in the very lively neighborhood of Malasaña in Madrid. I was able to stay for five days in modest quarters, go to the Prado and the National Library. The whole experience helped broaden my understanding of world poetry."

At the moment I invite about four writers a year. I give them a free place to stay in the Cathedral. Humble, a large crucifix on the freshly painted yellow walls overlooking the courtyard with jasmine vines and an avocado tree, two twin beds, an old wooden closet with mirrored doors that swing open on their own accord, no central heat and a shared bath, is what we offer. All next to my own small apartment on the top fourth floor, that I run in and out of, my cassock flapping, on my way to services or office work.

Elizabeth Moe, a Spanish Literature & Culture PhD candidate at Rutgers and student of Mark Doty's, has been helping me here in Madrid since February. She has come on board as the Director of Cultural Programming: publicizing the series, building our online community, and participating in events. She recently interviewed Richard Blanco in Spanish at Librería Los Editores and is assisting with the on-air radio interviews each poet does. Elizabeth is based in Madrid writing her dissertation, "Reviving a Corpus: Lorca's Embodied Archive and the Regeneration of Spanish Historical Memory Activism."

We can be found on:

The Episcopal Church was always known for its love of the word over the image: hymns and schools are what we're known for. This series continues that tradition.

The Gospel of John talks about signs. And surely when I saw, with gratitude and shock, Alice Quinn, director of the Poetry Society of America and the midwife who saw "The Clerk's Tale" into existence at The New Yorker, standing and singing at my deaconate ordination during the worst blizzard to hit New England, that, friends, that was a sign.

Something is happening through me, not because of me. Like the way a poem or a church liturgy happens.