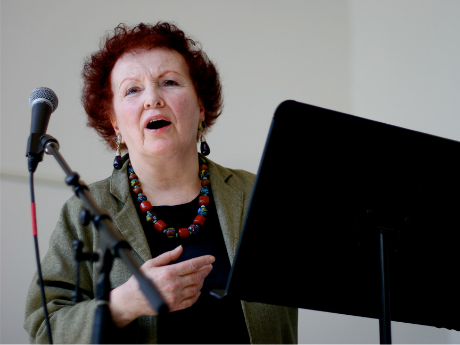 I was conceived in Paris, the unexpected outcome of a love affair between a French archivist and a French-American priest whose mother claimed Irish descent. In her ninth month, my mother crossed the border into Belgium where I was born soon and soon after packed off to the Catholic sisters, my stern caretakers for the next eight years.

I'm not sure what patron saint of journeys I need to thank for my escape from Europe before the World War II occupation of the low countries, but landing on the south shore of Long Island didn't take long to make me a devotee to what America lived by; Five and Ten cent stores, movies, free public libraries, saying the pledge at the start of class, mothers who made cupcakes, the heaven of candy stores, tootsie, mello and hot dog rolls. And I name only a few delights from that rich arcade that dazzled me in my early years in the USA.

In Cleveland I lived with a piano tuner who worked for the theatre trade, and I read letters for a nickel to illiterate women near 105th and St. Clair. I heard "Tiptoe Through the Tulips," and "I've Got Rhythm" from the stage of the Alhambra Theatre. In Mrs. Schmellar's music class I sang alto to "I've Been Working on the Railroad," "O Susanna" and "Let My People Go," and joined the glee club at W.C. Mepham High School in Bellmore, New York in that time before the electric guitar and when public singing was still in style.

Many of the poets I first loved were New Englanders, Emily Dickinson, Robert Frost, Amy Lowell, or Midwesterners, Carl Sandberg and Edgar Lee Masters. From the West Coast Robinson Jeffers stirred me with his disdain for mankind and love of hawks, horses and cliffs. The southern poets, Sydney Lanier and Edgar Allen Poe, ranked high in my alphabetically arranged journey of poets listed in the Merrick Library.

But I was also curious about my identity and studied French literature in high school, read French poetry, and grew fascinated by things Gallic to which I ascribed an elegance clearly lacking in the workaday world of suburban New York.

In the 1950s I had joined that world as a Gal Friday, switchboard operator, secretary in the city and sometimes found work in the blur of big corporate offices. While employed at the America Cyanamid company, I discovered I was not an American citizen and technically subject to deportation. A backpack trip to Europe in the fifties led to a meeting with my scholar mother, living and working in England. I suppose in some perverse way her cool reception made me all the more anxious to assert my sense of being more than just American but multi-national, European. But that was in another era, although my sense of myself as a member of a global village hasn't changed. How do I define myself? I'd have to describe myself as a narrative, lyric poet who writes in American English. I am an American citizen, long and well-married to a Brooklyn born free lance writer whose parents were immigrants from the Polish Pale. I am an American whose roots are European although I certainly keep in mind that my true ancestors were also one-celled plants floating in water. My interests are varied, yet the mysteries of my French family and their history continue to inform and sometimes to haunt my work.

Being an outsider to strong family ties, I do take a global view of things and am an enthusiast of Chinese poetry in translation, especially of T'ang poets, Li Po and Tu Fu, Meng Ciao, and Li Ho, and of Song Dynasty lyrics. I am also excited by the native American poetry of Joy Harjo, Linda Hogan, Simon Ortiz and the great Russian poets, Ahkmatova, Mayakovsky, and Mandelstam continue to move me. As a teacher of poetry workshops here in New York and around the country, I use poetry in translation to share with students. Jacques Prevert, Tagore, Milosz, Rilke, Neruda, Lorca, Gabriela Mistral, and Polish Nobelist Wislawa Szymborksa, Japanese woman court poets, Ono no Kamachi and Shikibu are favorites and all appear to have found gifted translators. Certainly, their poems sing to me in English.

Walt Whitman writing more than a hundred years ago spoke with the exuberance, the optimism of an America who believed in the immense energy of our democracy. His long, vigorous, prophetic lines, their sense of the inclusive, seem distinctly American to me. Independent, typographically rebellious, throughout his writing career keeping pretty much to his style and sometimes irreverent themes. e.e. cummings also strikes me as quintessentially American. And I would say the same for Marianne Moore, an independent spirit, idiosyncratic and fanatical lover of art, animals and lifelong fan of the Dodgers and the Mets. Hart Crane in his love of urban scapes, of machines and technology also seems to me a poet in the American grain, and certainly, the quirky and innovative, Gertrude Stein, although France claimed a good part of her adult life, was American to the core.

I think of cowboy poetry in Montana and Wyoming, of the poetry of the five beat blues sung in delta country. Poetry slams seem to prosper from coast to coast and in coffee shops and colleges around the country. But they aren't regional really. L.A. and New York appears to vie for hip hop and rap (Allen Ginsberg compared rap to 15th century English Skeltonics) expertise. Those who are in the know tell me New York rap lyricists are superior to their West Coast brothers. But here, I am out of my depth.

The golden age of American poetry shaped in the late 20th century will probably continue to prosper and at the same time break into increasingly fragmented movements marked by ethnic, gender or sexual affiliations. As new immigrant groups find political power so will we hear their voices in poetry and song. Love poetry and personal unburdenings will flourish in an increasingly technological age and poetry as performance will keep pace with poetry on the page as e-mail, web sites and mass communications thrive.