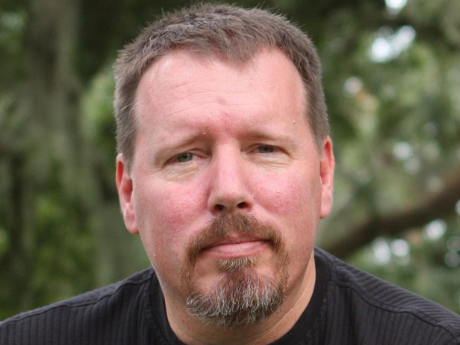 At 17 hands, their high-traction shoes clatter on the asphalt

for their wild-eyed vision of Molotov cocktails, stones, hurled debris,

the adrenaline of the boulevard ringing in the horns of their ears,

of flashbulbs cracking the night open in a pure shock of light,

illuminating the signature of blaze and star on forehead and nose

as polycarbonate batons sing past their stiffened ears before they wheel

and turn, the boot heels of officers digging in, spurring their flanks,

at the bit, slobber straps wet and shining, their wide flat teeth

and smell of burnt exhaust, with the human calculations of misery

and pain, trajectory and loss, brokenness, ruination, the factory

of tears in its awful manufacture gone unbridled in civilization's

rough shell, and still the officers urge forward as the missiles

trace a bright geometry, patient within the night's

dark fabric, the obscene beauty of it lost on no one,

as the clarity of hooves hammers against the building facades

and rises to the upper stories, just as hooves have done for millennia,

clanging through Damascus and Prague, Vladivostok and Rome,

with hussars and Cossacks and mamluks, lancers and dragoons

forming up horses abreast, the psychology of muscle and height

at the Battle of Carrhae, in 53 BCE; Napoleon's cuirassiers riding

headlong into the Highland squares at Waterloo; Shingen's cavalry

overrunning arquebusiers on the snowy plains of Mikata in 1573—

and just as horses did in the days of old, these horses shove and shoulder

through the protestors in their human chicane, the trampled left

curled on the roadbed behind, wailing, as police lights strobe

the moment in a wash of red, color standard for the God of War,

the god of helmets and boots and stirrups and sweat-soaked horse blankets,

who promises steamed oats and top cut alfalfa at the road's end,

god of the threshing hooves, the riot god, who quickens panic in the driven horse

by application of the baton to the curvature of the world in its bony skull,

the god who stirs their blood into action against the refutations of consent,

pressing them on, on into the valley of placard and protest, effigies

and simply rose up in flame, up to the howling god, who calls on the horses

to do the same, exhorting each to ignore the monocular field within its crazed eye,

to view the crowd from those rare heights where flame burns free of its fuel,

to rise up on its hindquarters, as in a great statue of terror, its majesty irrefutable,

the god of the loudspeaker commanding them to spark pavement and stone,

saying—Bring your hooves down hard, my horses, bring them down.


"Horses" originally appeared in The Massachusetts Review. All rights reserved. Reprinted with the permission of the author.

The domain of poetry extends to the horizon-line of our experience. So, I don't see the political as being something which exists outside of poetry's compass. That said, I do appreciate those poets who focus on the political in their work. Back when I worked as an assistant machinist in Fresno, I read Phil Levine's poem, "They Feed They Lion." That poem spoke to my experiences in a way that no journalist or politician or everyday conversation had ever done before. I was changed by it. Augmented.

My first two books focus on the war in Iraq and that which follows war, or what some might call the 'end' of the war. One of the critiques I would level against my own work is that it is the poetry of a soldier and a veteran. When will we hear the voices of those the rifles aimed at? Years from now, when Iraqi children have grown up and picked up a pen—what will we learn from their verses then? And, will we be listening? I look to Carolyn Forche, Yehuda Amichai, Martin Espada, Janos Pilinszky, Philip Levine, and—how much space do I have here?

If I'm going to wag my finger or chastise anyone, then I'll wag my finger and chastise myself. I have my own work to do and little time to do it. This is true for us all. I do think that 'American' poets and poetry would benefit by having more poets traveling overseas. In fact, I'm one of the editors working on a book whose primary intent is to address this question. It's an anthology (The Poet in the World) and it'll be out later this year.

There are more than 300 million people in America and several billion people on the planet. Precisely because the world is full of so many voices I suggest that there is more than enough room for all. Who will listen, though? And why? I suppose this is the underlying question… What words must we give to the time we live in?

Yes. We should be alert and on guard against editorial censorship—especially the internal censorship many writers, perhaps all, carry within… It's a tricky line, though. I've been fortunate enough to work with incredibly gifted, savvy, and experienced editors. When April Ossmann edited my first collection (Here, Bullet), she suggested that I cut in a couple of places that might have caused some writers to cry foul. I originally had quotes from a well-known politician in one of the section breaks and April offered her reasons for why I should cut them from the book. Doing so would change the overall political frame in which the poems existed at the time. Once I heard her out and thought it over, I realized she was right. Ironically, editing and erasing—in this instance—actually opened up the larger political dialogue I wanted the poems to be capable of offering. It took the poems from what might otherwise have been a predictable polemic stance and returned the poems to their native political landscape, a landscape which is much more nuanced, complicated, and human.

I could be wrong, of course, but I think we're drifting in the calm between cultural shifts. The national psyche appears polarized, as if two continental plates have ground into one another and now they've reached a point of apparent stasis. It's a deceiving vision, though. How will the accumulated steam vent its way out once the pressure becomes too great? And what will this mean for the line in American verse? Drive through parts of Baltimore and Milwaukee and Denver and Fresno and I wager you'll think you're driving through the bombed-out remains of a war zone. Go to the emergency rooms any day of the week. Stand in the unemployment lines. Stand at the bus stops. Stand in the liquor stores. From the environment to the lives of those beaten down, we have a duty—as writers and as human beings—to apply the poetry of witness Forche speaks so eloquently about in her introductory essay to Against Forgetting. The conversation I'm speaking of here is a multi-generational one. The poets of the future will take up from where we've left off. And so the questions remain—what verse will we give them? What poetry will we give to each other?