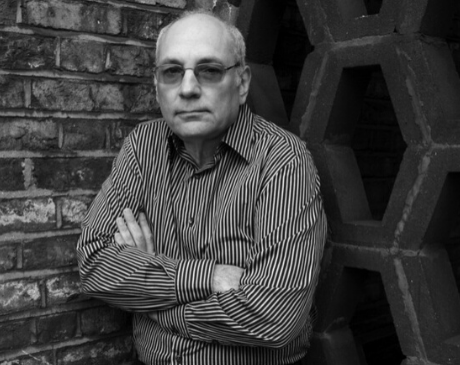 In utopia they don't got no rules and Prime Minister Cameron's "criminality pure and simple" is reserved for politicians just like him. In utopia the monkey lies down with the rhinoceros and the ghosts haunt the ghosts leaving everyone else to fends for themself. In utopia, you lose the battles and you lose the war too but it bothers you less. In utopia no one tells nobody nothin', but I gotta tell you this. In utopia the plans are ornament and expectations dissolve into whim. In utopia, here is a pivot. In utopia, love goes for the ride but eros's at the wheel. In utopia, the words sing the songs while the singers listen. In utopia, 1 plus 2 does not equal 2 plus 1. In utopia, I and you is not the same as you and me. In utopia, we won't occupy Wall Street, we are Wall Street. It utopia, all that is solid congeals, all that melts liquefies, all that is air vanishes into the late afternoon fog.

Do you value the examination of the political in poetry?

Not necessarily. Depends on whose and what they say.

If so, what experience(s) taught you its importance?

The picket line, that is, the recognition of competing interests, as much in poetry as any other sphere. Dickinson: "Don't you know that 'No' is the wildest word we consign to language."

If you write about politics frequently, what issues, difficulties, advantages and disadvantages do you negotiate?

I address this in a recent essay, "You Can't Evict an Idea: The Poetics of Occupy Wall Street," published in Jacket2.

Which poets do you draw on when conducting such negotiations?

None. Responsibilities are for parents, teachers, and citizens too, not for poets. Poetry abhors responsibility.

Is there room for romantic or rugged individualism in political poetry (as opposed to a capacious perspective of Whitman or other past poets)?

I am almost sure Walt Whitman was a romantic and rugged individualist, but then I tend to read a lot into poetry. On this matter, though, Hart Crane is my role model. I am about as capacious as the next guy. Mescal is my drink of choice this year.

If so, where is its place?

Section 3, quadrant 822.3856, on uneven tide warnings. However, available room is subject to prior sale for revenue.

Where do you draw the line between poetry and propaganda?

What is the purpose of such a line?

Should today's poet be concerned with editorial censorship?

Well my motto is, should never say should, should you? But I am tempted to make an exception here.

What are your thoughts on shifts in the state of the political voice in contemporary poetry, from the early modernist to the beat poets and black arts movement, to today?

1. You can bring water to a horse but you can't make it ride.
2. All poetry is conceptual but some is more conceptual than others.
3. [Under review by Tom Raworth.]
4. Ambient difficulty leads to poetic license.
5.The taste of madeleine ain't what it used to be.
6. The liars move one, the lies remain. Such lies the truth engrains.

Where are we now?

Where are we going?