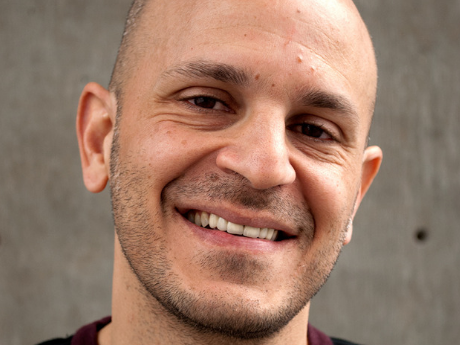 After gluttony the insatiable rain

You climb up to the highest post
A lemon tree

To the concrete with a twig
And unsure what you believe

Of the earth you ravaged
Mint and thyme

Your cranium a Worf's
Your future a swallowtail

Of course I do. Shakespeare valued it, so why wouldn't I. He did so in some of his sonnets, and of course in his plays. Didn't William Blake concern himself with the political also, perhaps at as deep a level of engagement as that of Milton's? There is, however, a complicated difficulty mainstream American poetry, its institution, has always had it seems with engaging the so-called political in poetry. I don't know what defines "mainstream," but there is certainly an "establishment" that wields much influence on the way poetics are run. Isn't that in and of itself "political?" Are there certain types of poets, say, an Arab American poet, a Palestinian one, who are expected to examine and negotiate the political in poetry, to fulfill such function as it were, and to be judged and adjudicated by it?

First, we'd have to agree on the definition of "politics" in poetry, don't we? The political in poetry is always born out of the incessant assault systems of power and knowledge impose on the individual spirit, on ways of seeing, and on speaking truth to power. This does not have to always reach intercontinental dimensions, or transnational borders. Poetry, in part, illuminates and summons the language of its time (more so than its place), so there is still much to be desired in what poetry speaks. I think all important poets have tackled and negotiated the political in their poetry to varying degrees. The political is wide-ranging. Of contemporary poets, I have tapped into, to name a few, the poetry of Mahmoud Darwish, George Oppen, Z. Herbert, Michael Palmer, Venous Khoury-Ghata, and Marilyn Hacker.

An artist has no responsibility to engage his or her own politic in a direct sense. She or he has the responsibility, however, not to easily dismiss or disdain such a task when other poets take it on. We hide much behind the pseudo-objectivity of aesthetic quality when we dismiss others. There is no escaping the fact that these so called aesthetic judgments are significantly bound to foundational, epistemological biases and barriers within the history of the American institution of poetry; an "institution" that has its counterparts in every language and culture. Here is an excerpt from Hannah Arendt's The Revolutionary Tradition and Its Lost Treasure, on equality and authority. It is as arguable (within the possibility of being outdated and impure in its conclusion) as it is accurate:

To avoid misunderstanding: The principles for the selection of the best as suggested in the council system [...] are applicable only within the political realm. The cultural, literary, and artistic, the scientific and professional and even the social elites of a country are subject to very different criteria among which the criterion of equality is conspicuously absent. But so is the principle of authority. The rank of a poet, for instance, is decided neither by a vote of confidence of his fellow poets nor by fiat coming from the recognized master, but, on the contrary, by those who only love poetry and are incapable of ever writing a line.


Is the political in poetry subject to the same "principles for the selection of the best" in poetry? Or are those principles applied differently to the political in poetry; if so, why and by whom are they applied; certainly not by "those who love poetry and are incapable of ever writing a line"? I am not saying "those" should be the final arbiters. I am asking, who are the guardians of art? That is fundamentally and equally an aesthetic question as it is political.

I do not think American poetry has had any shortage of visionary poets whose artistic reach is beyond the American navel, and into the "big dialogue." Perhaps the question for me is, again, back to the "establishment's" influence on truly opening up, embracing a wider range of poetics at the center, thus displacing the calcified core. Of course the "big dialogue" is a political one, in an age of the nation-state, in an age when to belong to a race or ethnicity is an "inferiority" compared to belonging to a "nation," and not just any kind of nation. I find the comment of the Nobel Prize secretary laughable and equally narcissistic to any defensive American response. The Nobel has been historically tainted by big and dirty politics. However, is American poetry truly open-minded to the influence of its minorities, of its "minor tongues," and if so, is it a dynamic, perpetual open-mindedness? Similarly, it is not a question of whether American poetry is open to world poetries, to "big dialogue," but how is that openness determined or governed in America, by which geopolitical, cultural interests and biases. Western Europe had a different recent historical experience, so its idea of "big dialogue" is a different one. In one sense the conversation about literature is still a ping-pong game in a Western court, and we are to engage in a dialogue between which of the two is holier. In another sense, Capitalist literature is a phenomenon whose most intense manifestations are in America; has it become the opposite spectral echo of Socialist realism, for example? If there are considerable parallels, we are in serious trouble.

I am not sure I fully understand the question or perhaps the importance of the (critical) distinctions that seem to me as unnecessarily fixed. Why is Whitman's capaciousness not romantic, or rugged in "Song of Myself," or in "The Sleepers"? Mahmoud Darwish's "Mural," is also a similar kind of poem, both capacious and romantic. The idea that the political in poetry comes already framed (within a "room") into the minds of many readers is, again, a problem of "establishment" and not of poetry per se.

What does it mean that Ezra Pound was a fascist, mad or not; or that Gertrude Stein spoke apologetically of Nazism at some point? Of course propaganda is where a "political poem" fails, but who defines what "propaganda" is for Langston Hughes or Thomas McGrath, for example? And isn't unimaginative sincerity or earnestness in the so-called confessional poem the equivalent of propaganda in a political poem? The notion that a bad political poem is more dangerous than a bad non-political poem is laughable. They are simply equally bad poems. The horrid political views many great poets had and never explicitly addressed in their poetry is also another mirror image, paradox, of this argument.

I don't think I can say where we are now, and even less so where we are going. It seems to me the answer exists in the historical circularity of aesthetic waves that come and go in America and anywhere in the world. What is happening today, whatever it is, has already happened before and will recur later on; the devil is not always in the detail, unless the devil is always an optical illusion. I am not trying to erase the notion of novelty or modernity. I am saying this: neurotransmitters have always existed; our consciousness of them has not always existed. I don't know, and I am not sure I believe anyone else knows, what determines the evolutionary in poetry, in aesthetics, especially now that we are two hundred years deep into modernity. Is poetry past the point of adaptation in the 21st century and is now focused on the smaller evolutionary processes of the spandrel and exaptation? If pre-modern poetry had wings that were used for temperature regulation, which then became wings for flight in the modern era, then what will become of its wings next? Is the contemporary poem in evolutionary limbo, no man's land, liminality? Is this unprecedented plethora of democratic poetic activities, this delta, the herald of massive evolutionary change that awaits humankind's relation to poetry, or will it be largely erased in due time, returned to historic methods of evaluation?

And what of the rest of the world who has always shared the human genome but has not been transformed by genetics yet in the manner we think we have? Don't we, sadly, other them (and their aesthetics) precisely for these reasons? The other is always a past; to be moved on from, and referenced back to a previous self we once were but have improved upon since.

For me, Whitman's "I hear it was charged against me" to be the quintessential, grand-fatherly political American poem. Its courage equals its cowardice; its knowing, its ignorance; its vision, its blindness; its grandiosity, its humility. I don't necessarily mean this in a derogatory manner. Weren't Henry Miller's "Tropics" the closest thing we've had to a second coming of Whitman? Was Henry Miller that more scathing in his prose of America than Whitman was in his poetry?

Recently, I find the notion of "Minor Literature," in Deleuze's sense of Kafka's literature, to be one of the more important tasks that poetry anywhere must undertake: how does a poetry (of a language or a people) cavitate its own center in order to fill it up with the periphery, displacing the periphery into the center, thus opening up new space for new peripheries to come in and continue the cycle of renewal, of regeneration? It seems to me all poetries in all languages are at risk for confusing tradition with authoritarianism; chauvinism about one's language is a delusion of purity among other things. It's the kind of thing that subjugates knowledge, science, for example, to the same old machine of power, of thought.

"I Begin by Invoking Walt Whitman," that beautiful and also violent Pablo Neruda poem: which American poet can write its like today and not be subject to shredding or implicit embargo? which American poet can write its like and be celebrated as the prototype of the "correct" political in poem? which American poet is lauded when writing about empire, and which poet is reprimanded, cut down to size, set aside into an all inclusive, democratic periphery with a sluggish centrality? Who are the authorized and unauthorized voices? How does that John Ashbery poem, "The One Thing That Can Save America" begin: "Is anything central?"

* * *
Fady Joudah's Alight is forthcoming from Copper Canyon Press. His first poetry collection won the Yale Series for Younger Poets, and his translations received a TLS/Banipal prize from the UK and a PEN USA award.