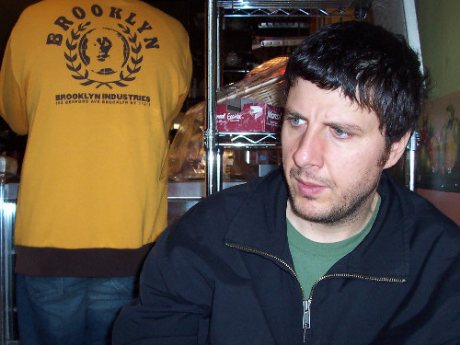 everyone has probably seen
rising through silent rooms

full of boxes or shelves

crossed by motes in the sun

for reading or placing
books on as you shelve them

it's easy to imagine working in a library

I say tomorrow waits for me
but I don't know

I might understand
why they call him a maverick

when he is really just a horse


Poem reprinted from Come On All You Ghost (Copper Canyon Press) with the permission of the author and publisher. Copyright © 2010 Matthew Zapruder.

I am not breaking any new ground in pointing out the great danger we humans are all in as a direct result of our American politics. It's something I think about all the time, as much as anything else, and it is inconceivable to me that this deep and pervasive worry and concern would not enter into my writing.

I am instinctively wary of the words "responsibility," "artist," and "politics" being used in the same sentence. It starts to sound like socialist realism, and makes me want to reach for my nonexistent revolver. So I'm not sure I would say I feel like I have a "responsibility" to engage, nor would I enjoy being told I have that responsibility. Nevertheless, when I sit down to write, I do think about making art that will be meaningful for other people. Politics and political concerns are very important to people, as they should be. So I suppose I do feel let's say if not a responsibility then at least a strong attraction to engage

Perhaps peripherally, this question makes me think about the poem "Responsibility," by Tomaz Salamun, which ends: "whom did God consult/ when he made a butterfly as it is/ when he could have made its legs six inches thick/ responsibility responsibility/baroque sustenance of the people."

I don't know what "the big dialogue of literature" means. Which is maybe exactly the problem this Horace Engdahl (if that is, in fact, his real name) is talking about. Climbing inside his Engdahlian brain with a little flashlight in my mouth I am assuming he means that American writers have an artificially limited area of concerns, an area that does not include the big issues like politics or war or the environment or inequality or whatever. That just seems so obviously wrong to me that it's not really worth arguing with. Or maybe I'm missing his point and he means something else. But it's getting dark in here and I want to climb back out.

This question gets to the heart of why this issue of poetry and politics is problematic. Propaganda is, basically, speech that is oriented above and beyond all other concerns towards convincing someone of a certain point of view. It's not primarily interested in nuance, contradiction, negative capability, beauty, generosity, an acknowledgment of complexity, whatever. While I can definitely in theory imagine propagandistic speech being in poems, and probably there are some examples I just can't think of right now, it seems to me in practice the spirit of propaganda is not naturally suited for poetry. That's not a statement of value, but an observation based on my experience as a reader and writer.

However, and this is something that it's easy to forget in our current political climate, not all political speech is inherently propaganda. There is a lot of room for speech that is political in its concerns, but which is not propagandistic.

Unfortunately, we have almost none of that in our political life today. Maybe political poetry can remind people that it is possible to engage with politics, and feel outraged and impassioned and committed in a very serious and meaningful way to justice and equality and even revolution through speech without being propagandistic.

To my knowledge, poets in America are not being censored, at least not in the way that we typically understand that term. If they are, I oppose it. Poets in other parts of the world are definitely being censored, if not killed, and this strikes me as self-evidentially horrible.

It has been said (by Eliot and Mallarmé) that the poet's task is to purify the language or dialect of the tribe. That doesn't seem to me like what we need right now. Our American language already goes through a daily and brutal process of purification. Certain terms are sanctified by the political pundits and repeated again and again until against our will they permeate our consciousness.

And commerce is everywhere in our language: metaphors of buying and selling, the Yelpification of all our experiences, turning us into little evaluators of the shopping experience, which is threatening to become all experience. Oh it's truly scary how colonized my mind has become, how often I walk down the street and see a sign or even just a color, and a terrible little corporate song urging me to buy something I don't need comes unbidden to my mind, producing the desire to spend.

In poetry, more than in any other form of writing, language becomes de-familiarized (Shklovsky), un-fossilized (Emerson), new again. That may be what we need more than anything else right now in order to liberate ourselves. In this sense, poets may have a great, secret, unacknowledged responsibility: not to legislate, but to give language a place to roam around a little and be free. Who knows, the fate of the world might even be in our hands!


* * *
Matthew Zapruder is the author of three collections of poetry:American Linden(Tupelo Press, 2002), The Pajamaist(Copper Canyon, 2006), selected by Tony Hoagland as the winner of the William Carlos Williams Award from the Poetry Society of America,and Come on All You Ghosts(2010). The recipient of a 2011 Guggenheim Fellowship, he lives in San Francisco, where he works as an editor for Wave Books.