Litany of Our Lady 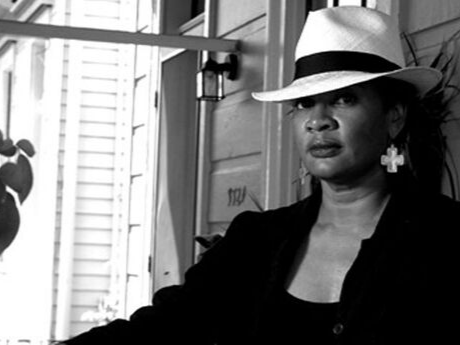 Litany of Our Lady

our lady of the sidewalks
the pavements and the crumbling brick
the mortar rock and oyster-shell roads
our lady of sorrows and sadnesses
of intolerable agonies tolerated daily
of drifters grifters scrappers and scrapers
our lady of dudes and dicks and pricks
of petty thieves and of whoremongers
of piss-swelled gutters
and dives
and the grimed over windows knotty-haired children peer through;
our lady
our lady of boys shot down in the dark
dying in open lots along lesser used roads leading out of town
of old men beneath interstates
sitting, standing, walking a block or so away and back;
our lady of lost and found and forgotten
cast-off ditched
of what was and never will be again
of aggrieved and bereft
accused indicted surrendered up to death
of old tar-colored women in plain or checkered housedresses
telling aloud their rosaries and rosaries
and rosaries of faith;
our lady of ladies
and of church-ladies-in-waiting
of young girls with hard uncertain breasts
and promises of school and school
and more school even than that;


our lady of go-cups and fictionary tours
cigar bars absinthe bars
of coffee houses open all night and churches closed all day
for-admittance-please-ring-bell-and-wait
and wait;
our lady of antiques dealers dealing in saints
in crosses, weeping cemetery angels, prayer cards
in praline mammies, cigar shoppe indians
in dwarf nigger jockeys whose heads have been lopped off
and stand
one hand outstretched, one cocked at the hip
seeming not to be waiting but bargaining dealing
for the return of their heads
their heads their perfectly round perfectly lovely
little nappy nappy heads;


our lady
our lady of tired buildings listing to one side
and brick-between-cypress posts that simply will stand
as houses themselves give way around falling-down stairs
leaving only a something
a memory of a structure
of spanish-tiled roofs and batten shutters
in a swamp
of a city
of ironworks and of plaster
o, lady lady
our lady of anything
at all

I was fortunate. I was able to go home to New Orleans after only a six-week exile—my house and possessions untouched by the storm. Most New Orleanians, however, weren't nearly so lucky. And all of us—returnees and emigrants alike—are living still in the aftermath of the floods of 2005. We bear all manner of physical, mental and soul-sickness, confronted at the same time with a medical community woefully ill-equipped to treat us and operating under its own heightened stresses. In the immediate aftermath of the storm, the coroner was the only public official I trusted—because he was brave enough to admit the truth: an accurate death-count would not be possible in the foreseeable future. Five years later, many who've returned still hold our breath whenever a hard rain falls.

In the first wave of homecoming, without adequate telephone service or amenities of any kind, we few who had resettled in the city often ran into each other and shared news at the one or two groceries then open. For the next two and a half years, we met on a nearly weekly basis at funerals and memorial services. There's a pandemic of grief that follows us still wherever we find ourselves.

In the wake of the storm, a crop of titular experts—some well-meaning, others strictly opportunistic—rushed to the head of the fray, not only reporting on the disaster but presuming to interpret for the broader public our experience and response to it. Contractors swooped in for the quick dollar bringing caravans of lowest-possible-wage workers, many illegal, nearly all exploited one way or another. And while we natives were in the throes of rebuilding our lives, and most residents were unable to return to or even enter their homes, a new enterprise sprang up offering "disaster tours" of our ravaged neighborhoods.

Until now, I have refused to write about any of this—out of a sense of respect, from exhaustion and an unwillingness to distance myself long enough to make sense of it. It's a feeling New Orleanians voice privately, among ourselves. Even those of us spared any visible material loss were consumed with more pressing concerns–to care for ailing family and loved ones and, especially, to find and to bury our dead.

Ironically, New Orleanians are a people who have always been on speaking terms with Death. Our religious and spiritual traditions teach that we bear certain obligations to our Dead. And the rituals through which we enact these offices are a measure of our humanity. But never, never could we have expected to be so sorely, so routinely tested.

New Orleans has survived repeated disasters, tragedies, cataclysms and reverses. Decimated by yellow fever, twice destroyed by fire, alert to the ever-present threat of hurricane and flood, she has confronted also the poverty brought on by the collapse of the port as major employer and the ebbs and flows of the oil and gas industry. And there is always the legacy of the once-vigorous trade in black flesh in the form of slavery, segregation and Jim Crow terror. Through it all, she remains. And those of us with enough of her in our blood, skin, teeth and bones are resolved also to remain.