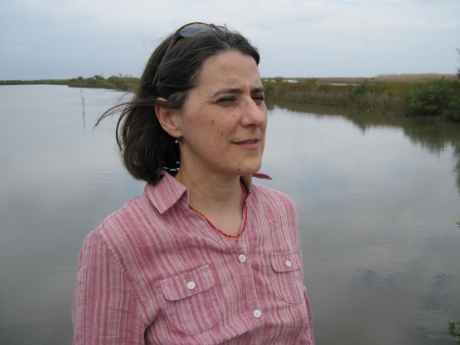 ...And God said, "Let there be a dome in the midst
of the waters" and into the dome God put

the poor, the addicts, the blind, and the oppressed.
God put the unsightly sick and the crying young

into the dome and the dry land did not appear.
And God allowed those who favored themselves

and in their conference halls. And then
God brooded over the dome and its multitudes

and God saw God's own likeness in the shattered
tiles and the sweltering heat and the polluted rain.

God saw everything and chose to make it very good.
God held the dome up to the light

the marsh until the loosened silt gave way
to a void, and darkness covered the faces with deep sleep.

As Hurricane Katrina approached Grand Isle, thirty miles from my hometown of Galliano, I was in New Haven, teaching at Yale Divinity School for a semester. I was staying in a student apartment alone with no television. I called my family in Thibodaux often to check on them. Eventually they evacuated to New Iberia, a few hours to the west.

Early on the morning of August 29, I looked at the storm path on the web and was relieved. Katrina took a last minute jag to the east, sparing Grand Isle (and New Orleans) direct landfall and also sparing it the dirty side of the storm. (In 1965 Hurricane Betsy, which also resulted in the flooding of the Ninth Ward, had leveled Grand Isle.)

I soon heard about the levee breaks. No one could find my uncle. I started having trouble getting through on the phone. Then—with no video of the city—I began reading about the extent of the flooding and the people's abandonment. The shooting on the Danziger Bridge seemed like a B-movie about sadistic law enforcement in the South. What was going on in the Dome? With Betsy having provided a model for response, how could this happen? (Lyndon Johnson called for all levels of government officials to put their differences aside the way a family would with "a sick mama." He flew to Louisiana before the last bands of Betsy cleared Baton Rouge.)

I wrote "Poem Found" almost immediately, the only poem I've written directly about the storm's events. I was seeing something like the interruption and reversal of creation, the heartless who floundered, and the strength of displaced people who lost and survived. Until then my work had focused on coastal erosion, a factor in what happened to the city, and an ongoing destruction of land and lives by encroaching water.

The chapel directors at the Div School asked me to put together a memorial service. I planned silence between readings except for an instrumental "Sometimes I Feel Like a Motherless Child." "People need to respond in song," I was told. I felt strongly we needed painful silence, to share the impossibility of victim response and to hear nothing to calls for help.

Generously, Yale offered to fly to Louisiana any student, faculty or staff member who wanted to go home. So after ten days, I was able to fly to Baton Rouge and down the bayou to Thibodaux. My uncle had been found, existing on his neighbors' barbecues as they emptied their freezers. My cousins and friends in the city were safe, but scattered with damaged homes.

Some of my poems about the dying marsh have been read as if they were written about Katrina. They are about loss of home and about elitist disregard for people and nature in favor of profit. That those poems speak to Katrina victims reminds me that the natural world and the dignity of individuals, and the events that threaten them, are inextricably connected.