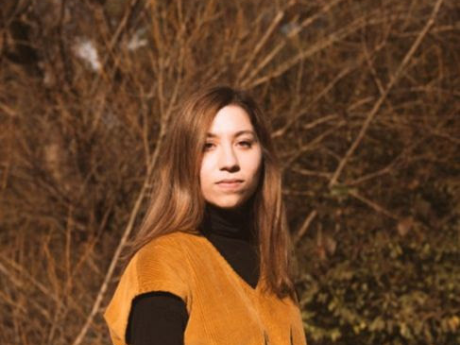 The poem Verklärte Nacht (“Transfigured Night”), by 19th century German poet Richard Dehmel, tells the dramatic tale of a woman as she explains to her boyfriend that she’s pregnant with another man’s child. She assumes he will leave her; he chooses to stay and to love the child instead. The story isn’t anything especially illuminating or powerful, but Arnold Schoenberg’s interpretation of the poem’s poignancy in his 1899 composition, Verklärte Nacht, remains one of my favorite links between music and poetry. This one movement work, which was originally written for string sextet but is also performed by chamber orchestra, unites a series of delicate, highly expressive motifs to trace the emotional depths of the text.

Cellos open the piece with a barely audible, rumbling melody. It’s passed to violas, then violins, establishing an overall sense of turbulent melancholy, perhaps illustrating the pain that the woman depicted in the poem feels. That turbulence continues building into even more chaos, ebbing and flowing between shaky and sharp melodies, pianissimo and forte dynamics. At the time of writing Verklarte Nacht, Schoenberg hadn’t yet established his dissonant serialist compositional techniques, but the piece still exhibits a knack for unexpected harmonies—chromatic scales pop out with the same ease as traditional chord resolution, for example.

But the reason that Verklarte Nacht holds a spot in my heart as one of my favorite musical interpretations of a poem can be drawn to the use of one chord that appears from a distant violin solo and static silence, when the music is at its darkest. After minutes of great turmoil and mayhem, this chord emerges with an unforgettable brightness. It’s meant to illustrate the night as it’s transfigured, ushering in a new series of sweet, airy melodies that are a far cry from the agitation we’d heard before.

To me, that moment reaches the emotional height that so much Romantic era music attempts—the sublime—with a striking simplicity. In Schoenberg’s Verklärte Nacht, poetry becomes music and music, in turn, becomes the intangible voice of what it feels like for a heart to break and to swell. In that moment, sound shows us what it’s like to regain hope when all feels as if it’s lost, ultimately capturing the essence of Dehmel’s text while needing no words at all.

Two people walk through a bare, cold grove;
The moon races along with them, they look into it.
The moon races over tall oaks,
No cloud obscures the light from the sky,
Into which the black points of the boughs reach.
A woman’s voice speaks:
I’m carrying a child, and not yours,
I walk in sin beside you.
I have committed a great offense against myself.
I no longer believed I could be happy
And yet I had a strong yearning
For something to fill my life, for the joys of
Motherhood
And for duty; so I committed an effrontery,
So, shuddering, I allowed my sex
To be embraced by a strange man,
And, on top of that, I blessed myself for it.
Now life has taken its revenge:
Now I have met you, oh, you.
She walks with a clumsy gait,
She looks up; the moon is racing along.
Her dark gaze is drowned in light.
A man’s voice speaks:
May the child you conceived
Be no burden to your soul;
Just see how brightly the universe is gleaming!
There’s a glow around everything;
You are floating with me on a cold ocean,
But a special warmth flickers
From you into me, from me into you.
It will transfigure the strange man’s child.
You will bear the child for me, as if it were mine;
You have brought the glow into me,
You have made me like a child myself.
He grasps her around her ample hips.
Their breath kisses in the breeze.
Two people walk through the lofty, bright night.

Vanessa Ague is currently a Master’s candidate studying Arts & Culture Journalism at the Craig Newmark Graduate School of Journalism at CUNY. Her writing has appeared widely including in Pitchfork, The Wire, The Quietus, Texas Monthly, and The Brooklyn Rail. She was a 2019 Bang on a Can Media Fellow and is currently based in Brooklyn.