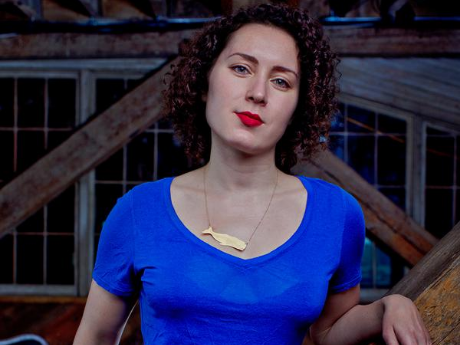 Maria Popova is a reader and a writer, and writes about what she reads on Brain Pickings, which is included in the Library of Congress permanent web archive of culturally valuable materials. She is the author of Figuring, the editor of A Velocity of Being: Letters to a Young Reader, and the creator and host of The Universe in Verse—an annual charitable celebration of science through poetry at the interdisciplinary cultural center Pioneer Works in Brooklyn.

I'm still coruscating with delight over a new picture-book biography of Keith Haring titled Drawing on Walls by the poet Matthew Burgess, illustrated by the muralist Josh Cochran. I knew very little about Haring's life, though I had encountered his art early – growing up in Bulgaria, one of the first fragments of American culture that entered our home after the fall of the Berlin Wall (on the remnants of which, I learned in this lovely book, he drew an enormous uninterrupted chain of human figures) was a tiny desk calendar featuring his drawings. It was not a joyous childhood, but the irrepressible joyousness of his figures and his primary colors reliably transported me to an elsewhere of sunlit possibility. And here I am now, living in his city, having emigrated alone at the same tender age at which he too left home. (We read biographies to locate, orient, and understand ourselves through other lives, don't we.) This poetic picture-book affirmed in biographical fact what I had long-ago intuited as a child – the uncommon largeness of heart, the buoyant courage, the defiant optimism from which Haring's art sprang, his determination to use his voice and visibility to bring justice and understanding and possibility to lives other than his own.

What is a poem or book that changed your life?

I find myself savoring again and again A Responsibility to Awe by the Canadian astronomer and poet Rebecca Elson — a member of that exceedingly rare species capable of accessing elemental truth through science and through art with equal virtuosity. Elson was twenty-nine when she was diagnosed with non-Hodgkins lymphoma, which typically afflicts people in their sixties and seventies. She lived another decade, the tender uncertainty of which she faced with and through poetry — the uncertainty we all live with at every moment, but distract ourselves from facing with busyness, with achievement, with a drink, with the hamster wheel of social media, until something — a diagnosis, a divorce, a pandemic — brings it into sharp focus. When she died, she left behind 56 scientific papers — an astonishing number for someone this young and sundry of mind — and this slender, stunning book of verse. Her poem "Antidotes to Fear of Death" has been especially mighty consolation and calibration of perspective through the trembling uncertainty of these past few months.

I am not a believer in or inflictor of universalities, but I can imagine very few people not being staggered by Maya Angelou's "A Brave and Startling Truth" — an extraordinary clarion call to humanity, which soared into the cosmos aboard the Orion spacecraft and which she dedicated to “the hope for peace, which lies, sometimes hidden, in every heart.” It is an invitation, an invocation, a rare offering of civilizational introspection and prospection, lucid yet shimmering with optimism. A conceptual masterpiece and a masterpiece on the level of language, rhythm, structure, sound. An instrument of conscience to take the edge of ahistorical surprise from the present and beckon the long-unreckoned reckoning.

It is a faint and unfortunate memory — having to memorize revolutionary verses from the end of the nineteenth century (when Bulgaria achieved its independence after five centuries of Ottoman yoke), as every schoolchild had to. The few Lewis Carroll verses tucked into Alice's Adventures of Wonderland (in translation, of course) did little reparative work (though the book itself stayed with me as a masterpiece of logic and imagination). It is incredible how much the nature of your first encounter with an art form or a subject can make or break your passion for it. (I had the opposite experience with mathematics, which might be why my adolescence was deliciously replete with theorems and devoid of poems.) But there is also a beauty to being a latecomer — especially when you arrive so late (I didn't fall in love with poetry until my late twenties) that you have no pride to corset you from exploring freely — you just assume total ignorance and relish the liberation of that, discovering unbaggaged and afresh works that have fed generations, works scorned by their contemporaries or by yours, works in which you live in the purity of word and image, unalloyed with preconception and borrowed opinion.

Pioneer Works — from the moment I first walked in as a vagrant visitor, I was awed by this improbable oasis of optimism and resistance, part Black Mountain College and part Vienna Circle, bringing art, science, and sanity together into something thoroughly unexampled, almost countercultural, welcoming all, housed in a former ironworks factory built in Whitman's lifetime. I like picturing him passing it while "Crossing Brooklyn Ferry." Pioneer Works has since come to occupy a vast territory of my heart — it is where I conceived of and host The Universe in Verse, that equally improbable annual celebration of science and the natural world through poetry, which, to my ongoing and uncomprehending astonishment, continues to draw thousands of people into this colossal spaceship of exposed brick and possibility. I cherish this place so much that I've even joined forces with the wonderful Pioneer Works team to build New York City's first-ever public observatory, which we envision as a dome of wonder to make the science and poetics of the universe free and open to all; to make, in Whitman’s words, “all spheres, grown, ungrown, small, large, suns, moons, planets” available to “all souls, all living bodies though they be ever so different.”

Since the ninth verse from Angelou's aforementioned poem might be too long for a slogan, let us go with "every atom belonging to me as good belongs to you." On the Fox ticker tape and the compose window of every social media app, on every tombstone and every maternity ward bassinet, on the bumper of every civilian car and every police car. On every bathroom mirror.