Stopping by with Krista Tippett 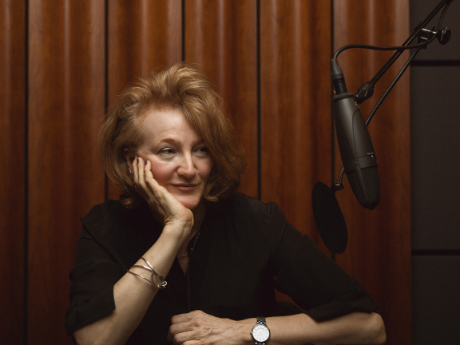 Krista Tippett is a Peabody-award winning broadcaster, National Humanities Medalist, and New York Times bestselling author. She hosts the On Being public radio show and podcast and leads The On Being Project, a non-profit media and public life initiative that pursues deep thinking and moral imagination, social courage and joy, towards the renewal of inner life, outer life, and life together. Krista grew up in a small town in Oklahoma, attended Brown University, worked as a journalist and diplomat in Cold War Berlin, and later received a Master of Divinity from Yale University. She was awarded a National Humanities Medal from President Obama. Her most recent book is Becoming Wise: An Inquiry into the Mystery and Art of Living.

A song by MIKA—an artist I didn't know before, called “Any Other World.” The refrain is, "Say goodbye to the world you thought you lived in." Songs, of course, are the most common way most people carry poetry around. It's a beautiful song with a painful origin and lyrics. But I'd also say it this way: it meets pain head on and also musters beauty. I think that's a way we are called to live forward from now.

Rilke's Letters to a Young Poet captured me in my 20s and has remained a wise companion ever since. Three things have formed me most enduringly. The notion that when we are confronted with questions we cannot really answer, we are called to hold, love, and live the questions themselves—until perhaps we come to a point that we can live our way into the answers.

Also, his clear-eyed insight that everything worth doing is hard—writing poetry, solitude, love...not in every moment but again and again. And that, strange as it may feel to us creatures who long for comfort, stretching into what is hard is vitalizing, literally life-giving.

Finally, the notion that solitude—a cultivated ability to be at home in oneself—is work we do not only for ourselves, but in service of the quality of intimacy with others in our lives.

Books and works of art that I love feel like deep friendships, personal in that way even if they’ve moved many, many others. And they come to me differently at different times in life. So it feels impossible to me to say what everyone should encounter!

I think the only poetry I was exposed to in childhood was, maybe, Robert Frost. 1960s Middle America.

I don't live in New York, but there has always been something so invigorating to me about walking down the street in New York City to its wondrous chaos of energies, languages, bodies, faces, smells, noise. I miss knowing that is there, even when I am not.

The last line of a poem called “Vocation,” by William Stafford: "Your job is to find what the world is trying to be." The language of vocation—calling—is important to me, in civilizational as well as personal terms. Through all of the extraordinary disorientation and tumult of our world right now, I think we are also glimpsing the world that wants to be born—a world in which we center what is essential in human terms—and reimagine and remake our relationship to others and to the natural world. The worst of human nature and action gets all the coverage, but it is not the whole story of our time. This line of poetry points to the calling of our time of insistently looking, seeing, hearing, and joining the generative narrative that is also unfolding.

I have thought about this on so many levels. Among them the devastating negative power of human imagination and language—how much of how we have distorted ourselves around a fiction of race for hundreds of years is a terrible testament on some level to the power of the human imagination, creativity, language, imagery. The YA writer and poet Jason Reynolds is wise, frank, and brilliant about this. The flip side of that reality, as he said in a conversation that has deeply formed me in this time: "Imagination is so powerful that it could set forth 400, 500 years of something wrong, which means that it very well could set forth 400, 500 years of something right. That’s sort of the beauty of humanity."

I have created some radio. And I am fitfully working on a book which keeps evolving as the world keeps shifting on its axes. It seems to be about what for me is the great aspiration of all of our imagining, striving, tearing down and building up—the possibility of wholeness. Becoming whole human beings, creating whole institutions and communities and societies.

Stopping by with Ayşegül Savaş