Stopping by with James Freeman 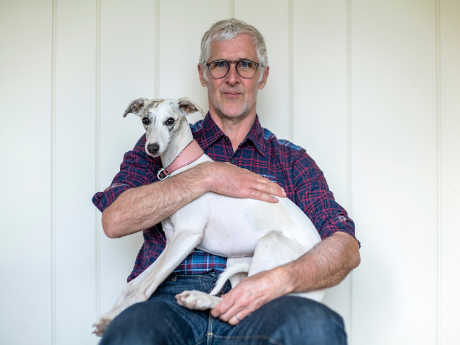 James Freeman founded Blue Bottle Coffee in the summer of 2002, after leaving his career as a freelance clarinetist. His first roastery was a 186-square-foot converted potting shed in Oakland, California. Blue Bottle Coffee, purchased by Nestle in 2017, has grown to a network of several roasteries and almost 100 cafes, spanning the United States and Asia. Named “Coffee Professional of the Year” by Imbibe Magazine and one of Fast Company magazine’s 100 most creative people in business, James is also a co-author of The Blue Bottle Craft of Coffee, published by Ten Speed Press. James lives in Ojai, California with his children Dashiell, Linden, and Monroe, and his wife Caitlin, whom he met while making coffee at the Berkeley Farmers Market.

I recently finished Vassily Grossman’s Stalingrad. It’s a huge and sprawling book with dozens of characters—the War and Peace of World War II. I kept waiting for the hundreds of vignettes to add up to something—to have a theme emerge. Unlike the end of War and Peace, there is no philosophical summary. The book ends before the battle or even the war ends. One thousand pages later (spoiler alert), the book stops, and we are left piecing together what just happened and trying to make some meaning of it for ourselves. Much like we will be doing post-Covid, I suspect.

What is a piece of art that changed your life?

During the winter of my tenth-grade year, every day after school I would shut myself in my room and listen to Stravinsky’s Octet for Winds. Usually more than once. I wasn’t yet ready for the emotional depths of Mahler or Brahms—and even less ready for the transcendence of Messiaen—but the arch humor, the emotional distance, and the casual virtuosity of the piece, and Stravinsky’s neoclassical period in general, inspired me to practice my clarinet with an increased urgency. I ended up performing the Octet in its Humboldt County (California) premiere two years later—80 years after it was composed. I pushed myself hard for the next 19 years as a clarinetist before finally giving up and launching Blue Bottle Coffee in 2002.

The older I get, the less prescriptive I become. I can want everyone in the world to hear the Vienna Philharmonic play the 4th movement of Mahler’s Second Symphony, sitting next to someone they love, in great seats at the Musikverein, but would it change the world? Did Mike Pence become a whit less dangerous after sitting through a performance of Hamilton? I’m sure he had great seats too.

My mother would read to me from A. A. Milne’s two books of children’s poems—Now We Are Six and When We Were Very Young. They belonged to my older sisters then they were passed to me. I still have them. I loved a poem called “Disobedience” and delighted in hearing about little James James Morrison Morrison Weather by George Dupree being quite in charge of his mother’s comings and goings. Although he was only three.

Before the shutdown, my brother-in-law passed away, and I went to his memorial. He was a wonderful man laid low by the inexorable grind of Parkinson’s. Somehow my sister and I got to talking about that poem and we started chanting the verses together. Verse after verse until it felt a bit like some giddy competition. She remembered more verses than I did (big sisters!) but the moment took us away from the sadness for a little bit. Maybe that’s what poetry can do.

Of course the sickness, and loss of life, and this regime’s descent into demagoguery and factlessness have been the hardest things to witness, but the dismantling of the urban virtues that have served as regular touch points of consolation for my entire adult life has been painful. I love walking a crowded narrow city street, going to the symphony, riding the Shinkansen, going to a museum, and literally all of those things are damaged but hopefully not doomed. At least I can still get to a Blue Bottle for a takeaway coffee. The virtual is certainly more hygienic than the actual, but when push comes to shove, I would like the opportunity to choose.

This is already happening. The most powerful and true three-word poem of the twenty-first century—Black Lives Matter—is being inscribed in millions of places all over this country. Including places where the current regime can’t avoid seeing it.

Have you thought differently about the role and power of language and art in the wake of murder of George Floyd, Breonna Taylor, and the widespread protests?

The power of those three words and the protests that emerge from the simple valuing of Black lives underscores their vitality and truth. To see the protests in the streets is to see the power of language harnessed to change the world.

I am working on a pair of cafes that has me feeling more inspired professionally than I have in quite some time. There’s a pleasantly transgressive quality to them which appeals to me. Working on them brings to mind a line from a Masahide poem: “The barn has burnt down. Now I can see the moon.”

Stopping by with Kim Addonizio