Stopping by with Jen Bervin 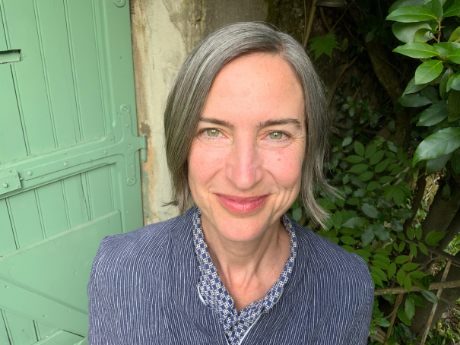 Jen Bervin is a poet and visual artist. She is the author of eleven books, including six artist book editions with Granary Books, and Silk Poems—a long-form poem presented both as a biosensor made from liquefied silk developed in collaboration with Tufts University’s Silk Lab and as a book (Nightboat Books)—a finalist for the Lambda Literary Award, and a New Museum Book of the Year. Bervin’s publication, Gorgeous Nothings: Emily Dickinson’s Envelope Poems (Christine Burgin/New Directions) with Marta Werner and Susan Howe, was a New Yorker Book of the Year. Her solo and collaborative work has been exhibited widely and can be found in more than thirty international collections. Bervin has earned numerous awards, fellowships and grants including the Banff Centre Leighton Fellowship, Foundation for Contemporary Art, Rauschenberg Residency, and Creative Capital.

The online access to programming has been such a radical shift and boon during a year in crisis. I highly recommend three phenomenally deep lecture series:

Toward Liberation: a conversation series at the Center for Book Arts in New York, curated by Jina Valentine & Heather Hart.

Don’t they all?! I am moved by the way that the artist Sonya Clark’s genius Solidarity Book Project reframes this question. It helped me to understand our bookshelves afresh, asking “what are the books that have shaped our understanding of solidarity?”

From 2016–2020, I collaborated with the filmmaker Charlotte Lagarde to create a work around this poem, titled Su Hui’s Picture of the Turning Sphere, a multi-channel video and textile installation, a “feminist listening room.” It focuses on Chinese poet Su Hui and her 4th-century reversible poem, “Xuanji tu” (Picture of the Turning Sphere). The poem can be read in many directions to yield almost 8,000 possible interpretations.

The form of the poem is stitched in five colors in a 29 x 29-character grid structured on an astronomical gauge that charts planetary movement around the North Star; the red regions of the poem refer to moveable rings of the armillary sphere. This poem was also a textile, 8 x 8 inches in size, rendered in silk in five colors in woven or embroidered brocade. The number of colors corresponds to a Chinese philosophical concept of cosmic and earthly interaction: Wuxing, or Five Element Theory. The original poem was lost; accounts and versions of the poem remain, later versions add one implied character to the empty center: xin, translated heart/mind.

We partnered with a contemporary embroidery studio in Suzhou, China, to create two new renderings of the poem using a specialized double-sided silk embroidery technique on translucent silk screens. As you enter the installation, a large video projection shows the poem being recreated by an expert in this technique in Suzhou, China. Filmed from below the embroidery frame, the projection shows the image the embroiderer does not see but is making perfectly by touch as she passes the needle through the translucent cloth from the hand above to the hand below. This exceedingly delicate, precise operation she does without knots, securing the beginning and the end of the thread within her embroidery of the written character. In a nearby vitrine, the two finished embroideries are on view.

We created a rotation of four projected videos featuring commentary from eight Chinese women: an algorithmic game theorist, calligrapher, art researcher, astrophysicist, artist, novelist, and literary scholars. The projections rotate in a square, shifting counterclockwise with each speaker. In the center of this square, the viewer embodies the poem’s center and turns slowly in the direction of the planets.

Two poets visited our public elementary school. They gave a talk in the school gymnasium (where we also ate lunch). I sat on the bleachers listening as the women recounted how the sky in a postcard could be completely replaced with another.

Cinema screenings, long days in libraries, and research in person. My sense of community has been continuous, even under tighter parameters. It was such a gift to go to San Francisco recently for the opening of my first solo show “Doing and Undoing” at Catharine Clark Gallery, and to celebrate in-person events safely, thanks to the wonders of science and vaccination.

Because of the word “inscribe,” I thought of a nanoscale form of inscription I was introduced to as an Artist-in-Residence at Northwestern University, the “nano gift.” For the text, (and only with her consent), I gravitate toward what the artist Torkwase Dyson said in conversation with the poet Dionne Brand: “I guess if I scratch away the known, and if I take away what has been oftentimes inherited, and leap into a kind of site from an insight, right—site as location, and sight as vision beyond—that kind of simultaneity, and that kind of rhythm are tuning around our behavior and our bodies, that’s, that deep synchronicity, I believe, has to come from a place of stillness and knowing.” I’m still thinking about it, but I think I’d like to inscribe a text on a meteorite.

I’ve been returning often to guidance the Canadian poet Dionne Brand: “For some us, changing the world amounts to an emergency. So here we are in the ‘weather’ as the theorist Christina Sharpe writes, here there is disaster, and possibility. And though we are constituted through and by a continued vulnerability to this overwhelming force, we are not only known to ourselves and to each other by that force, she says. And in the face of this force, as you leave here, go teach, go think, go live. Go make your work more shimmering, robust, and durable.”

I’m working on a new poetry/artist book, The Sea, similar in its writing/sewing approach to The Desert in situated poetics. Facsimile spreads from John Van Dyke’s The Opal Sea (1907) weather an accumulation of zigzag stitching sewn selectively through Van Dyke’s justified prose, partially veiling the text with silver thread to create an elemental sea, a fragmentary new book-length poem. The two enmeshed texts become what Donna Haraway calls a “contact zone.” I’m trying to create it with the kind of “thinking and care need(ed) to stay in the wake­,” to quote Christina Sharpe. Two unbound chapters from The Sea will be on view in the 17th edition of the MOMENTA Biennale de l’image, Sensing Nature, curated by Stefanie Hessler in collaboration with Camille Georgeson-Usher, Maude Johnson, and Himali Singh Soin, brings together 52 artists from 24 countries, their works are presented in 15 exhibitions in Tiohtià:ke / Mooniyang / Montreal, including an Indigenous-led outdoor garden and an augmented reality circuit in the public space. The biennale runs from September 8 to October 24, 2021.