Stopping by with Julia Bullock 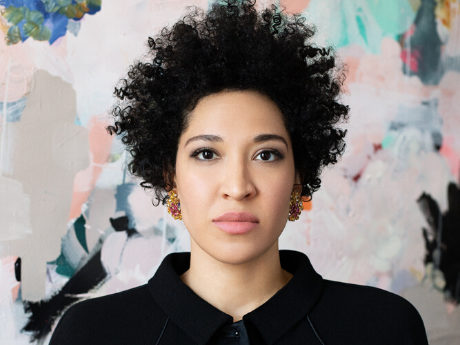 American vocalist Julia Bullock is “a musician who delights in making her own rules” (New Yorker). Combining versatile artistry with a probing intellect and commanding stage presence, she has, in her early 30s, already headlined productions and concerts at preeminent arts institutions around the world. Also an innovative curator in high demand, she holds notable positions including opera programming host of the new broadcast channel All Arts; founding core member of the American Modern Opera Company (AMOC); the 2018-19 Artist-in-Residence at New York’s Metropolitan Museum of Art; and a 2019-20 Artist-in-Residence at San Francisco Symphony. Bullock is a prominent voice of social consciousness and activism. As Vanity Fair notes, she is “young, highly successful, [and] politically engaged,” with the “ability to inject each note she sings with a sense of grace and urgency, lending her performances the feel of being both of the moment and incredibly timeless.”

Every day I’m moved by things that I’ve read and listened to—stories, testimonies, music... To quote my husband, “We are good criers...” But watching and listening to the collective movements, statements, efforts, and SPEECHES of protesters and activists are inspiring and devastating in their clarity.

Just Mercy by Bryan Stevenson (the American lawyer, social justice activist, and founder/executive director of the Equal Justice Initiative [EJI]). This book was given to my husband by Peter Sellars (a director, mentor and close friend), after he told Peter that he was studying and soon to conduct Mozart’s Jupiter Symphony. To give you a frame of reference, Peter has 50 ft ceilings—ok that might be an exaggeration—but books line every wall, and stacks rest in every corner. Peter turned around, picked up this book and said something along the lines of, “Here, read this. You don’t need a biography. Mozart’s music is about humanity... So is this.” My husband read Stevenson’s book first, and then handed it to me.

I had already begun to read articles and watch documentaries about the links between slavery, convict leasing, Jim Crow and mass incarceration, but reading this book is where I first encountered the poetry and writing of incarcerated individuals. I became deeply moved and inspired, because it got me thinking about the evolution of the slave song and what it meant in the 21st century: where would the lyrics come from and what would they sound like?

Reading this one book has been the source of generating projects and commissioning new music, such as History’s Persistent Voice, and it has fostered new relationships, like with my now friend, Ian Manuel, who is a poet, and soon to be published author.

I have just started the book, Pedagogy of the Oppressed, by Paulo Friere, and have a feeling it will have a major influence on my life and work moving forward.

My first memory of poetry was through music and my father singing spirituals, civil rights songs, or lullabies. “To make words sing is a wonderful thing, because in a song words last so long.” Langston Hughes wrote this, and when I read it several years ago, it stuck with me. Music doesn’t just make the words “last long” by lengthening the duration of the word—melodies and tunes allow words to sink in, settle, organize themselves, and resonate deeply. Words with music, at least in my life, have left a lasting impression.

I wish I could remember the first time I heard a poem being read to me and consciously being swept away, but I don’t. However, my first memories of songs, and the poetry within those songs, I remember vividly.

Although, Peter and the Wolf is certainly poetic, and that has such brilliant music to accompany the spoken story.

The concert hall. Not just because I haven’t been able to perform myself, it’s just incredible to hear and see individuals in a collective, conscious effort together. And the concert hall was a space to experience that happening in real time. I do see this happening outside though, on the streets, during protests and even during concerts held outdoors where being together is not taken for granted.

During my Metropolitan Museum Artist residency in 2018-19, I put together a program that highlighted the work and words of Langston Hughes. One of the most gratifying moments was assisting three young women on their memorized recitation of excerpts from the poems “Kids Who Die” and “Death in Yorkville” which is about a 15-year-old black youth shot and killed by a white police officer in Harlem in 1967. These young women linked that shooting to their own experiences of gun violence in their schools. And I was there to provide them with tools to communicate to those in the audience, and to those in power, what they wanted and would demand for themselves in the future.

DEATH IN YORKVILLE (first published in The Panther and the Lash, 1967)

On July 16, 1964, James Powell, a fifteen-year-old black youth, was shot in the predominantly white Upper East Side of Manhattan by a white off-duty officer who claimed that Powell was armed with a knife. The shooting caused the worst civil disturbance in Harlem since 1943. Hughes joined thousands of other mourners at the viewing for Powell, which was held in Harlem in a funeral parlor a few blocks from Hughes’ home.

From the slave chain to the lynch rope
To the bullets...

This is for the kids who die,
Black and white,
For kids will die certainly.
The old and rich will live on awhile
As always,
Eating blood and gold,
Letting kids die.

Listen, kids who die—
Maybe, now, there will be no monument for you
Except in our hearts.
Maybe your bodies’ll be lost in a swamp
Or a prison grave, or the potter’s field,
Or the rivers where you’re drowned...
But the day will come—
You are sure yourselves that it is coming—
When the marching feet of the masses
Will raise for you a living monument of love,
And joy, and laughter,
And black hands and white hands clasped as one,
And a song that reaches the sky—
The song of the life triumphant
Through the kids who die.

Differently? No... Has it reaffirmed the importance and power of language and art? Yes...

A lot of my energies are being pulled away from performing in the methods I was before, in part because of the pandemic, in part, by my choice.

I have done more “casual” things, like recording music at home with my husband, or improvising these little 10-30 second songs for people. (I now have a backlog of several little songs to release at this point...) I got in the habit a few years ago, just never shared them publicly. Now people are putting in requests for songs for their loved ones, pets, or even for themselves. It’s a delightful release.

But in general, the entire world is in a shared moment of being hyper aware of itself, and this prolonged moment of “pause” is allowing us to consider how we will better support each other, it’s allowing us to reflect upon our values, it’s also revealing and amplifying the inequities that exist.

And the arts community is having this same moment of reckoning.

I see many artists and organizations aiming to more clearly identify their values and some even looking to redefine them all together.

Which is awesome, because if, within the arts community, we can dismantle any and all inequities that have become institutionalized, and if we can demonstrate better models to work, relate and live with one another, I will have more faith about how that will resonate in other aspects of society.

It will require devotion, honesty, transparency, and resources. But that’s the work that needs to get done, and I do think and feel that is possible.

At this moment, I’m discerning how to continue to field opportunities that come to me. Even the proposals that I have made for projects in which I am driving from the ground up, I have to examine from every side to ensure that my methods of action are not perpetuating supremacist systems. But I do feel now, more than ever, that I am currently surrounding myself with people who are also discerning and challenging their own presumptions, so we will hold each other accountable.