Home > Features > Stopping By > Stopping by with Katie Peyton Hofstadter

Stopping by with Katie Peyton Hofstadter 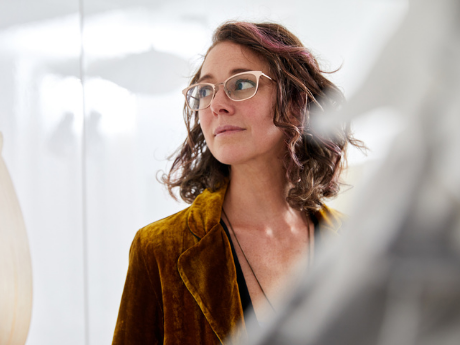 Katie Peyton Hofstadter is a Los Angeles and Brooklyn based writer, curator and artist. She is co-creator of the Climate Clock public artwork in New York, which melds art, science, technology, and grassroots organizing to get the world to #ActInTime on the climate crisis. Her essays and interviews have appeared in the Believer, BOMB, Gargoyle, Pank, and forthcoming in Flash Art. For the past decade, she has curated physical and virtual projects for Undercurrent Projects, Artsy and 1stdibs. She teaches at Parsons School of Design and lives with a dog named Peanut in a room full of books.

The Handphone Table, by Laurie Anderson. It looks like a normal table, except for two tiny indentations where you can rest your elbows. When you do so, at first nothing happens. But when you put your head in your hands, suddenly, your brain fills with sound.

It’s using your body as a conductor. The music is actually flowing through your bones, which have a similar porousness to the pine wood. I think it’s called “bone conduction.”

According to the notes, the audio includes poetry by George Herbert, from 1633: “Now I In You Without A Body Move.”

It’s such a beautiful embodiment of one thing a human body is: a conductor that passes ideas, music, poetry from one brain to another, even across historic time.

What is a poem or book that changed or greatly influenced your life?

Ursula K. LeGuin’s “The Ones Who Walk Away from Omelas.” It’s a modern allegory about a great civilization built on a horrible secret: a poor child locked in a wretched basement. It’s constructed using a classic thought experiment from Dostoyevsky that probes our problematic contract with the world. It’s about the rules of the game we play every day, about the scapegoat and refusal, and the cost of our peace of mind. This civilization seems to function so well for so many, but there is rot at its core.

How do you live with that knowledge? If you walk away, where to?

Conrad Aiken, “Summer.” I grew up in Macon, GA, and when I was young, I would go to the public library and just pull books off shelves. Aiken was considered a local author, because he was from Savannah. “Summer” was the first time I experienced poetry like an adult. Even though it wasn’t describing the experience of an eleven-year-old girl, I felt like all of my curiosity and confusion was in that poem, and it made me feel less alone. It was as if the poem knew my secret self, my anxieties and fascinations. I was hooked.

How has this last year changed you and what is something you learned that you will take with you into a post-pandemic world?

This year I was stunned by how quickly systems can change. In Dawn of the New Everything, Jaron Lanier writes about some of the early decisions in the history of the Internet. Should email cost a fraction of a cent, or be free? Should websites record information in two directions, or only one? The Internet could have evolved much differently than it did, which I hadn’t really thought about. But of course, it could.

It’s so important to remember that systems aren’t inevitable. They are designed. They can be redesigned. It's not easy or simple, but it’s possible. This year showed us all how true that is.

Greatest? That’s a hard question, but I can tell one story. A decade ago, I started a project space in a wonderful rat-infested storage basement in the East Village. The ceiling was crooked, and there were gaping holes in the drywall where you could see straight to the sweating brick foundation. One night, an important curator walked in. She could have said anything (you’re hanging art on that?), but she looked around and said, I like this. How can I help? What do you need? I was so used to this patriarchal ego-driven competition model, which still dominates the art world, where you’re fighting to exist all the time. She changed my idea of what arts citizenship means.

I would commission writers and artists to interrupt advertisements on streaming platforms. I can think of plenty of great options, but here’s an example.

“We interrupt this Spotify ad, which was already annoyingly interrupting your favorite podcast, to bring you this insight from Arundati Roy’s “The Pandemic is a Portal” :

“Coronavirus has made the mighty kneel and brought the world to a halt like nothing else could. Our minds are still racing back and forth, longing for a return to “normality”, trying to stitch our future to our past and refusing to acknowledge the rupture. But the rupture exists. And in the midst of this terrible despair, it offers us a chance to rethink the doomsday machine we have built for ourselves. Nothing could be worse than a return to normality.”

Next ad, we interrupt with Maya Angelou’s poem, "Alone." And so on.

Public artworks tell us what we value as a culture. They also set our assumptions, often without us noticing. For example, why do we have so many statues of individuals? What would more monuments of collective action look like?

With the Climate Clock, we were thinking about large public timepieces. Rather than telling us what’s already on our phones, can we get people to feel time in a different way?

Eco-anxiety is now an APA-recognized diagnosis. Part of that anxiety is knowing we’re in a crisis, but it’s not being taken as seriously as it deserves to be. Placing the first Climate Clock monument in the center of Manhattan (and now another in Glasgow, where COP26 will take place in November) sends a powerful message to governments and corporations—as well as to ourselves—that building a 100% renewable future must be a central mission of our culture.

The idea that we can only want what we can imagine. Enough with dystopias. Let’s imagine a world we want, and then really want it.

My next curatorial project explores cyborg artworks that exist in multiple realities at the same time. Enhanced magical objects that can be conjured to tell stories; wearable art with hidden layers to unlock; or digital work that triggers real-world processes, like a portrait that repairs an old church to be donated to a recovery center. I’m excited to be working with artists I’ve admired for a long time, some of whom I’ve already written about, including Claudia Hart, Carla Gannis, Morehshin Allahyari, LaJuné McMillian, LoVid, and Swoon.