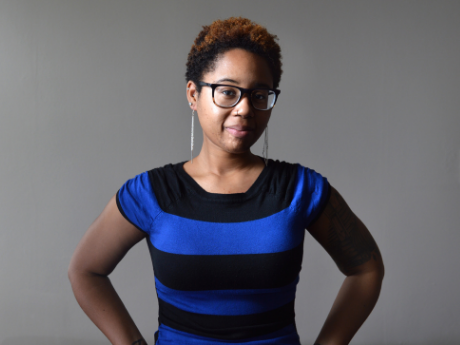 Maya Phillips is a critic-at-large for the The New York Times where she writes about theater, movies, TV, books, and nerd culture. She is the author of the poetry collection Erou (Four Way Books, 2019), which was a finalist for the PEN Open Book Award and winner of the 2019 Balcones Poetry Prize and 2020 Poetry by the Sea book award. Her second book, NERD: On Navigating Heroes, Magic, and Fandom in the 21st Century, is forthcoming in summer 2022 by Atria Books. Her poetry has appeared in American Literary Review, The Rumpus, The New Yorker and The New York Times Magazine, among others, and her arts & entertainment journalism has appeared in The New York Times, The New Yorker, Vulture, Mashable, Slate, The Week, American Theatre, and more. She is the recipient of a Hodder Grant from Princeton’s Lewis Center for the Arts.

I recently—finally—watched Birdman, which was on my list for forever. What a stunning movie, and I personally love the themes about criticism and artistry and artmaking. And I recently wrote an article about my newfound love for audio plays—I've listened to stunning works by Lucas Hnath, Melis Aker, and more. And the recent Netflix adaptation of August Wilson's Ma Rainey's Black Bottom, particularly the monologue Chadwick Boseman delivers—that was terribly moving. And one more theater-related one: last summer I watched a filmed performance of Andrew Scott in Sea Wall, and I feel like that will be forever imprinted in my brain; I watched it at least twice.

Was there something in particular was influential to you in becoming a poet and critic?

I'm not sure I can pinpoint specific works, but I can say there have been people and experiences that have influenced me. I read classic poems when I was a kid but wasn't exposed to the world of contemporary poetry until my late teens, and I have my friends and teachers to thank for that. In college I got into poetry slam, and that form of artmaking and that community was incredibly influential, as was my time in an MFA program.

With criticism, it was me just discovering as a kid, first via The Village Voice and Rolling Stone and then The New York Times, and other publications that that kind of journalism was even an option for me. And in the last couple years, it has been my relationships and interactions with other critics—A.O. Scott, Richard Brody, Emily Nussbaum, Vinson Cunningham, etc.—that have been priceless to me. I will say, though, that right before I started working for the Times, I remember quoting Alex Ross in this lovely column about criticism and taking that to heart: "[Critics] can open new worlds in the minds of readers; a passing phrase may spur a lifelong love."

Oy, what an impossible question! I suppose the safe answer would be the collected Shakespeare. When I was in college, I picked up a little box set of the complete Shakespeare from the Strand for just $10, and it's still one of my biggest treasures.

What is your first memory of poetry either as a child or as an adult?

I was seven or eight and had to write a poem for a school assignment, and I knew nothing about poetry but figured I could just write a few lines that rhymed. I remember sitting at my little plastic worktable with my mom and trying to come up with end rhymes. My school printed up a little "anthology" of poems from students in all the grades and mine was in it, and I remember my mom and grandma getting copies, and I was so excited to find out that that's what it was like to write a poem and that it was something I could do (little did I know it would get a lot more difficult!). And because of my name, I remember being exposed to Maya Angelou's work pretty early on. And I loved Poe and Shel Silverstein in elementary school.

The pandemic continues to keep many public spaces closed. What space—and community—do you miss the most?

As a theater critic, I have to say I miss all the performance spaces. I miss sitting down next to strangers and waiting for a show to start. I know museums are open, but I haven't felt comfortable enough to go back, so I desperately miss that. I rarely worked in libraries, but I miss being able to walk in and casually browse the shelves, thumbing the spines as you walk. Oh, and movie theaters. I used to love going to a weekday afternoon matinee on my own; it's a unique pleasure.

Early last year I had talked with my friend about going to the U.K., because I love London, and I'd love to see more West End shows and also check out bookstores. We wanted to do a literary vacation. And San Diego, for Comic-Con, because I'm a total nerd.

It's already been done! I love Lucille Clifton's "won't you celebrate with me"; it always feels like a little prayer. Since Covid shut down gyms, I've been going on runs in Prospect Park. I absolutely hate running, by the way. Months of going on regular runs hasn't changed that, unfortunately, but one day I noticed Clifton's words blazoned on the Prospect Park Bandshell as I ran by, and it almost felt like they gave me an extra burst of energy. Every time I run past it, it gives me joy.

We're right in the middle of a historical moment in so many senses of the term! Right now, I think witness is the central task of the artist and critic: watching and responding when the time is right. It means being vigilant and accounting for everything we've lost (the lives of those lost to Covid, the black lives lost in acts of police brutality, etc.). I believe art should always engage one's empathy and reveal humanity, and I think that's especially important right now.

During lockdown you became a critic at large for The New York Times. Can you speak about assuming that role? And are you working on anything right now that you can tell us about?

I've been having such a great time at the Times. I've got my dream job. And it's such a weird moment, but I'm grateful that I get to respond to what's happening in our culture right now and get paid to engage with and think about art. Right now I've got a bunch of movie and theater reviews slated and some other features. I also just submitted my first draft of my second book, NERD: On Navigating Heros, Magic, and Fandom in the 21st Century, to my editor a few weeks ago. And I have a hybrid poetry-criticism project in the works, along with some other poems.