Stopping by with Paola Prestini 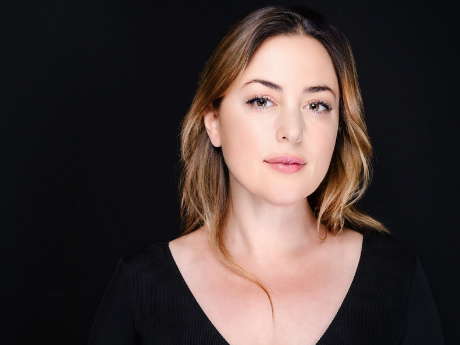 Paola Prestini has collaborated with poets, filmmakers, and scientists in large-scale multimedia works that chart her interest in extra-musical themes ranging from the cosmos to the environment. Her compositions have been commissioned by and performed at the Brooklyn Academy of Music, Brooklyn Youth Chorus, Barbican Centre, Cannes Film Festival, Carnegie Hall, The Kennedy Center, Los Angeles Philharmonic, Los Angeles Opera, Roomful of Teeth, Choir of Trinity Wall Street, and Young People’s Chorus of New York City, among others. She is the Co-Founder and Artistic Director of the Brooklyn-based arts institution and incubator, National Sawdust, and as part of her commitment to the next generation and equity, she started the Hildegard Competition for emerging female, trans, and non-binary composers and the Blueprint Fellowship for emerging composers with The Juilliard School. She was a Paul and Daisy Soros Fellow and a Sundance Fellow, and is a graduate of the Juilliard School.

The last two books I read were The Octopus Museum by Brenda Shaughnessy and Natasha Tretheway's Bellocq's Ophelia. In Shaughnessy's book she describes a world where octopi have taken over—it is apocalyptic, and gripping. My favorite poem is “Bakamonotako” which is modeled on a Japanese folk tale, and is about a little girl who believes she can best become herself by becoming unlike herself, and it's extraordinary. But there is so much in the book—about escape, and in totality it’s a work in which we understand the depths of our harm to the environment.

Tretheway's book is inspired by E.J. Bellocq (a photographer from the early 1900s), who photographed prostitutes in the red light district of New Orleans. His photos inspired Trethewey to imagine the life of Ophelia, the subject of her book inspired by one of Bellocq’s photographic muses. This work inspired a piece of mine by the same name for solo cello-which my husband Jeffrey Zeigler will play in the upcoming Death of Classical's “Crypt Series,” and which will be released on our debut album in April 2021. That is a Covid project, and each solo cello work is inspired by a different poet...and we are releasing during poetry month! My good friend Helga Davis will read the poem before the work is played. Shaughnessy is also a collaborator—we wrote a mass together. Her poem “Sisters” inspired a choral work, and her work “One Love Story, Eight Takes” is featured on my aforementioned cello album, and now we are working on Sensorium Ex, an opera at the intersection of disability and artificial intelligence. Working with living poets is one of the richest experiences of my life.

The work Labyrinth of Solitude by Octavio Paz changed my life (and inspired a violin concerto called the House of Solitude), as did Borges' work. One of my favorite short pieces of Borges is “On Exactitude of Science,” about map-territory relations—which deals with the ideas of simulacrum, memory, and permanence. All are topics I think of often in my work. I most recently read Love of Seven Dolls by Paul Gallico. There was something about the book which struck me. It's simplicity and starkness, and the complexity of the issues surrounding race, abuse, and puppetry (!) immediately struck me as something I had to write music to. So, I am going to start a new work with my long-time collaborator Julian Crouch. You can see this is a recurring motif...literature has always been the main motivator of sound for me...

I love Jonathan Safran Foer's books in general, and one of my favorite collections he edited was A Convergence Of Birds: Original Fiction and Poetry Inspired by Joseph Cornell. Foer's contribution closed the book and was inspired by the classic tale of crossing the river Styx, except he made it about a clown in Venice. It’s a gorgeous and sad tale that stuck to my heart. I then turned that into one of my favorite collaborations of all time, Aging Magician, which I did with Julian Crouch and Rinde Eckert.

I also love the The Red Book by Carl Jung. It's such a gorgeous work of art, and years ago it served as the inspiration for the main pavilion at the Venice Biennale. It stuck with me—this relationship between visuals, dreams, iconography and writing. I love trying to make sense of it. Jung integrates an attempt to understand the "human" personality in general, the relation of the living and the dead, and the psychological and historical effects of Christianity, and future religious developments in the West. I've often gravitated to works that help me understand death versus permanence, so I return to books like this often.

I fell in love at an early age with The Autobiography of Red by Anne Carson—I love that it is a novel and a poem, that it’s a love story, on fragility, love, and queerness—and I read all of Anaïs Nin's diaries, which served as such an examination of sensuality, the senses, and the soul. It's a labyrinth of writing I've been on for the past twenty years—her House of Incest served as an inspiration for a cello identity concerto, meaning a cello with multiple versions of itself.

I miss being able to be around friends easily, being able to hear music, and being able to travel! I have an international community project I've been building with Enactlab, a research-to-impact lab based in Copenhagen for my opera work Sensorium Ex, which lives at the intersection of disability and impact. Because of COVID, all is delayed...I miss them and the work we are spearheading.

“Not everything that is faced can be changed, but nothing can be changed until it is faced” by James Baldwin or, “we must build as if the sand were stone” by Borges”

Have you thought differently about the role and power of language and art in the wake of murder of George Floyd, Breonna Taylor, and the wide- spread protests?

I think the power of art, literature, and music is essential and has always been multifold, and historically it has often preceded social change. In terms of now, its role can be not just to document this moment and what has happened to and since George Floyd’s murder, but to permeate the grounding racism has in this country. That’s my hope. That somehow we do our part in eradicating systemic racism and destabilizing those with power who perpetuate it. But it’s also a great mode of self-reflection—so how does that shine light on ways we each can do better?

I have! Aside from the poetry and cello album with my husband, I’ve been creating an album, Con Alma, which unifies voices from around the world: from a female chorus in Leipzig to children singers in isolation in New York City, from a cellist in New York, to an orchestra in Mexico, and finally, to two long-time friends writing in their respective countries, Mexico and the United States, in an effort to create a shared sense of the experiences we are all going through, alone. I created the work with my friend Magos Herrera, creating a dual perspective, and a work that imagines a type of spiritual isolation, touching on nature, cycles, apocalypse, the environment, and communion, as we work toward light, solidarity, purpose and human connection. Con Alma will be released in December 2020 as an album, and as a digital sonic experience with videos accompanied by live painter Kevork Mourad. The main collaborators include an international array of superstars: Maria Popova, the voices of Sjaella (Leipzig) and the Young People’s Chorus of New York City, Mexico’s top Symphony Orchestra (Orquesta Sinfónica de Minería), and more. It will be released on National Sawdust Tracks, the genre-spanning in-house label of my company, National Sawdust, which has released Pulitzer Prize-winning operas, and collaborations with some of new music's great artists.