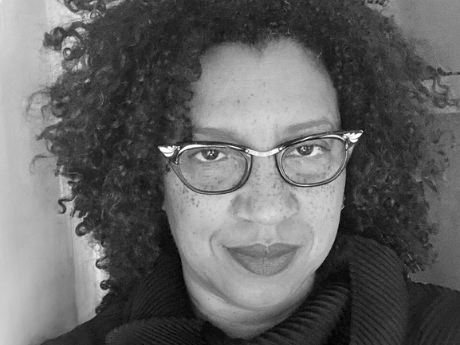 Robin Coste Lewis is the poet laureate of Los Angeles and writer-in-residence at the University of Southern California. Her poetry debut, Voyage of the Sable Venus (Knopf, 2015) was honored with the 2015 National Book Award for Poetry—the first poetry debut to do so since 1975, and the first debut to win in poetry by an African American. Lewis is a Cave Canem fellow, a fellow of the Los Angeles Institute for the Humanities, and a Ford Foundation Art of Change fellow. She received her MFA in poetry from NYU, an MTS in Sanskrit and comparative religious literature from Harvard University's Divinity School, and a PhD in poetry and visual studies from the University of Southern California. A finalist for the Rita Dove Poetry Award, the Los Angeles Times Book Prize, the Hurston/Wright Award, as well as the International War Poetry Prize, Lewis has published her work widely in various journals and anthologies, including The New Yorker, The Paris Review, and The New York Times, among others. She has taught at Wheaton College, Hunter College, Hampshire College, and the NYU Low-Residency MFA in Paris. Currently, she is a Writer-in-Residence at the University of Southern California. Born in Compton, California, her family is from New Orleans.

The hummingbirds and several new varieties of butterflies that now arrive in my backyard ever since I planted a vegetable and flower garden. It doesn’t matter what any of us think, feel or see if we can’t actually breathe the air. So, the arrival of pollinators and lizards and birds—all that—gives me hope that there will be a planet in our future, even if we aren’t here. It’s easy to look past the air, but not when we can’t breathe.

Tar Baby by Toni Morrison. I was a teenager. It was the early 80s. Literature, then—which is to say, English—had been used as a tool of profound psychological abuse and subordination (which is why so many people despise reading). Our teachers used English literature as a justification for white supremacy and our so-called inferiority. Implicit in American literary pedagogy was the idea that there weren’t any other significant literary traditions on the planet, besides the British and American ones, pre-Cold War (with a little French translated for good measure. And Homer, of course, like a hammer). At the time that I went to school, kindergarten through twelfth grade, one could have easily matriculated for over a decade of American education and not be made aware that there were writers of other languages, literary traditions millennia-old, alive in all their dynamism, all over the globe. And so, imagine, in this context, stumbling across Morrison’s Tar Baby—accidentally—when I was in eleventh grade? At that time, due to the racism of the American curriculum, I didn’t even know that Black women novelists existed. I read the book in one sitting—utterly destroyed by her genius, her unapologetic Black aesthetic—the fact that her English was so unconstrained. I was a new person when I turned that last page. Besides being a work of sublime genius, it showed me how to turn English, a tool of colonial indoctrination, into prey. I knew, then, that, with practice, I could one day make English do whatever I wanted it to do.

I don’t think there’s any one book everyone should read. It’s that kind of thinking that created the canon—cannons, too! No book is that exceptional, no work of art. We should read them all. In every language. Twice.

But I think the question is more about reading advice. Here’s a practice I followed for decades: Close your eyes, spin the globe, point. Whatever country your finger lands on, only read the literature from that country, for the entire year. And begin, exclusively, with the work written by women.

My father’s voice, playing with rhyme, delighted with meter, unironically. Just conversation, the lilt and play of human evolution in his parts of speech; the simultaneous multisensory ecstasy of all that: his smell, the sunshine, other sounds throughout our home; the voices of my brothers and sister: black idiomatic ecstasy; and my mother somewhere, smelling pretty, cursing exquisitely—long before we all became self-conscious, long before the aesthetic death-nail of assimilation. English was the tightrope upon which the beauty of our existence took place. A toy. A game. We were winning.

I don’t miss specific types of public spaces. I just miss the intimacy of anonymity—walking along next to a stranger admiring their nape. Or: overhearing a conversation, a parent speaking to a child. But what I miss most is sanity. And democracy. And dignity.

“All the unhappiness of men arises from one simple fact: that they cannot sit quietly within their own chambers.” ––Pascal

In the sky, by a skywriter.

No. This is an epoch. We’ve been fighting for centuries. Just because non-Black allies have joined us—finally—doesn’t mean anything more remarkable is taking place except for the fact that it took the rest of the world an awful long time (several centuries!) to stop ignoring our executions.

The problem with questions like this is they aren’t urgent enough. History is just staring at us. The documents are here. The witnesses are here. We are here.

That said, I am intensely proud to see all of the dynamism and courage of the younger generations—the profound courage with which they are rising to their own history. My skin just beams.

For the last few years, as poet laureate, I have been working on Poetic Truths and Reconciliation: Los Angeles, an experiment in historical redress wherein we will use poetry and international models of reconciliation to engage and in some ways, hopefully, correct the atrocities and ongoing struggles enacted upon numerous communities within the Southern Californian basin.

Stopping by with ﻿﻿Matthea Harvey

Stopping by with Ekene Ijeoma