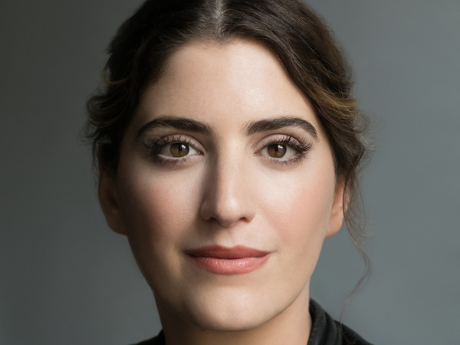 Suleika Jaouad is the author of the instant bestselling memoir, Between Two Kingdoms. She wrote the Emmy Award-winning New York Times column “Life, Interrupted” and her work has appeared in the New York Times Magazine, The Atlantic, Vogue, and on NPR, among others. A highly sought-after speaker, her mainstage TED Talk was one of the ten most popular of 2019 and has nearly four million views. She is also the creator of The Isolation Journals, a community creativity project founded during the Covid-19 pandemic to help others convert isolation into artistic solitude; over 100,000 people from around the world have joined.

When I was young, my father gave me a book of Rumi poems that were seminal for me. But the poem that often rings in my ear is Edgar Allan Poe’s “Annabel Lee.” My father had to memorize it as a high school student in Tunisia—memorizing poems was a big part of the French colonial education system—and it stuck with him. I remember him reciting it to us when I was a child and being dazzled by the strange, magical, incantatory quality of it.

I do have a more recent memory of it too. A few years ago, we traveled to Tunisia as a family, and we visited the Roman amphitheater in Dougga. We were the only ones there, and we each got up on the stage and performed a little sketch in this mini-family talent show. Under a blisteringly hot sun, encircled by those old Corinthian columns, my father ambled across the stage and recited the first stanza, and then part of the second: “But we loved with a love that was more than love— / I and my Annabel Lee—” Then he paused and said, “Et cetera, et cetera.”

At this point I’m convinced it might be the only poem he knows by heart—and maybe only the first stanza and a half.

I’m a little biased, but only a few days ago, my partner, Jon Batiste, put out a new album called We Are, and it’s magnificent. It spans so many genres, from jazz to R&B to hip hop—although Jon says genres don’t exist, only artists. This album is full of them; he worked with over 100 musicians, from the legendary New Orleanian Trombone Shorty to the classical violinist Michelle Ross, to the singer who’s better known as a writer, Zadie Smith.

Jon approached this album like a poet approaches a book of poems: listening to them in that way adds another layer of meaning, a heightened resonance. They’re a series of almost memoiristic vignettes, in which he honors his lineages—from his family to his musical heroes. I’m always astonished at how Jon can speak to the present moment and at the same time can be in conversation with the past, making sure we don’t forget where we came from and who paved our way.

For me, the role of art is connection and reverberation. The magic of being a reader is that you’re transported to a different world, a different lived experience—and yet at the same time, you can find unexpected glimpses of recognition. That paradox, of something being different and yet familiar, widens your aperture of understanding and empathy.

That widening is crucial right now. Our culture is fractured and divided; we’re all in our narrow little tracks. Right now I’m less interested in hearing people who share my same experiences and beliefs. I recently started rereading A Confederacy of Dunces—I was inspired to pick it up by a New Yorker essay about what holds up and what doesn’t. I still find it hilarious, but there are parts of it that are wretched and problematic. I love returning to some of my favorite books from when I was younger, and feeling the dissonance of what I thought about it then and what I think about it now, or seeing how something hasn’t aged well.

I like having friction with a text, because in doing so, I learn more about myself than when what I’m reading perfectly dovetails with whatever beliefs I currently hold.

Is there a book that changed your life?

Toni Morrison’s Beloved. I read it when I was about 15, and it was the first time that I remember being conscious not just of the power of story, but also the power in how a story is told. Morrison’s style is so entirely her own, and I suddenly realized that the metric by which good writing should be assessed wasn’t necessarily what I was learning in school—in terms of grammar or structure. Good writing was about voice. Good writing makes you want to write.

Reading Beloved also inspired me to dive into Morrison’s biography. I learned she was a single mom, that she worked as an editor to support her family, and that she would get up to write before dawn. At the time, I was training on the double bass, and I thought I was going to be a classical musician. I remember setting my alarm for 5:30 a.m. so I could get in a few hours before school.

And then to pull it full circle, I went to Princeton for college, partly because Toni Morrison taught there. I never got to study with her, but I did play in the opera she wrote the libretto for, Margaret Garner—which of course is the historical figure Morrison used as inspiration for Sethe.

I miss going to readings and lectures. I know a lot of these are happening virtually, and there are so many that I would love to attend. But by the time evening rolls around, I can’t sit for another hour in front of my computer. My back just refuses. I also miss my writing group. We have this amazing interdisciplinary dynamic—there’s a novelist, a memoirist, a screenwriter, an essayist, a journalist, a composer. Before the pandemic, we met once a month, usually in my living room, but of course that hasn’t happened in more than a year. We’ve tried to keep it up over Zoom, but it’s sporadic, and it’s not the same as actually meeting in person, hearing someone read their work, marking up the pages with a pen. You don’t have all the warm, spontaneous chit chat that happens when people are arriving, when they linger afterward.

A line by Miguel Cervantes: “Until death, it is all life.” I’d have it engraved above the entrance to the Holland Tunnel.

That’s so hard. To be honest, I don’t think you can top Beyoncé. She doesn’t just exceed expectations; she explodes the possibility of having expectations, and on every level, from her talents as a singer and a dancer, to the way she has approached film and really coupled visual storytelling with her music. Then there are her instincts as a businesswoman, as a fashion icon—the list goes on. She’s astonishing. She is the embodiment of excellence.

As for the person I most admire who is no longer living: the poet and my dear friend Max Ritvo. When we met, we were both in cancer treatment. He was a few years younger than me—still a college student, commuting from New Haven to New York for chemo. I adored his humor and his quirks. Some people wear quirk as an affect, but Max was delightfully weird and eccentric to the bone. He was always describing our particular sufferings in such strange, luminous language that I would write them down on scraps of paper and tuck them into my pocket for safekeeping. That he accomplished so much in so little time, that his words are with us forever—I feel so grateful, and I’m awestruck too.

Your book Between Two Kingdoms was published in February. How do you feel to have it out in the world and what are you working on now?

It feels a little like the severing of an umbilical cord—or what I imagine parents feel when their children go off to college. The book feels separate from me, and it’s having its own life now. I’m here to support it however I can, and I do feel some maternal pride about it. I’m happy it's doing well. I’ve said this a million times, but the greatest gift for me as a reader is to feel a sense of recognition in the pages, so I love it when my readers have that same experience. It goes back to the idea of connection and reverberation, when the “I” becomes a “you” and then a “we.”

To return to the kid-off-to-college metaphor, I do feel like an empty nester. I’m a little disoriented and bereft, not sure what to do with myself now that there’s no more revising, no final proofs to pore over. But I do have ideas for what’s next; two book ideas in fact. I’m looking forward to this summer, to having the time and space and quiet to gestate them.

I’m looking forward to traveling to Switzerland to visit my grandmother. She lives in a tiny village—with one bakery, one butcher, one grocer, one beauty parlor—in the top floor apartment of a seventeenth-century stone house. It’s very picturesque: the windows overlook the Lac de Neuchâtel, and there’s a medieval castle in the distance.