Home > Poems & Essays > In Their Own Words > Thomas Dooley on “St. Gertrude’s” 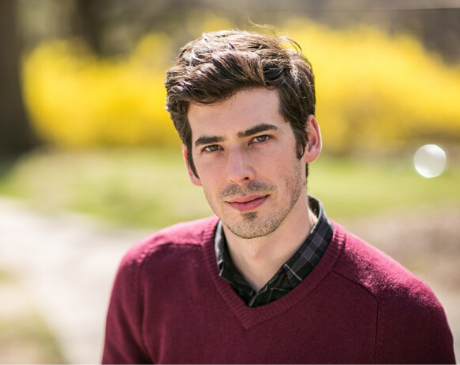 iron gates scatter low flying gulls
her brother impales an empty can
on a blunt spear-tip    twilight
blanches stones uniformly
some lindens effloresce
her brothers stumble to Pop's
grave    it has no new
bouquets    onion
grass shoots up    there's beer
on their mouths    necks
sunburned    St. Gertrude's holds
my dead family    Pop
took naps with her    liked
to lay his body on her
her brothers sledge
Pop's stone    drunken swings lop
off his name    my cousins
wipe their palms    they swing
at the iron    climb through
bent bars    the cemetery
calls my father    he will buy
a new stone for Pop
a custodian hammers back
the bars    rain hits
limestone    layers delaminate
letters lose their serifs    when
it's time we'll sink
no stone    when he
dies we'll set
my father to ash

From Trespass (Harper Perennial, 2014). All rights reserved. Reprinted with the permission of the author.

Trespass is a book of places. Many of the poems begin in simple suburban settings—a city park, a kitchen, outside a church, a cemetery—but then, by virtue of the poem, become theatres to stage the scenes of an extended family drama.

"St. Gertrude's" is set in a cemetery in a part of New Jersey that feels residential and industrial all at once, neighborhoods abutting factories. In my imagination, St. Gertrude's Cemetery is a retreat from this activity, a campus of stillness where people come to pray and talk to the dead. But as I sat down to write, instead of quietude, the setting became noisy. The seagulls from the Port of Elizabeth showed up. The traffic hummed beyond the iron gates. And as the narrative began taking shape, the aural and visual interrupters kept showing up on the page.

In mindfulness meditation, we are told to not ignore the sounds around us, but instead, fold them into our experience. That became my practice for writing the poem. I had the spine of the narrative running through, but allowed myself to pull in the scenic elements, too—the linden trees, the onion grass, the rain hitting limestone gravestones—so that the action and the setting worked together to provide a theatrical or cinematic experience.

Trespass is a personal chronicle of a family who must endure sudden fracture. For me, the form of "St. Gertrude's" speaks to that brokenness, through fragmented descriptions and clipped bits of action, the fragments of the poem appear like gravestones dotting a lawn.