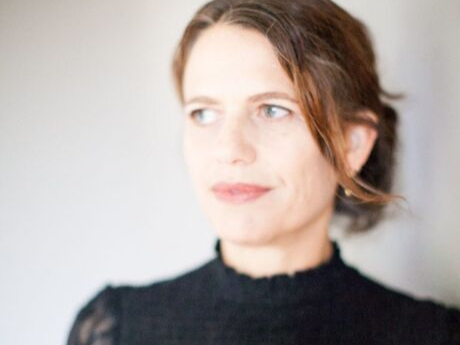 I can't remember what it is I'm supposed to be doing.
I can't think of anything but lists I've made, lists I've broken
the spirit of. It's always a fine time for breaking
things, like plastic forks and poetic trends.
It's a damn good morning to imitate the world.
But I can't remember what imitation is
or the difference between it and flattery
or an adage and an aphorism.
I'd better go back to school
he said, performing a gesture to alterity.
I can't remember if alterity
has negative connotations
or is just another way of kicking
myself out the door. I'd like to try being
a man for once. I'd like to wear chaps and have it
be obscene instead of pornographi. I can never remember
what I think of pornography when it isn't in my
face. I wish I could be inanimate,
banged-up and appreciated
for all my surface qualities
without ethics getting in the way. I seem to remember
being ethical. I seem to act along some kind of line
albeit a kinky one. I wonder when kinky became
pornographic and whether that aspect is
subtractable. I don't remember my grammar
rules. I don't think English is very good
for a certain kind of inventioning. I gather
some readers don't like being
confronted with the language in every word.
I want to be a word. I would be abstract
with an inscrutable ending.


From I Have Not Been Able to Get Through to Everyone (Turtle Point Press, 2006). Reprinted with the permission of the author. All rights reserved.

My writing begins most often in the experience of discomfort, lack of mastery, or failure, and the decision to interrogate it in language. This extends to form and approach as much as to content. My poems tend to be long and fall somewhere between poem and essay, challenging the expectations of both but also doubly exposing themselves. And I will let myself inhabit—and attempt to challenge from within—modes I find problematic but too easy to dismiss wholesale: a kind of philosophical introspection in my first book; in my second, both appropriated and invented didacticism; and in my incipient current work, optimism. Like travel to a country whose language I only partially know, these trips are educational—writing becomes a test, an experiment, complete with risks of misprision, embarrassment, trouble.

I wrote that artist's statement recently, and it still seems true enough.

And then I had the ridiculous good fortune to spend a month in a country whose language I knew not at all—Ethiopia—as a resident artist, with the assignment to compare notes with working writers and artists based there. I felt unexpectedly at home in Addis Ababa and by my last night, also the evening of my one public presentation—a poetry reading at which I was to share the bill with two well-known Ethiopian poets—I had developed such a connection to and respect for the people I'd come to know, I was apprehensive to the point of panic. I am ashamed to admit it: I was nervous that, removed from the context of American poetry, or New American poetry, or (by extension and sometimes directly) the European avant-garde tradition—not to mention a potential language barrier, though I knew most of the audience would have very good English—my poetry wouldn't do its work, wouldn't "work." Based on the discussions I had been having with writers, I was in fact fairly certain that it wouldn't be understood as poetry at all. So in a wrongheaded attempt to mitigate disaster, I did something I never do: I prefaced my reading with some comments, on form (it was a serial poem I had written in a blue examination book, with the constraints being that each line had to be a statement, and each poem had to fill a page, and the series had to fill the book); on influence (the poem stole its title and the cadence of its syntax from Wittgenstein, an important figure for me); and on subject matter (the poem sublimates logic with sex and vice versa in a vain attempt to kill the love poem once and for all, as Wittgenstein tried to topple philosophy with a single slim volume). Then I read the whole series. Before and after my reading, the Ethiopian poets presented poems in Amharic, of which I understand maybe 10 words; but they clearly had the audience riveted. Afterwards, we discussed. One of the other poets, who is a professor of literature by day, asked me this: You have all of these references to philosophy and private constraints and poetics in your work; what about the reader or listener who doesn't share these references? (Poetry in Ethiopia has a spectrum of readers, listeners.)

The discussion period was lively and unlike any I've experienced elsewhere; it included the spontaneous recitation of poetry from audience members; questions that cut straight to the bone; and a rare frankness and desire to get to the bottom of what we call cultural difference—and of poetry. But I remain haunted by that first question, because I have no desire to write poetry only for people who have read the books I have read and thought the thoughts I've thought. Or, more accurately, I have discovered other, stronger desires.

So, to begin again (a phrase borrowed from Ann Lauterbach, another important figure for me): My writing begins in the experience of discomfort, lack of mastery, or failure, and the decision to interrogate it in language.