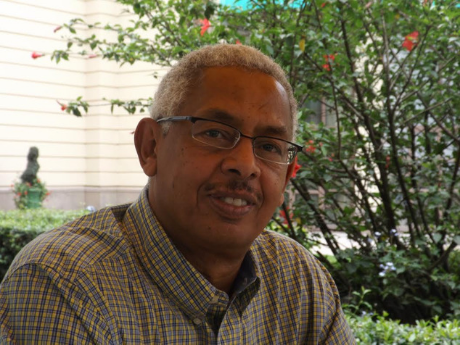 Introduction to the work of Arif Gamal
Idra Novey

When a book of poems published in the U.S. evokes an earlier era, it is usually no more than a thousand years into the past. We are a relatively young country and our sense of history tends to reflect that.

Enter Arif Gamal, born in Sudan to a Nubian family whose history along the Nile dates back to the worship of Nor. How long ago was Nor? "As long as Nubia was Nubia," one of the stunning poems in this debut explains, or about eighteen thousand years. That ancient Nubian culture is the clay of Gamal's poems, over which he sees "Islam is like a glaze." Gamal told the lines in this unprecedented book to E.G. Dubovsky, who the title page says "recorded it in verse." The book doesn't explain how closely the two of them worked to edit the poems once they were on paper, but however this sequence came into being, it is an astonishing book, at once intimate and epic.

In the opening poem, a grandmother feeds a bowl of daily milk to a snake. In a later poem, a relative swims by some crocodile. "There were one or two," the poem continues "around the watery neighborhood/and they were shy." Gamal has a spectacular ability to create an indelible scene in no more than eight or nine words delivered in the most elegant, understated tone.

His lines about complex emotion are equally spare and assured. In the poem "Responsibility," he speaks of trying to help an ill cousin whose condition keeps worsening until the cousin swallows the food his sister makes and miraculously recovers. For years after, people approach Gamal, assuming it was he, and not the sister's food, who saved the cousin. The poem ends:

what sacred key is this
of being

There is such humanity in these closing stanzas, in their honesty and questioning, and in capturing the way a community will often cling to a storyline that isn't particularly true.

Gamal brings that same masterful lyric restraint to the book's central tragedy: the displacement of the Nubians again and again for the creation of dams along the Nile. Gamal is an environmentalist and has devoted his life to fighting for "the children of all dam-affected people," as he states in the book's dedication. His knowledge of the Aswan Dam and its destruction of Nubia add depth to the poems without taking them over. Of the mass exodus from Nubia, he doesn't speak of where the migrants go or how many they were, only that "the train cars were packed with people/ all weeping where they sat." At the end of this gorgeous epic, when Gamal evokes the "high unhindered Nubian stars," I felt that physical ache that only happens with the poems that will matter to you for the rest of your life.

This is one of the most important aspect of Serra Mattu as my love for nature is unequal to anything that I know. As a young adult, going around with my uncle; Saiyyd/Said, to Kordofan, was an eye opener experience of a world that I never knew existed, an experience that affected me enormously and I think changed my view on humanity and human beings.

My uncle's job was to identify regions where water wells were to be dug or digging enormous holes in the ground that are able to retain rain water for summer days or become a source of water during drought time. I enjoyed the savanna and its forests. I also was able to appreciate the worth of water as an essential resource for all the living.

In that trip, our car got stuck in the sand. I had to walk for few miles to find help. The village I got to was a small village, where all the young left for the city either to work or study. I understood that one of my college colleagues came from that village. The fact that I saw his father and sat with him gave me an immense trust that I was in good hands and that our problem will eventually be resolved. Whatever the case was, these farmers would have risen to the occasion and resolved any passer-by call for help. They walked me to another place not far away; I later knew that those were prisoners. Prisoners with no prison or a prison with no prisoners I have never heard of let alone…seen. I do not know if this is still the case, with all the war and war machine that is raging in the region. I think I have seen the last of humanity on top of those sand dunes, in a remote village surrounded by thorny acacias, long time ago in western Sudan.

The Rash Ash Land is one poem that I cherish and one that speaks to that land, the word literally means the "land that is sprinkled". It is true, as every morning there is a soft sprinkle of rain that sprays the land before any of the farmers get to their fields.

The good people of the village helped us push the car out of the sand dunes and amidst an enormous insistence that we should stay and have a meal with them, we were able to extract ourselves, get them to their village and the prisoners to their prison and on our way to complete my uncle's mission of making sure that humans and animals find a water source during summer dry and drought. As for me, to this day I am bewildered at the generosity, kindness and tolerance of those villagers. It left a lasting effect on my mind and soul and I think it changed my outlook on life.