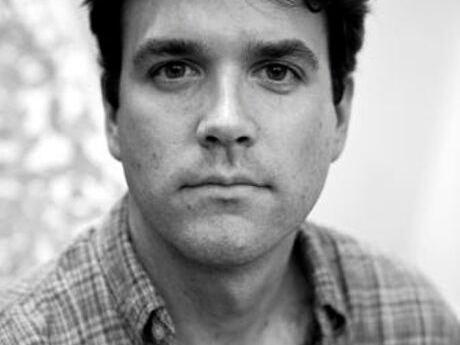 As you suggested, the beauty
of the house amazed me. It was sleeting now.
But that was okay. The trees
had already prepared for winter.

From then on I wanted advice daily.
I thought I missed the quarter-
colored sky and felt restricted
by a natural, beautiful event.
But it was semi-logical
you said. Like a mystery
I knew how to perceive.

You showed me how when
a storm comes it belongs to everyone.
And when we met, we drank
immediately. In the same sense,
you said yellow is the color of sunflowers,
sunflowers equal summer and summer
equals freedom from troubles.

Later my son said, Hey, you pain me.
My heart is a discrepancy. And I
left for your house and you said
how you wouldn't really say that.
How we draw ourselves back like strings.
My new life needs a new death.
How I keep a little of this one left.

From Star in the Eye (Fence Books, 2008). Reprinted with the permission of the author. All Rights Reserved.

Introduction to the work of James Shea
Sarah Gridley

The poet is the origin of two beings, one that projects and one that holds. From the lover he borrows emptiness, from the beloved, light. —René Char


What could it feel like to have a star in one's eye?

It could feel like a form of constant protection, a reliable ring of muscle fibers dilating or widening the pupil according to levels of incoming light.

It could feel like a burr, a prickly seed-case hooking to our vision, looking to further its own agenda.

Like a mark of distinction, a replica of grace.

Like a time-splintering asterisk, a persistent reference to omitted matter, backwards, forwards, a chronic sense that something significant is presently missing.

Maybe it is the sun itself that is missing. The star we are told not to look at directly for fear of over-saturation. Star that can start a fire where it concentrates hard enough, say through the aid of a magnifying glass. Star that will one day extinguish. Be extinguished?

There is a great river this side of Stygia…a curriculum, a vigor, a local abstraction…an unnamed flowing…the folk-lore of each of the senses…The river that flows nowhere, like the sea.

So goes the "The River of Rivers in Connecticut."

It is a poet's calling—or pastime—to get to the bottom of this. To touch the river and the riverbed. To sort light from surface, mud from shadow.

The One-Who-Fights-Shadows has a long row to hoe. A big river to fish.

[When even] The fish are sciamachists!

Is there a word for the one who battles shadows by entertaining (with) them?

By most accounts, shadow puppetry originated in China during the Han Dynasty. After the favorite concubine of the emperor died, the emperor fell into deep depression. One of the emperor's ministers had an idea: he fashioned a puppet reminiscent of the concubine, and after dark, rear-illuminated it behind a curtain. The concubine was re-animated in shadow, and the emperor was cheered.

In Star in the Eye, James Shea plays with all the (f)actors of this legend: the source of desire, her absence, the grief-stricken emperor, the resourceful minister, and most of all, the concubine revived in the form of shadow. In his relationship to words, the poet must try all the working parts, reverberate the contours of presence and absence.

From which I learned: coming and going, inside and outside, are halves of a unifying trance. Is there room on the dance floor?

We are never not expressing ourselves. As Eliot might put it, this is "the boredom, and the horror, and the glory" of being alive. Breathing itself is an expression, a "pressing out" of one's breath, and even the dead have their own rhetoric. A poem exists in this continuum, arising both as an expression and a turning inward towards the nature of expression. The difficulty and the pleasure of writing a poem lie in the way that it must surpass or match the strange and continuous expression inherent in the world. "There is poetry in everything," writes Miroslav Holub, "That / is the biggest argument / against poetry."

Some writers, like Shakespeare, seem to express themselves without revision. Others, like Merrill, allow us to feel their revisions, "the beauty of the attempt," in the words of Donald Justice. All writing aspires to express itself, trying to push against and outgrow its writer. Book Two of Don Quixote, for instance, is better than Book One because Cervantes realized that Sancho was more interesting than Don Quixote. In Anna Karenina, Tolstoy's characters change the way people do in real life: slowly and without knowing it. We spend over a hundred pages inside the mind of Mrs. Ramsay in Woolf's To the Lighthouse and in Part Two, she vanishes in a sentence.

A poet will say a thing just to hear it said aloud. ("Driving over road kill, one becomes squeamish as if one were eating it.") In this way, poetry and comedy have much in common: precision, timing, surprise, honesty. But a joke aims largely for a single response, whereas a poem's aims are expansive and mysterious. Poems are also similar to films in that they have a grammar, which unfolds in time, and they rely on silence for their shapes. Ozu said plot uses people, and to use people is to misuse them. He was referring to his films, but he might have been speaking of poetry.