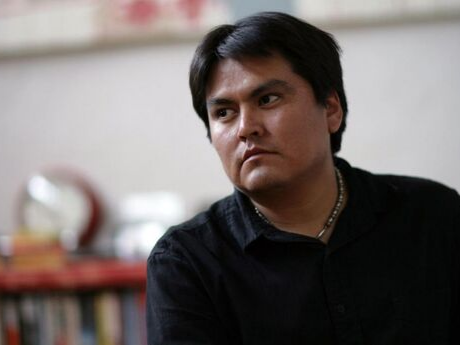 The Skyline of a Missing Tooth

The ice hook untwists inside the whirlwind like a tail.

A raven's rib ripped from the electric socket
heats the palm,
its rusted core bound by the apple's shaven hide.

Like a concussion cushioned between fingertips—
egg batter congeals in cracks of concrete.

The fourth generation of bees flee the unlocked mouth.

The stoplight blinks
midway between wing, beak and worm
unwinding inside braided corn husk,
pulsing near the foot of the interrogator
as he slams the gate shut.

The interrogator
Every atom belonging to him, says:
You there—hook and worm,
you there—carved pebbles tucked under the glacier,
your apathy grows like gray hair in these untied shoes.

The tundra's anvil and spine
are flung back into the quarried pockets of the pilgrim.

The "safe feeling" blossoms next to the caged wren.

The Milky Way backbones the nervous system of the stream the
deer sips.

This is where I broke the ice,

broke the sun's neck
and the city raised its sunflower above a pond of gathered lice.

The storm took care if it!
Reached down, hammered them flat.
Walls erected, stoned down, down
and as we fled,
we unbraided our hair from the fan belt of the exhumed engine.

One twin kissed the other in the uncovered wagon.

We watched them unravel from their neckties,
and took shape of rain clouds blotting out the noon sun.

In their houses—
the long night gloved the mist inside our gills.

And I stained the plaques clean
memorized each brick flung from the window
while roosters crowed the grip loose.

Who made them leap from shelves unnamed?
Made them buckle down low,
pulled out by their tails
from between each lie cupped inside another one?

A spear was driven into it—
Underneath the pilgrims skirt:
the skyline of a missing tooth.

I once attended a reading of Diné (Navajo) poets and writers in Window Rock, Arizona, on the Navajo Reservation. I was lucky to have been chosen as one of the readers that evening and was amazed by the energy of the stories these visionaries had to share with the audience members. One of the readers that night was Rex Lee Jim, a poet who read from his work entirely in Diné Bizaad (the Navajo Language). It was a great honor to listen to contemporary poems in my language and to feel it awaken and transform the auditorium into the spacious landscape of the high desert plateau that I grew up in. Mr. Jim read a poem that evening that I still find amazingly rich with cultural, cosmological and metaphorical significance. The poem was entitled Nahookos (big dipper) which is also a directional word meaning north, as well as a verb which can loosely be translated into meaning something which turns circularly. Ironically, the title of the poem is the whole poem! Mr. Jim just said it three times, each time with a renewed breath and extended silence. The poem enacted a totality and vision of the cosmos within my mind and body that I've longed to reach within my own work in English. At once I imagined the northern night sky, turning and turning. I was held by those words, my feet pressed firmly to the earth upon which I gained strength and at the same time I was caught within a timeless abstraction that I find hard to articulate. Perhaps I have to speak the words in Diné first before I can attain such precise language in my own poems, but that night— Mr. Jim's poem Nahookos rendered me silent before my own.