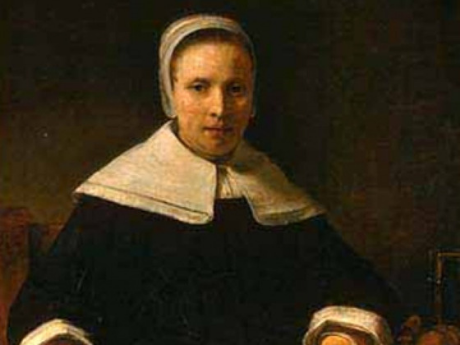 I have always been attracted to double-mindedness, to art that appears to think, rather than to assert. As a reader, I am suspended in ambivalence, in feeling strongly in multiple, conflicting directions. For the poets I admire, death is hideous and transcendent. God is enormous, terrifying, beautiful, and non-existent at once. This is to say that my favorite poems—and, I'd argue, most great poems—suggest minds at work on unsolvable problems. The joy of reading these poems isn't the discovery of a solution to our great anxieties and dilemmas, though they may provide comfort. Instead, they offer us the experience of listening in on an intricate mind greater than our own.

I first learned this from Anne Bradstreet's marvelous poem of theological anxiety and mourning, "In Memory of My Dear Grandchild Elizabeth Bradstreet, Who Deceased August, 1665, Being a Year and Half Old":

Farewell dear babe, my heart's too much content,
Farewell sweet babe, the pleasure of mine eye,
Farewell fair flower that for a space was lent,
Then ta'en away unto eternity.
Blest babe, why should I once bewail thy fate,
Or sigh thy days so soon were terminate,
Sith thou art settled in an everlasting state.

By nature trees do rot when they are grown,
And plums and apples thoroughly ripe do fall,
And corn and grass are in their season mown,
And time brings down what is both strong and tall.
But plants new set to be eradicate,
And buds new blown to have so short a date,
Is by His hand alone that guides nature and fate.

I was 25 and, at first, took it for a simple, if moving, poem about the way faith in God might guide us through times of mourning. I admired the deft rhymes, its lovely incantatory qualities. And then I turned the page.

When I returned to it a year later—to teach a course on early American literature—I noticed strange undercurrents, moments of anxiety, hesitation. Why, I wondered, does Bradstreet suggest that the grandchild is her heart's "too much" content? Is it possible to love a grandchild too much? If so, when God takes the child away, does the pain of mourning suggest fault in the mourner: an over-indulgence of earthly love? Is Bradstreet serious in her assertion that she shouldn't feel sad, as the child had only been lent to the world and, thus, her death was as simple as the repayment of a loan? And how are we to take the idea that we should not grieve for the dead, for they are "settled in an everlasting state," a position better than our own?

Because part one ended with a clear question—why do I mourn the death of a child?—it seemed odd that part two began with completely inappropriate answers: trees fall when they get old, time "brings down" the strong and tall. And, having worked through the false starts of these assertions, the picture of God Anne Bradstreet describes seemed, on second thought, chaotic and wild. He is a farmer who tears out new-set plants, an orchard keeper snipping the blooms before the fruit arrives. What kind of God is this? I wondered. And is there not a little bit of outrage—an anxiety and frustration borne of a failure to understand—mixed in with this quiet, lovely mourning?

When I'd first read the final line, I took it for a comforting conclusion. Now, the metrical hesitations, the two extra weak beats interrupting the clean iambic pentameter, suggested a speaker who feels this is the sentiment she should express, no matter how difficult, or even wrong, it seems to her.

And this struck me as a much more true expression of mourning, Bradstreet's mind asserting both what it knows—the existence of an all-powerful, all-good God—and what it feels, which is frustration, confusion, recrimination and sadness. It is a complex poem engaged with unanswerable questions about theology and mourning. It's complexity makes it not merely moving, but humane.

And having learned this from Bradstreet—having been forced to articulate this to a group of freshman students who weren't sure why they had to study her work at all—I articulated for myself something about the power of poetry in a world where our most enduring questions are not definitively answerable.