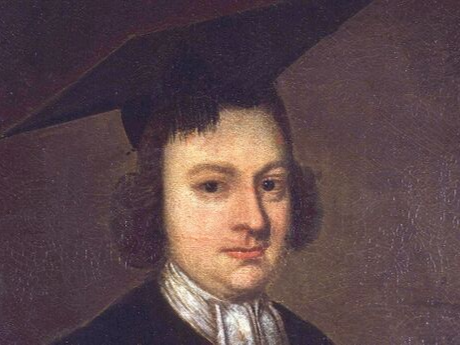 I always think of the "tesseract" in A Wrinkle in Time when I consider the power of a truly original piece of writing. The tesseract, in case you don't remember, is a kind of fifth-dimension occurrence that folds time and space, leading different times to touch the way the fabric of a skirt touches when it folds on itself. Certain poems, I often think, are tesseracts—so singular that they seem to exist in multiple times at once, transporting us outside our own interiority, our era, our personal history. A past mind comes rising off the page with all the force of a vivid neighborhood character's. One of my favorite pre-19th century poems, Christopher Smart's "For I Will Consider My Cat Jeoffry," is a tesseract like that.

The poem—a litany about the poet's cat—is really a fragment from a larger work, Smart's Jubilate Agno. Reading it you feel you recognize the mind that made it—though of course understanding that mind is a whole different thing. Smart (1722-1771) spent some of his life in an insane asylum, and parts of Jubilate Agno were written there. (Outside of that insane asylum, he was also a friend to Henry Fielding and Samuel Johnson.) "For I Will Consider…" is a strange, sweet, eccentric, reverent series of observations about the poet's cat–a catalogue characterized at once by its wisdom and its earnest naiveté. In Jeoffry's unselfconscious behaviors, Smart discerns an ongoing testimony to God's power. From its very start, the poem proves itself to have a peculiar intensity and originality, making the centuries fold together like a wrinkle in time. Encountering it one feels as one does encountering a powerful piece of outsider art.

The poem opens with the straightforward invocation, "For I will consider my Cat Jeoffry. / For he is the servant of the Living God, duly and daily serving him." But the list of examples considered are, as Smart might put it, "Exceeding strange." The result is a vision of deep spiritual gravity. There is something fascinating about a religious vision located, figuratively, in an animal mind – an animal whose interiority is utterly unavailable to us. (It's interesting to compare this piece with Keats' "Ode to a Nightingale.") In any case, you can hear the joy and urgency in these lines – so simple, yet so appealing:


For first he looks upon his forepaws to see if they are clean.
For secondly he kicks up behind to clear away there.
For thirdly he works it upon stretch with the forepaws extended.
For fourthly he sharpens his paws by wood.
For fifthly he washes himself.
For sixthly he rolls upon wash.
For seventhly he fleas himself, that he may not be interrupted upon the beat.
For eighthly he rubs himself against a post.
For ninthly he looks up for his instructions.
For tenthly he goes in quest of food.
For having considered God and himself he will consider his neighbor.
For if he meets another cat he will kiss her in kindness.
For when he takes his prey he plays with it to give it a chance.
For one mouse in seven escapes by his dallying.
For when his day's work is done his business more properly begins.
For he keeps the Lord's watch in the night against the adversary.
For he counteracts the powers of darkness by his electrical skin and glaring eyes.
For he counteracts the Devil, who is death, by brisking about the life.
For in his morning orisons he loves the sun and the sun loves him.
For he is of the tribe of Tiger.


"For I Will Consider…" has a visceral, offkilter power that knocks me over every time I encounter it. Some of the power comes from that anaphora ("For") and some of it from the accuracy of the observations (we can really see that cat) and some from the sounds ("For he can spraggle upon waggle at word of command"). The end of the poem is wonderful too, and you should read it for yourself. For me, the poem builds amazingly to that last, short, declarative line, "For he can creep." Who would have thought creeping was a godly thing, a source of human revelation? But it is. For what would a cat be if he were not capable of stealth!


For he camels his back to bear the first notion of business.
For he is good to think on, if a man would express himself neatly.
For he made a great figure in Egypt for his signal services.
For he killed the Icneumon rat, very pernicious by land.
For his ears are so acute that they sting again.
For from this proceeds the passing quickness of his attention.
For by stroking of him I have found out electricity.
For I perceived God's light about him both wax and fire.
For the electrical fire is the spiritual substance which God sends from heaven to sustain the bodies both of man and beast.
For God has blessed him in the variety of his movements.
For, though he cannot fly, he is an excellent clamberer.
For his motions upon the face of the earth are more than any other quadruped.
For he can tread to all the measures upon the music.
For he can swim for life.
For he can creep.