On Emma Lazarus’s “The New Colossus” 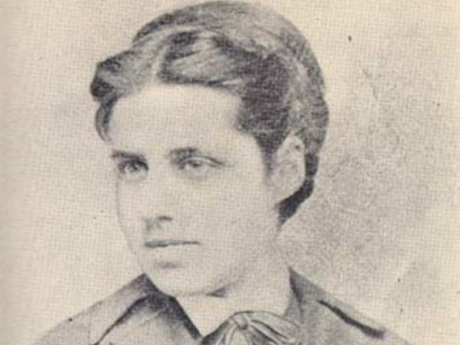 "A Mighty Woman": On Emma Lazarus's "The New Colossus"

What drew me to Emma Lazarus was not her finely wrought poems. It was not her early emergence as a poetic prodigy. Nor her friendship with Ralph Waldo Emerson. All of these facets of Lazarus intrigue me, but my interest emanated from a simple question: Can the voice of a woman, poems by a woman, speak to and for all people? Or, more simply: Can the voice of a woman be universal?

Emma Lazarus wrote a poem embraced as universal. "The New Colossus" shaped and continues to shape national identity in the United States. Emma Lazarus, poet, woman, Sephardic Jew, wrote these lines, chiseled on the Statue of Liberty: "Give me your tired, your poor / Your huddled masses yearning to breathe free." These lines now are so entangled with the large, green statue that stands on Liberty Island in the New York harbor and with the imagined identity of the United States as a welcoming home for immigrants that some people may forget these words were written, in fact, by a person—a woman, a Jew, Emma Lazarus.

"The New Colossus" is a classic Petrarchan sonnet. The octave contains two ABBA quatrains. The sestet, divided into two tercets, the first, CDC, the second, DCD, introduced two new words to the sonic landscape: "she" and "poor." Sound wraps the sonnet tightly, giving it energy. The alveolar consonants—land, stand, hand, and command—work both literally and symbolically, demonstrating Lazarus's authority as a poet, in control of the form and her speakers.

Although Lazarus enjambs many of the lines, the rhyming end words focus readers on the message that she wants them to remember. The final words in the sestet are, in their rhymed combinations, she free me and poor shore door. In the sestet, Lazarus connects the idea of a nation to womanhood, to the "mighty woman" carved by Bartholdi. For Lazarus, this "mighty woman" is the "Mother of Exiles." Representing the United States, the Mother of Exiles welcomes "wretched refugees" and nurtures "the homeless, tempest-tost" in the "golden door" of the United States. Representing the nation as a woman is a common rhetorical move, even as it is ironic. When Lazarus wrote her sonnet, women were denied many of the rights and responsibilities the nation gives to its citizens, including the vote. They could be the mothers of the nation; they could not fully participate in the nation.

This single sonnet by Lazarus situates her as an important public poet. Whitman imaged public poetry for the United States; Lazarus provided one of the poems. Her words speak to and for the nation. Of course, isn't that always the intention of poetry? To begin in the self and speak beyond it to a larger audience? Certainly, but that larger audience has not always been able to hear diverse voices. During the twentieth century, larger audience often rested more easily with the voices of Frost, Sandburg, Longfellow, Poe, Stevens.

Today, more diverse voices speak to the nation. Kay Ryan served as Poet Laureate from 2008 until 2010; during that time she publicly mourned the death of her long-term partner, Carol Adair. Mary Oliver is one of the best-selling poets and most beloved poets in the United States; she, too, is a lesbian, who recently has written about losing her long-time partner, Molly Malone Cook. Recently, Richard Blanco served as inaugural poet, a gay Cuban speaking to the hopes and dreams of the nation as President Obama begins his second term in office. Who is speaking, who is listening, and who is able to be heard is changing in the United States.

Who is speaking? and what voices are heard as universal? are obsessive questions that I bring to my reading of poems and of poets. They drew me to Emma Lazarus. That and the fact that I always am trying to construct a genealogy for myself. By reading, I create an imagined history of and conversation with Jewish, lesbian poets. I imagine myself huddled with mighty women, sharing words, obsessions, conversations, and coffee.

Emma Lazarus died at the age of thirty-eight; she never married. Being an adult woman and unwed in the nineteenth century is sometimes a clue of a queer passion for other women. A sign. Indeed, according to Esther Schor's biography of Lazarus, she was fascinated by prominent women in same-sex partnerships in her social and political circles; she corresponded with them and, when possible, met them. Lazarus also had some of her own same-sex attractions and possibly same-sex intimacies. Was she a lesbian? Impossible to say. How people organized their intimate and erotic lives in the nineteenth century is different from how we do today. Still, I relish the possibility that the woman who shaped the meaning of nation for the United States in the twentieth century was all of these things—woman, Jew, and lesbian.

Lazarus is a part of the poetic lineage that I construct for myself, reaching back through poems to Marilyn Hacker to Joan Larkin to Robin Becker to Enid Dame to Adrienne Rich to Muriel Rukeyser to Gertrude Stein to Amy Lowell to Amy Levy to Emma Lazarus. All "mighty women" deserving of more "world-wide welcome." To them, "I lift my lamp beside the golden door!"