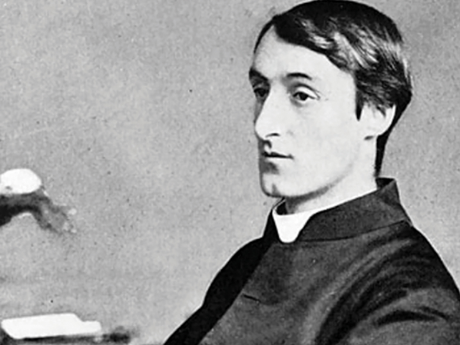 In our particular, peculiar time, is the end of the world ever not in the surround? We hear increasingly of the fierce consequences our environmental damage has done to the planet, the storms, wars, starvations and financial challenges that seem unlikely to abate. Moreover, this anxiety is readily capitalized into Hollywood mainstream fare. My Flixster app shows at the moment seven end of the world feature films, ranging in tone from horror to suspense to parody. What failures and ambivalences, what catharses gone pabulum, fill us in the moment after the credits crawl up the screen and we leave the darkness for our parked cars to drive home?

Home--that which holds us, surrounds--unravels with great violence as Hopkins' apocalyptic poem spills forth. It unwinds with all that language, torqued with deeply felt emotional extremity, can conjure. Though muscled and mannered, Hopkins' style is never a pose or an embellishment. His verbal proliferations, his alliterative and hyphenated excesses, bespeak the seizures in the sound that the final day of wreck and reckoning, once fully imagined, demands. Still, many of Hopkins' linguistic idiosyncrasies stem not from the chaos of the future, but from his reaching back in time to one of England's bygone literary era, the insistent medial caesuras and alliterations of accentual verse.

I love Hopkins for being one of the great worshippers of nature's particularity. Its "stained veined variety," if one pays attention, can enclose the human being, cathedral-like, in right relation to his God. Because of this commitment, his talents matured toward the richly sensual, the body as spirit made manifest and best expressed through his remarkable ear, eye, and sense of touch. As this poem's first half considers the end of enclosures, the vault, the womb, the evening sky over bent, there is no poet who could suffer the prospect of sensory uniqueness at an end more personally. Drawn into the sibyl's stutter work of prophecy—prophecy rarely submits to the normalcy of rule suggested by ordinary syntax—Hopkins' permutations, our sense of each word arising in broken pieces from its previous utterance, mounts its accumulations. Then, as tradition offers, there is a turn after the eighth line toward decrescendo, a descent into the rigid strictures of binary thought, "black, white; | right, wrong;…"Now the enclosures give way until only single syllable words pile up, enacting (rather than merely representing) the madness of a self writhing upon only itself, in utter isolation, stripped of the outer world.

Many of the contemporary poems I come across evoke the tones of either the elegiac or ironic, the beautiful or the good joke. And yet is not terror one of the central concerns of our era? I speak less of the terror the "enemy" and more directly here about terror as a collective and personal feeling. The cue from this Hopkins piece might be one of bringing poetic urgency back, a wildness that could expand art's tonal range into a more fully human one that includes fear and panic within the deeper bodily sensations of our language.