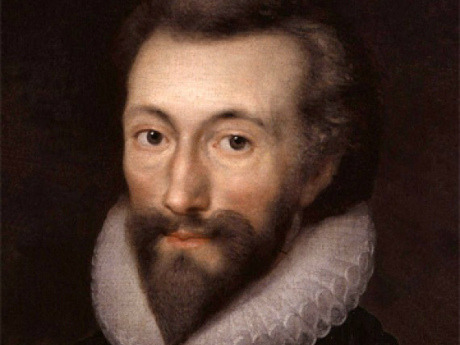 When a friend asked me the other day, Who was the poet you first fell in love with? I had to pause a moment. Poetry meant very little to me when I was young. I loved getting lost in novels; I learned how to think by reading and acting in plays. And thinking, especially when tethered to feeling, was fun. But poems weren't yet alive for me; I didn't know what to do with them. Until, that is, I encountered the poems of John Donne.

I must have been sixteen or so, and suddenly the poem on the page was a delicious adventure. Donne's language was electric; his syntax was a high wire act; his metaphors were intricate and wild and stretched to outrageousness; his athleticism—and alas for me, his very preening and misogyny—were sexy.

Ben Jonson once predicted that Donne's poetry would perish for want "being understood." But I think his poems are brilliant recruiting devices for uncertain or inexpert readers like myself at sixteen. I was not equipped for understatement; I had to be seized by the shoulders and shaken. The very strenuousness of Donne's conceits —those wonderfully far-fetched analogies that defy both visualization and ordinary logic—is flattering to a reader: Donne's metaphors put us through our paces, as a well-built puzzle puts us through our paces. Other poets had amused me or touched my heart a bit or afforded some musical pleasure, but here was a poet who gave me honest work to do: for the first time, I felt how thrilling it was to be included. Best of all, the poems that captured my attention with their dazzle and extravagance are by no means for beginners only: their exhilarating breadth of reference—cosmology, cartography, contemporary politics, law, logic, physiology, to name just a few—is anchored by real urgency of mind and spirit. Poetry is a form of bravura for Donne, a way of conjuring presence-in-the-world. But it is also a form of soul-making, a way of conjuring presence-before-God.

Impossible to recall exactly, but it must have been the love poems that first captured my attention: "The Sun Rising," "The Flea," "The Canonization," "The Relic," all of them so frequently anthologized. I still teach them and delight in their mobility. Tonally, they run the gamut from cynicism to near-idolatrous adoration and back, often in a single poem:

When my grave is broke up again
Some second guest to entertain
(For graves have learned that womanhead:
To be to more then one a bed),
and he that digs it spies
A bracelet of bright hair about the bone,
Will he not let's alone,
And think that there a loving couple lies,
Which thought that this device might be some way
To make their souls at the last, busy day,
Meet at this grave, and make a little stay?


Musically, the love lyrics move from ease ("Dear love, for nothing less than thee / Would I have broke this happy dream" ["The Dream"] ) to yet more elegant ease:

Go and catch a falling star;
Get with child a mandrake root;
Tell me where all past years are,
Or who cleft the Devil's foot;
Teach me to hear mermaids singing,
Or to keep off envy's stinging;
And find
What wind
Serves t'advance an honest mind.


Rhetorically, the love poems are a veritable kama sutra , so many and so adventurous are their positions. There's expostulation: "For God's sake hold your tongue, and let me love!" ("The Canonization"). There's petition: "Send home my long-strayed eyes to me, / Which, oh, too long have dwelt on thee" ("The Message"). There's casuistry aplenty (Donne's lovers love to be admired for their technique, and nothing flaunts it like a conspicuous display of specious logic):


Mark but this flea, and mark in this
How little that which thou deny'st me is:
Me it sucked first, and now sucks thee,
And in this flea our two bloods mingled be.


But the poems that hold me longest, compelling me to return to them again and again, are the religious poems. In these the stakes are unfailingly high, at once intensely personal and intensely part of the social and historical sphere. In these, prosodic and figurative and argumentative ingenuity ring changes on, and dangerously challenge, centuries of metaphysical and ethical speculation. In these Donne's genius partakes of something much larger than individual consciousness: his originality is radical precisely because its vocabularies belong to a highly-wrought inherited scheme.


I am a little world made cunningly
Of elements and an angelic sprite,
But black sin hath betrayed to endless night
My world's both parts, and, oh, both parts must die.

The figures with which this poem begins are what, in the strict sense, we call "received." The microcosm/macrocosm analogy is ancient. The story of sin, and the consequent double death of body and soul, was one that Donne, and every human being in his culture, had been told from infancy. The crisis of discovery when the universal becomes personal —that metrically necessary and at the same time shatteringly disruptive "oh"—was a moment Donne's religion insisted was necessary to salvation. It was also, that discovery, emotionally intolerable:


If pos'nous minerals, and if that tree
Whose fruit threw death on else immortal us,
If lecherous goats, if serpents envious
Cannot be damned, alas, why should I be?


Such a poem can only be written in a culture in which everyone knows, and instantly, which tree the poet is talking about. That tree.

How to explain why the very syntax and lineation of this quatrain are so thrilling to me? The sentence is a series of masterful suspensions: four starts ("if") to what itself can only be a dependent clause; within that clause another ("whose fruit . . . etc.") of considerable convolution; and all that apparatus mere prelude to a negative proposition ("cannot be damned"). Syntactical inversions ("serpents envious"), including the one that's a killer ("else immortal us"). Enjambments (lines one and three) that are gentle structurally but ominous semantically. And a disruptive expostulation ("alas") before (at last) we make the turn into the main clause. Which clause is itself no affirmation but an interrogative of despairing protest. The elements are utterly simple, even banal: tree, fruit, serpent, a perfect iambic pentameter, a question of the sort a child might ask of a disapproving parent. But their import is as weighty as human mind can conceive: damnation. The convolutions of line two manifest a radical narrative compression (the entire story of the Fall in ten short syllables) and also a desperate effort to reconfigure blame (the fruit is made the active agent of that Fall, at least grammatically, and the very implausibility of the verb—"threw"— underscores the desperation). The mounting tensions between simplicity and unthinkable consequence betray the tumult in the speaker's mind.

I can inventory and admire the stanza's minutest means of putting-itself-together, in other words, but I cannot exhaust or fully account for its stirring effect on the heart. The song-like suspension of "tree" and the ghastly abyss of "else immortal us" exceed all explanation.

They also, I would argue, exceed the hold of the theology to which they once belonged. We no longer believe in Homer's gods, but we can be moved by the fate of Hector. We no longer, many of us, believe in the Christian dispensation, but a poet of Donne's intensity can make us feel something of what it would be like to inhabit so paradoxical a faith.

Paradox is a prominent feature of the poetry we call metaphysical. This is not a question of surface alone. It is not, in the ordinary sense of the term, a "chosen" method. The very world Donne inhabited, at every stage of his shifting confessional allegiance, was built upon paradoxical foundations. An all-knowing, all-powerful, and perfectly good God sets his creatures in a garden in order to watch them fall, and punishes them for falling. A new covenant of grace supplants the old covenant of law by means of human sacrifice, which the old, supposedly sterner law has long rejected. The man/god dies for "all," yet "most" still fear damnation at the Last Judgment:


At the round Earth's imagined corners, blow
Your trumpets, angels! and arise, arise
From death, you numberless infinities
Of souls, and to your scattered bodies go!


The Book of Revelations tells Donne that the Apocalypse will be announced by trumpeting angels at the four corners of the world. But the new cosmology has told him that the world is round. How to turn into a source of energy what would otherwise be intolerable contradiction? The earth is round; the instruments that tell us so, including and preeminently the human mind, are manifestations of the same deity that inspired Scripture. The earth's "corners" are the figures of imagination or, in the language of theology, of "accommodation," the willingness of an otherwise incomprehensible God to lend himself to the scale of human thought. Yet those imagined corners are sturdy enough to support the very angels of the Apocalypse, whose arrival will be all too real.


All whom the Flood did and fire shall o'erthrow,
All whom war, dearth, age, agues, tyrannies,
Despair, law, chance hath slain, and you whose eyes
Shall behold God, and never taste death's woe.


Imperative mood, violent enjambments, spondaic monosyllables, world-ending summons cantilevered over an abyss by the sheer force of imagination: this is poiesis in the strong sense. And it takes the original Maker as its model: "My God, my God," writes Donne in his Devotions, "Thou art a . . . literall God . . . But thou art also . . a metaphoricall God . . . A God in whose words there is such a height of figures, such voyages, such peregrinations to fetch remote and precious metaphors, such extentions, such spreadings, such Curtaines of Allegories, such third Heavens of Hyperboles . . . ." As one might seek to escape for once and for all a fear of heights by throwing oneself over a cliff, Donne's speaker has sought to escape metaphysical terror by hailing down the terrible end. And he has used his god's own methods to do so.

And then the turn:


But let them sleep Lord, and me mourn a space,
For if above all these my sins abound,
'Tis late to ask abundance of thy grace
When we are there: here on this lowly ground
Teach me how to repent, for that's as good
As if thou'dst sealed my pardon with thy blood.


Humble petition is quite at odds with the hortatory imperative, but grammatically speaking, in English, the "moods" are indistinguishable: another of the poet's paradoxes. The verse has gone quiet: less fire, less flash, a more obedient end-paused line. Until the final turn of the screw: "as good (comparative) / As if (proposition contrary to fact)." According to every orthodoxy Donne knew, the Lord to whom he speaks had sealed his pardon with His blood: "as if" is all but blasphemous. It also, with uncanny precision, fits the paradox of poetic speech to the constitutive paradox of grace and assurance in the very odd religion that formed the horizon of comprehensibility in John Donne's world.

So, to answer my friend's question: Donne, John Donne. And still.