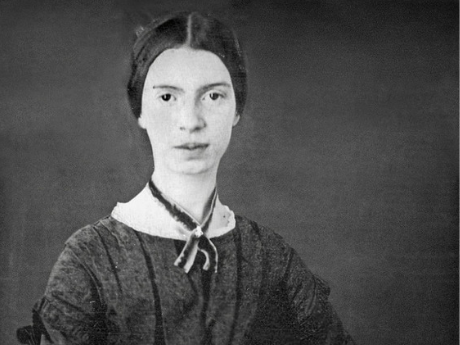 I don't know how old I was when I first saw a poem of Emily Dickinson's; I was in a classroom. I learned that her punctuation had been altered and then restored. I also learned that she wore white and was in love with god.
The first of her poems to enter my soul was Wild Nights. I was a cynical and disabused girl, and I probably put my hand on my hip when I said to myself, no way, man. It was around this time that everyone was punctuating every phrase with the word "man."

Wild Nights—Wild Nights!
Were I with thee
Wild Nights should be
Our luxury! 249

Nothing could have been closer to my own longing for love. Wild nights, I can still whisper it to myself and remember being a young woman alone, craving love.
And then I couldn't read her, or I dipped in and out, over the years. Reading her was overwhelming.
I dipped in and out, I read the books about her as they emerged, each more fascinating than the last.
I've thought about what Mabel said and Austin did and Susan didn't say, and who came across the lawn and who didn't, and what some have said, on the basis of the poems, about the meaning of her life.

Reading, I say to myself, this "thee" is capitalized," this "thou" is not—meaning this poem was for a man, this one was for god.[1]
I notice that capitalization, for Emily, has nothing to do with godliness; it is her own mysterious, uncodifiable science of emphasis.

What we know is that Emily turned inward, toward herself, selecting her own society. But who was the god she loved, then?

Exhilaration—is within—
There can be no Outer Wine
So royally intoxicate
As that diviner Brand. 383

So, exhilaration is the divinity, within. The diviner brand is within.
....
To stimulate a Man
Who hath the Ample Rhine
Within his closet— 383

What is she telling me? The divine Wine is within, and you must have that divine wine within in order to... stimulate a Man who has his own Rhine.
The Ample Rhine—the river and the wine. Rhine wine had reached elegant Amherst from faraway Germany.

Or no, I've misunderstood.
'Tis not of Holiday // To stimulate a Man / Who hath the Ample Rhine.
So it's something else: my own divine, exhilarating wine is for me to drink, not for festively stimulating a man.

Emily was in a terrible struggle. The light itself—the certain slant—hurt her. She waded whole pools of grief. She was stricken by anguish and didn't say why, maybe she didn't know.
Her poems use elements of the real, of course: the compass, the chart, the river, the wine. But the details of the life story are not there: she does not tell us what has happened to her in her life that produced this state of being or these poems. I am not saying that I want her to have told me. I am only saying that she has not told me; she does not say, first this happened, then this happened, and this is why I feel as I do.

The poem begins, 'Tis Opposites—entice—. In the last stanza, she gives this pair of opposites: the one who lacks love is enticed by it.
Tho' the divinity may be Me?
I, Emily, may be the divinity.
Does she long for divine love, while paradoxically being the divinity herself? She longs for love.

She seems to use the notion of the divine also metaphorically, the same way that she used objects: the chart, the compass, the wine, as an invocation to feeling. Passion, exhilaration.

I'm a Debauchee of Dew—, she says, an Inebriate of Air—. (Not all the vats upon the Rhine / Yield such an Alcohol!) 214 But how, I ask, was Dew strong enough to debauch away the pain of her longing and separateness?
Were I with thee. I might be but I am not.

Wild Nights should be
Our luxury!

Luxury: Baudelaire invoked it too: "luxe, calme et volupté." He was thinking of calm sensuality, she was thinking of wild union. I take the word "luxury" to mean riches, comfort, but the dictionary confirms my intuition that "luxury" has also meant "lust."
In French, luxe is "luxury," and luxure is "lust."[2]
Baudelaire too was asking his beloved to travel with him. Emily wanted a wild sea and a port to moor in; Baudelaire wanted his voluptuous calm.

Do we often remember that Miss Dickinson and M. Baudelaire were writing at the same time? No, she didn't meet him, even on the page. They lived nearly the same span of years.

The next year Emily writes: I cannot live with You— / It would be Life—. 640
Reading this carelessly, I imagined that she preferred her own life to someone else's: she wanted to be alone.
But then one day I read to the end of the meditation, and in the last stanza, there was this: So We must meet apart— / You there—I—here—.... And that White Sustenance—Despair—. And now I know that what she meant was, living with you would be Life. In other words, I would have Life if I could live with you.
Were I with thee.

I wonder why she is remembered for dressing in white, when she might have been remembered for living in anguish, with the sherry in her eyes and only the Dew to drink.
She was not only separated from the beloved, but she was her own enemy:

But since Myself—assault Me—
How have I peace
Except by subjugating
Consciousness? 642

She would banish herself from herself if she had the Art to do it. And why? Despite all her artistry, her fortress is impregnable to Heart. I notice the counterpoint of art and heart; but here the life art is lacking, not the poet's. She is the impregnable Fortress assaulting herself.
How devastating this is.

And now I notice that the word "Heart" appears in Wild Nights too:

Futile—the Winds—
To a Heart in port—

Her only peace, she says, is in subjugating consciousness. A prescient pre-freudianism. I know what she means: not thinking, knowing or remembering. So she sublimates, using metaphor.

Rowing in Eden—
Ah, the Sea!
Might I but moor—Tonight—
In Thee!

She seems to want those wild winds, but she also wants to moor in "thee." Isn't this love? Human love: the lovely wildness one can feel while moored in the beloved. But she also says that winds cannot touch the Heart that is in port. This odd paradox leaves me at sea, as so often when reading Emily.

What she did not have was a port for her Heart.
I want to say one last thing. Wearing white—the maiden, the nun. What is her white? That White Sustenance—Despair. It might also be the color of her despair. Even more terrible is the thought that for her, despair was sustenance. What is sustenance? It is what keeps us alive.
I too lived for many years in a state of pained separation, while also living socially. Emily wrote and received letters, she gave poems and posies, she had a woman taking care of the house, she saw and knew the children. She never stopped living in a social world. I feel for her as I do for my younger self. Beyond the elaborate discussion of her allusions and meanings and metaphors, there's the reality of a woman who stayed alone, longing for love, because of some unnameable pain.
I have notions about what it might have been, but there's little to go on.

And yet, there is 'no art without change of heart.'[3] I'm comforted to think that in her later years she may have loved and been loved, that luxury.

[1] I hear Emily's "thee" and "thou" as the (by then archaic) familiar second person--this may owe to my Quaker start in life. Or perhaps she is moving between formal and familiar, sometimes speaking grandly to a divinity, sometimes whispering to a wished-for beloved.

[3] I've said these words to myself for years, invoking Yeats. But now, checking, I can't find the quote. They may be my own transmutation of his "only an aching heart / achieves a changeless work of art."