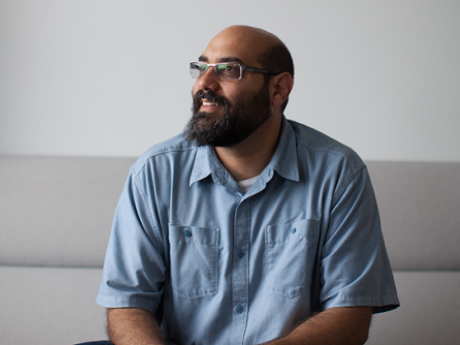 In what ways might you consider yourself an American poet? and/or What role do historical and geographical factors play in American poetry and in your work specifically? What other aspects of your life (for instance: gender, sexual preference, class, ethnicity, religious beliefs) relate to your sense of being a poet in America?

I am an American poet by way of geography, language, and influence. Whether we consciously conceive of it this way or not, each of us writing in this country and in the American English language is working out of, changing, and reshaping a notion of American poetics. What excites me most about this is the amount of fluidity that exists under that moniker. Each generation, each wave of immigration, each geographical resettlement, helps push the boundaries of American poetics further, so that here, in the 21st century, there is an increasingly less monolithic poetic of the United States, there is no single language or single aesthetic, no insular way that can define it for all. Certainly for myself, something entirely "un-American" also informs my work. I come from a place that is decidedly not American, not in geography, language or culture and was raised with its antecedents. That cultural rootedness carries itself into my work. It informs every element of my writing–the music, the line, the context, but so does the place and time wherein the work is being created, debated, and defined. Neither can be severed from the other. This history of mine serves as a kind of translation, a new color applied to an existing piece of glass, each layer redefining the light that enters through it. These two realities overlay constantly to inform one another so that in the most seamless moments they become something fresh, something not entirely defined by either tradition, something purely diasporic or transnational in nature. One opens the door into the other's reality, and what emerges is a new aesthetic, a new praxis that cannot be defined by any single tradition or rubric. The increasingly unidentifiable and transnational nature of American poetry is perhaps the most compelling part of it. It is what makes a 21st century poetic a real possibility. It is what gives us as contemporary writers a feeling that we can use existing seeds to cultivate a new crop. It is this variant of American poetics that makes it all worthwhile, the knowledge that each day can be spent in the company of poetry, and each day can be a reinvention of the world, unlike the day before.