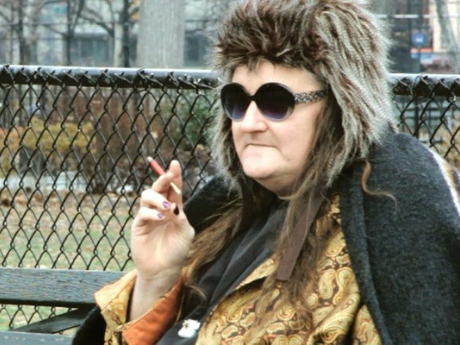 Thank you for this question, I like it. There's always so much talk about politics and poetry, and a politics of poetry, and the overt political in poetry, etc., etc. I prefer to answer you by saying that I am an American citizen. I pay my taxes. I pay my taxes because I am a coward who is afraid of prison. My taxes – like ALL Americans who pay their taxes – purchase bullets and bombs that are used to wage racist wars in the Middle East. To not value a complete understanding of JUST HOW complicit each of us writing poems in America today are is to have zero value in life. At least an admission of guilt is something. I am ashamed of my country's wars. I am not ashamed of the many beautiful people here who – like me – very much want peace.

If you write about politics frequently, what issues, difficulties,advantages and disadvantages do you negotiate? Which poets do you draw on when conducting such negotiations?

Thank you for this question, I like this one very much. I have an essay in the new anthology WHY ARE FAGGOTS SO AFRAID OF FAGGOTS (AK Press, 2012), edited by the inimitable Mattilda Bernstein Sycamore. In my essay one of the things I talk about is my anger at the lesbian and gay community wholeheartedly supporting the racist wars in Iraq and Afghanistan via demanding an inclusive, if not more politically correct American military. A politically correct military makes decisions to go to war much easier in the end for our leaders.

Back to my arguments as a gay man who opposes the military. Whenever I have this debate someone always likes to say that I'm not valuing working class gay and lesbians who want to use the GI bill for college. And I say to that that if you're so interested in working class lesbians and gays going to college then send them to college please. Please send them to college. Start a fund. BUT DO NOT ASK them to risk their lives and the lives of others FOR COLLEGE! It's absurd! Asking working class people – gay or straight – to risk their lives for college is upholding centuries of oppression against the poor. No one is asking rich kids to carry a gun in order to take Comp 101 for crying out loud! There's a madness to these arguments defending a military which is ripping a whole in the heart of our world as we speak.

Whenever I hear a conversation about how much the wars are costing us I obnoxiously say as loud as I can, "THEY ARE COSTING US EVERYTHING!" Of course the conversation is centered around the monetary, but I want to ALWAYS make the point that our very souls are at stake right now. We're suffering inside this vicious cesspool of a nation, suffering together, and suffering so much we can't recognize the suffering at times. Our pain is always there. I could vomit of it.

Dear Horace, the big dialogue eludes you and your colleagues, because the big dialogue is about keeping the world safe, whether through art or politics. Or the art of politics, or the politics of art, as it is. Shame on you Mr. Engdahl and your colleagues for granting such an award to a president who is now a war president. The ONLY way to redeem the Nobel committee is to ask for president Obama's award back. If you won't do that, then please shut up.

Poetry is so large that I cannot imagine there not being room for someone, no matter who they are. As the genius American poet Alice Notley has pointed out, "Poetry's so common hardly anyone can find it." Poetry belongs to everyone. Poetry is our poetry, it belongs to us, all of us.

I could repeat my answer for question five here. I'm feeling like this question is asking, "How much judgment will I espouse against another?" We need a more egalitarian structure, now more than ever. The stakes have never been higher. THE VERY FACT that one would take the risk to be creative in this mechanistic world is a fact we must uphold and love with all we can manage. In my new book A BEAUTIFUL MARSUPIAL AFTERNOON I wrote a manifesto titled THE RIGHT TO MANIFEST MANIFESTO. The title of this manifesto says it all for me really. THE RIGHT to manifest some THING to prove we belong here, can BE here. It's our world, it belongs to ALL OF US and we need to start taking up some room in it and saying it belongs to us. I support our right to creativity 100 percent.

Where are we going? In the United States we are currently spending about 2 percent of our budget on infrastructure. Not that long ago we spent 12 and a half percent on our bridges, tunnels, highways, clean water and air systems. Rome fell into ruin when its infrastructure was ignored. When commerce can no longer take hold to move across the land, everything else comes to an end.

It's so funny answering this with the Horace Engdahl nonsense being asked in a previous question. I wag MY FINGER at Horace Engdahl for not taking the time to TRULY see how vast American poetry currently is. Maybe Mr. Engdahl has yet to take the proper course in geography to see how his country could fit inside of Iowa, for instance, and Iowa being only one of our fifty states. Meaning that there are so many poets in this country. I have visited very serious, extraordinary poetry communities in Boise, Idaho, in Seattle, Washington, in San Francisco, in LA, Milwaukee, Chicago, Durham, Amherst, Buffalo, and many others. And of course my home of Philadelphia where many serious, thoughtful poets of conscience are busy writing poems every single day of their lives like their lives depended on it. We're doing just fine. I LOVE being alive right now for the poetry, and the poets, it's a difficult time with resources blatantly wasted on greed and war, and the tremendous suffering taking place. But I'm still quite astonished to be here with you all, and happy to be here.

Thank you so much for this opportunity to take part in this discussion.

* * *
CAConrad is the recipient of the Gil Ott Book Award forThe Book of Frank, and most recently a 2011 Pew Fellowship by the Pew Center for Arts & Heritage and a 2012 Ucross Fellowship. He co-edits FREQUENCY Audio Journal with Magdalena Zurawski, and edits the 9for9 project, and online video poetry journals Jupiter 88 and Paranormal Poetics. His most recent book is A Beautiful Marsupial Afternoon: New (Soma)tics (Wave Books, 2012).