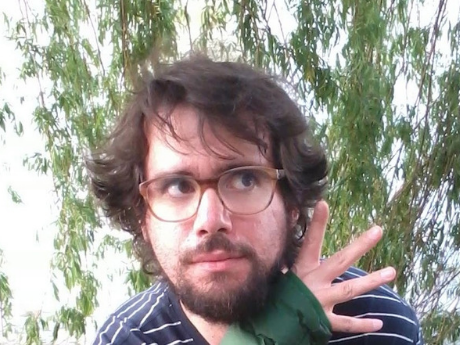 "We are all damned" the carpenter says
and "I'm a wood butcher"
when I tell him "You're a sculptor"
he says "A year ago at this time
I had surge—
surgery" with
hazel eyes
"surgery to remove a Christ
from my skull
I had dreamed about
since I was twelve."
The fact that Christ was there
without his apostles
explains nothing.

the dead are here and
you don't know how to breathe
for their attendance
you have to attend
here they come
set the table
the cherry table you made
with the cherry wood
it has lights in it
"I only pick the trees that grow out of
the most difficult earth
because it makes them tough
and I want tough trees"
tough trees are me
tough trees are mean
they raise me
I am number one in the tough tree family
the only child in the tough tree
family tree you'll see
isn't that glory
a carpenter
we have to learn how to serve each other
to go under the people who would
put other people down and serve them
and make the good in them happen
and we are damned
to serve
this cradle   a glyph   a letter
this wood cradle is burning but the baby will
never burn in it.
The baby who    will never burn in it
cut the umbilical cord and the telephone cord
with one sword. It's war

It is impossible to write a-politically. If you don't directly address politics in your work, this is a conservative ideology. If you do directly undress politics in your work, you at least have a chance of being awake while you are meditating on what your politics are and what politics is. What is politics I would like to know. It is the life of the polis, the Multiverse, all the voices, being channelled through you, and you responding to them, in dialog with them, one with them, and contradicting them.

We can either choose to examine politics in our poetry, or politics will define us on its own terms, often prison terms, stolen presidential terms, or term limits dissolved with money. "I must create my own system or be enslaved by another man's."—William Blake.

I was born into a bicontinental family. Half of us lived in New York, New York, The United States, and the other half in Belgrade, Yugoslavia. I was constantly exposed to different political points of view and to the necessity of choosing one's own only after a long rigorous period of people yelling at each other at various kitchen tables, quiet one-on-one debate, and solitary writing.

The problem is with the word "about." Poetry ideally does not write "about" things, it is the thing itself, a choreographical (strophe // antistrophe) process of precipitating wakefullness.

When I write politics which is all I am ever really writing I go out into the street and listen and bring my pocket pad. And three pens. I go somewhere dangerous that needs to be documented before it disappears or becomes assimilated into state narratives and I open myself to visions. The key thing is to breathe to remember. I need to breathe from the belly to blow a long line and engender a thorough thought process through which I can discover things, poetry being discovery, not recapitulation of what I already know, although I know I only know I know nothing, really I know nothing. How one comes to know is always a question.

A poet writes history, ISTORIN, to use Charles Olson's translation from Herodotus: "Istorin in him appears to mean 'finding out for oneself,' instead of depending on hearsay." A poet writes the findings out in a simultaneously packed and empty spontaneously improvised field of action. Urgency comes from finding out what's going on in a Benjaminian "moment of danger," which threatens to disappear the moment mouth is opened or pen is set to paper. Hence the need for spontaneity. If you don't get what's happening down in the poem, the state will force-feed you the toxic simulacrab of what's happening in its sweet soft shell. There is not one of us without food poisoning. There is not one of us without medicine: awareness, conversation, action.

For my first book Zero Readership I travelled through Belgrade and the Balkans for three summers after the wars of the 90s and turned into a sponge and absorbed everything I possibly could and wrung the sponge over the pages blank and watched the poems appear out of the shapes of the water.

For my second book And If You Don't Go Crazy I'll Meet You Here Tomorrow I documented global and personal crises and loves spanning the decade from 2000 to 2010, including a weeklong meditation retreat in upstate New York, and examined various modes of mourning, madness, and healing in those timespaces.

For my third book Wolfman Librarian I am making an epic mythography of lovers in New York City after the financial crash and during the rise of Occupy Wall Street Revolution, as well as inquiring into what Benjamin means by "Jetztzeit" or "Nowtime." How do the dead feel about their names being used to wage permanent war? The voices of the dead need to be heard and included in any true Democracy, along with the voices of the living, most of the time I can't tell the difference, that's how fast time feels.

Patient attention is revolutionary. Or as a wise Sensei once said, advising us how to write: "Attention Attending Tenderness."

If the artist does not engage her own politics, politics will engage her, and move her in ways she may not want to be moved. For instance: choose "life" or "choice." Which one sounds better? "Life." But what if "Life" in this case means a woman dying in a back alley abortion? How "Life" is that? It is in fact DEATH. Politics will turn your life into death if you let it. And sometimes there is no choice.

I want to ignore all judges, including the internal ones. The sound of their pontifications drowns out the real music I want to hear: the music of no fear.

In America a cosmopolitan is a pink drink, but really a cosmopolitan is a citizen of the Multiverse, who treats all sentient beings as extended family. This does not mean ignoring them, hating them, or seeing them once a year to smile at them and discuss the weather. How do we save the world and all us beings in it and to come?

It is impossible and we vow to do it.

"Individualism" of any kind sounds to me like a Reaganite American myth repeated by the state as a black magic trance to make us think that each of us can and should make it on our own, without any help, which is impossible. The ideology of "individualism" is an insidious form of spiritual union-busting. But YOU CAN'T FOOL ME, I'M STICKING TO THE UNION. Hallelujah! Or as the great Reverend Billy says: "Revolujah!"

Poetry questions everything, including itself, at every step. It is a highly rigorous form of self-interrogation, and since the self is never fixed, always transforming, there are heady complications. Mindfullness meditation is a useful instrument. Practicing it you develop an ability to see thoughts as thoughts without clinging to them and losing yourself in delusion realms, fantasy worlds where corporations are people. Poetry is a dangerous and disorienting art, you have to go all the way out into the field and get the words down, only then can you bring them back. And yet there is no return from this field, only further precipitation of change. When you do not risk something, you are writing verse, not poetry. This field is found beyond one's comfort foam.

Propaganda is concerned with the fabrication and dissemination of lies, which are constructed in the absence of this relentless questioning and self-interrogation.

The internal censor is hard to find and dissolve. The state censor is hard to track and defy. In the open without fear, poetry is written for the act of creating itself, not for the fruit of the action. This is the sacrifice necessary to make making visible. Poetry is making made visible in the open sensorium of all sentient beings. When Orpheus forgot a line, the houseplant would remind him. The fact that the houseplant was his death did not trouble him.

Poetry is not the problem. The problem is life: how do we live without destroying ourselves. How do we save the planet we have poisoned. How we write will depend on whether we are extinct or not. Perhaps when we are extinct history will begin. But I don't think so: I think history is now, and every moment, and whether you write it or not, you are it. You are history already. So what is there to fear when you write.


* * *
Filip Marinovich is the author of Zero Readership, And If You Don't Go Crazy I'll Meet You Here Tomorrow, (both from Ugly Duckling Presse), and of the "frothcoming" Wolfman Librarian. Poems appear online in EOAGH #7, Revolutionesque, Jupiter 88, Youtube, and Brooklyn Rail. In the summer of 1994 he worked at the Law Library of Pfizer Headquarters in midtown Manhattan. In the fall of 2011 he worked at the People's Library at Occupy Wall Street. Blessed blessed blessed be Time.