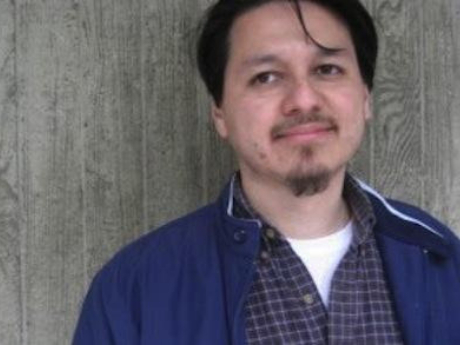 Behind the cornfield, we scaled the mountainside
looking for a foothold among the crags,

rooting out weeds, trampling on trash,
the trek as if it were a holy crusade:

bodies armored, mounted on horses,
banners fluttering in the air.

Then one morning, we stumbled upon the thing,
dead, cramped in a ditch, covered in ants,

trotters grimy, a purple snout of flies
and not a dollop of blood,

but a thick piece of hide, cradling
about fifty pounds of hog.

Someone said, "Kush! Kush!"
as if to awaken the thing.

I thought about the carcass, blood-slick,
staggering into the room,

grumbling and drowning as if deep in the mud,
eyes buckled in fear,

bones breaking down to the ground, open
to the chop and tear of human hands:

pork and lard, forefeet, fatback cut into slabs,
an organ fattened and butchered.

It continued for weeks, a few of us
meeting in the afternoons

just to look at the steaming belly, maggots
stealing the gray of the brain,

each time, one more barefoot boy
probing the eye socket with a stick.

Some of us came back armed
with picks and bars, shovels dusty in our hands,

until the ground groaned with war.
The sky fell and cracked the earth.

How was I to know
they would be hooked, hacked,

snouts smashed on the wall,
their bodies corkscrews on the floor?

How was I to know
I would bury this pig, rock after rock?

The fact that I'm able to think deeply and extensively about my experiences and that of others in poetry is itself something I value. I value the examination of anything men and women struggle against in this world. Human experience will always wrestle with the political and it seems to me one can't live without the other. As long as humans live on this earth there will always be politics limiting that human experience. Therefore I think poetry is ideal to question that desire for power and the distribution or lack of power. Everyday, our world is being reduced to an experience where misery is visible everywhere you go and only a small amount of people, a minority, benefit from the wealth of the world. Of course, to choose to write is in itself a political act. I was born in Latin America and my experiences have taught me that, whether you live in an empire like the United States or in a third-world country like El Salvador, to write is to communicate and activate the reader into social change or it can also be to maintain the dominant ideology.

This is not to say that poetry should only be involved with these two types of views. It can be a very limited and restricted way of looking at language. There's a range of voices between social change and the dominant ideology. I think the world of poetry is big enough for all modes of writing. To me the function of poetry is about naming the truth. It is about constructing a new language, and as long as there is a necessity to aesthetically form an authentic voice, there's no need to examine whether it's important or not. The human voice in struggle will always be important.

I don't write about politics per se, but as I said before, anything one writes is a political act. I write about the civil war in El Salvador, the long years of immigration and my permanent state of exile. The political inhabits my work because I am an immigrant, someone who fled his war-torn country, and an exile, who carries the broken memory of his birthplace and all its dead. So when I write I don't worry much about whether my work is political or not. However, when I write I'm interested in loss—loss of a place, family, friends, and the self. This is what drives my poetry. It seems like I'm condemned to see and hear that which once was lost and which can only be saved through words. For that reason, I try to construct a language of mourning where the driving force is memory. I believe that to remember is an act of struggle against history. It is an acknowledgement of one's time and one's acceptance of it. As it's been said, forgetting is passive, but remembering is active. And remembering is the ideal vehicle for poetry.

I often struggle whether my work is publishable or not because of its origins, because I keep thinking I'm excluding certain people out who are not aware of my experiences, and it's always easier and much comfortable to publish that which one knows best. However, the result is always rewarding, anyway you look at it. Publishing is not important. It's the act of writing that's important, what you feel about your work in that sacred moment of writing. Richard Hugo said that.

I look at the work of Paul Celan, Czeslaw Milosz, Roque Dalton, Claribel Alegria, Eduardo Galeano, Edward Said, Miguel Hernandez, Randall Jarrell, Eavan Boland, Philip Levine, Yusef Komunyakaa, Cesar Vallejo and Pablo Neruda, to name a few. These poets have given me a greater understanding of the world and culture around me. That's why I go to them.

My responsibility is to write, which helps me get through the beauty and terrifying state of our world. If I don't write, I'm a mess. I become your typical disgruntled employee on a Friday after work letting out all my rage on the road. When I do write, I don't think about any responsibility because I'm basically writing for myself. I'm not trying to engage others. I'm trying to discover something about myself and the world around me. If I don't find anything surprising, then it's probably not worth sharing. If the emotion I create in my work is honest, then it will resonate with others. My responsibility is only to my own personal ethics and aesthetics. That's my politic, my own creation, before some else knocks down on my door and dictates his or hers.

I don't want to assume that I know exactly what Engdahl meant, particularly because I don't know the entire context of his thoughts. However, I do know that, because of the U.S. power over the world, maybe there's an underlying tone that Americans are overtly privileged and therefore this may cause a lack of contribution to the bigger dialogue. This could be a possibility of what he meant, which to some may sound defensive. However, I think he might be on to something. If American literature hardly has a place in the discourse of the American mainstream, then world literature must barely get a chance in our society. Nevertheless, when talking about poetry, I think this country has produced visionaries who have written serious literature. Just look at our Poet Laureate Philip Levine.

Maybe this is a question of the poetry establishment and who gets chosen to represent Americans and who doesn't. Is the establishment truly open to the wide range of contemporary voices we are experiencing today in poetry or does it do its cherry picking, selecting those that reflect its own dominant ideology? Is the establishment open to its minorities, and its poetries, or is it only interested in poetry that only reflects the establishment's interest. I'm talking about conservative poetry, the type of poetry that has a reason for being conservative. As I've stated in other discussions, conservative poetry cannot afford to denounce that which feeds it. I don't denounce this type of poetry. I think the world of poetry is big enough for all modes of writing. On the other hand, there is a danger, when one type of poetry holds the reins of power and dictates over the rest. Poetry should be plural.

Don't Whitman and romantic individualism go hand in hand? I thought he was the great rugged individual who could embrace multitudes. That's a great romantic ideal. That's what so charming about Whitman. Neruda extended this trajectory. Romantic poetry has had a huge influence in my work. I'm thinking of Keats, Wordsworth, Blake and Whitman. There's always space for more.

I think propaganda is persuasive language with a focused goal. It's what political poetry can be if the language fails. In other words, it can become a political pamphlet. As I have said in other discussions, during times of war, language is bound to depict the reality of the times. Therefore, poems tend to have a documentary tone. They become political pamphlets trying to push a particular methodology. At the moment of creation, poems fulfill an essential function, but they don't always reach a high artistic aesthetic. That's because during times of war there's little time for editing, rewriting or building an iron-like form for their poems that will outlast the very poets themselves. The intentions of the poets are generous and noble. However, after a time of collective despair, the poet needs time to meditate, to shape and bend his or her work into a form that will outlast the experience of the war. The artistic craft needs to break through the chaos of war and reflect the wisdom of poetry. It is only after the war that poetry begins to move away from the stylistic modes of writing common to war. Poets ask questions. Propaganda gives you answers. With poetry, poets live with the questions, all their lives the same questions. That's why they write.

If you live in the U.S., I think poets don't have to be concerned with editorial censorship. That's an editor's job unfortunately. However, if you live in a third-world country, under a regime, poets are censored, even killed for writing against the system.

One could write volumes on this topic and I'm not sure if I'm capable of answering such a complex question, however I think the political voice is finding less and less of a space in contemporary poetry. Most poets in the United States are in danger of becoming a decorative function as opposed to poets in the rest of the world who often question the system.

I think we're moving in a more democratic direction in contemporary poetry. The reemergence of minority voices in this country, alongside more established voices and names, is extremely essential to coexist within the cannon.


* * *
William Archila is the author ofThe Art of Exile, which won an International Latino Book Award in 2010 and was honored with an Emerging Writer Fellowship Award by The Writer's Center in Bethesda, MA. He has published his poems widely, including in AGNI, Blue Mesa Review, Crab Orchard Review, and The Georgia Review, among other journals and anthologies. His book was featured in "First Things First: the Fifth Annual Debut Poets Roundup" in Poets & Writers. He holds an M.F.A. from University of Oregon and currently lives in Los Angeles with his wife, the poet Lory Bedikian. His second book, The Gravedigger's Archeology, won the 2013 Letras Latinas/Red Hen Poetry Prize.