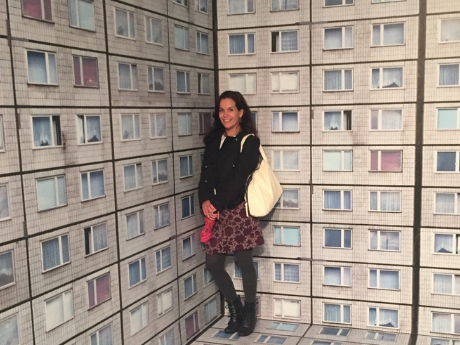 Marshy spillover is first to flood: where water
first met sand and pilings lost all anchor.

Where nothing rose above the surge, that wall
of black, black water. Where houses buckled, crumbled.

Where the storm's uneven scrawl erased.
While miles away I watched a map of TV weather,

the eyewall spinning closer. A coil of white, an X-ray.
I imagined my parents' house swept to its stone slab.

While I remembered sixth grade science, how we traced the city
like a body, arterials draining in the wrong direction.

We shaded blue the channel called MR GO that pours
from the River to the Gulf, trench the storm water swallowed.

The levees overfilled, broke open. And I came home to see
the city grieving. The city drained then hacked apart.

"Cannot Fish or Swim. How the hell are we supposed to feed our kids now?" As I drive through Grand Isle with my father, I write down the messages. The signs are hand-lettered on poster board, on plywood, spray-painted and stuck on electrical poles, nailed to fences. Expressing frustration and revealing loss, the signs all over Grand Isle show citizens' response to the oil spill firsthand.

The signs in Grand Isle offer a new language, the language of disaster: "Your mother loves you, BP. Clean our Gulf," "Louisiana, Sportsman's Nightmare," "Tony Bologna," "Shame on you, BP," "BP, we want our beach back." And over and over: "Beach Closed." I know this language. When I returned to my native city of New Orleans, three months after Hurricane Katrina, the city was full of signs. "Do Not Demo" and "No Trespassing" and "Private Property" -- in front of empty lots, houses swept to their stone slabs. "We're coming back! We're coming home!" nailed to a gutted house. "Demolish it. Took the memories with me" on a board staked in a patch of dead grass.

This summer—August 29—marks the fifth anniversary of Hurricane Katrina. Louisiana, Mississippi and Alabama are far from recovered from the storm, and now the coast is faced with this new disaster. The two disasters have crucial similiarites. Yet outside of the Gulf Coast, everyone I go, people tell me that BP oil spill is nothing like Katrina. People insist there is no comparison. "That was a natural disaster," a man in my neighborhood tells me. Another woman asserts, "The oil spill is a man-made problem." What devastated New Orleans, however, was not the storm but the breaking of the levees and the flood that followed. What devastated New Orleans was the failures of the Army Corps of Engineers to build levees that would keep the city safe.

In Grand Isle, along the narrow road bordered by water, the pink and green raised cottages -- or "camps" as they are called in Louisiana -- are empty. In the local souvenir shop, one of the island's only stores, the woman behind the counter tells me she has absolutely no business, though usually in mid-June the island is packed with locals and visitors. "There are no families now," she says. Down at the beach, where we are not allowed to go, a long orange boom snakes over the sand at the edge of the Gulf. A small group of workers in Haz-mat boots bend down with garbage bags at the water's edge. Several tanks sit silent in the sand. A black military helicopter crosses and re-crosses the sky.

And I'm reminded again and again of Hurricane Katrina. In 2006, a year after Katrina, I stood in front of the beloved restaurant Camellia Grill in uptown New Orleans, which like many places was closed. But the restaurant was covered in messages—hundreds of post-it notes—anonymous letters to the restaurant. "Write a Love Note to Camellia Grill" someone had written on a piece of paper and they'd left the notes and a pencil in a bucket. The pink, blue and yellow notes covered the surface of the building: "Dear Camellia Grill, I can't bear the thought of you not being here" and "So many of us grew u eating here. We need you to pen to feel more normal" and "Come home!"

Grand Isle's public library still wears its blue roof, five years after the hurricane. As we drive in, stunted trees with no leaves ravaged by the storm's winds are stark against the sky. Bridges are still broken and piers still split. It is so easy to believe in the language of closure and recovery. But all it takes is one visit to the Gulf Coast to see that this fragile landscape, a web of swamp and bayou, is barely recovered from the hurricane and is now devastated again by the BP disaster.

On the way back to New Orleans, we drive by a cottage with a sign naming it as "Mama's Dream." Over the name-plate, someone has written, "Mama's Dream is Gone." The signs all over Grand Isle are documents. The signs are voices. More than ever, now, as the anniversary of Katrina approaches and the new disaster continues to unfold, we need to listen.