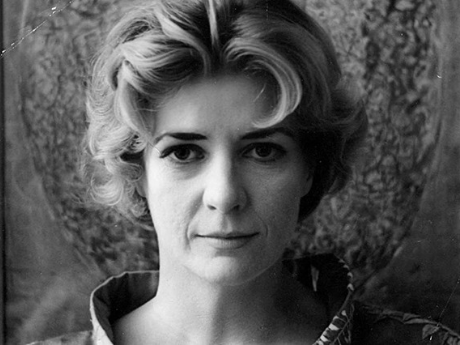 (It became a sort of mantra, which I still say to myself sometimes when trying to fall asleep.) I taught myself numbers by singing them to the tune of the Barcarolle from The Tales of Hoffman: "One and two and three and four...." I read the usual children's books, but my next real love was Bernard Shaw. My mother discovered a copy of Mrs. Warren's Profession in the bathroom. I had no idea of what it was about, but I was enthralled by Shaw's wit and his sardonic view of humankind. I think this was a lasting influence. An early male critic said that my poems made him run his finger around his collar. This was meant to be unflattering, but premature feminist that I was, I found it delightful. (I was about eight when I discovered Shaw, according to my mother's notebook.) Of course I was a promiscuous child, and read everything I could get my hands on, and as other poets have said, this included the text on breakfast food packages and the labels on ketchup bottles, as well as having free run of my parents' library. No attempt was ever made to censor my reading. I remember when the public librarian attempted to steer me towards the children's book section, and my mother's firm admonition to her that I could read grown-ups' books if I so chose.

My parents were both romantics: father favored the poems of Keats; mother went for Whitman. No evening of my childhood passed without my being read to. But I think my choices of Stein and Shaw show that my tastes were different. I remember that when I was eleven or twelve I came storming home from school demanding, "Why didn't you ever tell me about Pope and Dryden?" They were stunned. Our library, copious as it was, didn't contain the works of either. These were lasting influences. I have continued to prefer, and write, poems that have what you might call "a sting in the tail." Add Catullus and Juvenal. I adored wit, irony, and intellectual precision. And I have always insisted on being funny from time to time. I wouldn't advise young poets today to follow in my footsteps. Poetry is serious stuff; it doesn't pay to be funny. I used to get letters from young women regarding the lines from my "Pro Femina," which end the third section:

...if wedded, kill guilt in its tracks when we stack up
the dishes,
And defect to the typewriter. And if mothers
believe in the luck of our children,
Whom we forbid to devour us, whom we shall not devour,
And the luck of our husbands and lovers, who keep
free women.

I was so often queried about that last line that I had a stamp made that said, "Irony, Irony, Irony." As you see, the poem is in a classical meter, much influenced by the great Roman satirists. It is the grief of my life that I didn't have a classical education. My mother, who'd had years and years of Greek and Latin, and felt that they had been useless, concentrated on my being "creative," as she wished she had been. It was years before I realized what these languages had done for her, and by then it was too late. I had been sent to Sarah Lawrence. "If only I'd had a classical education" has become a family joke with my husband, who had one. But my parents had done so much to further my education by teaching me to love reading and writing that I shouldn't really blame them for not sensing my cast of mind. And I have remained true to my first loves for these many years.

There was no road-to-Damascus moment of childhood or adolescence at which poetry suddenly claimed me, but I took solid pleasure, as soon as I encountered them, in Stevenson's poems for children, and Lewis Carroll's brainy nonsense, and the lyric capabilities of Twain's colloquial prose.

One day in Mexico in the spring of 1963, I was chatting about poetry with my then new and now old friend, the painter Bruce McGrew. I'd been writing poetry, or trying to write poetry, or working towards one day being able to write real poetry for six or seven years. I hadn't published anything yet, and I'd experienced poetry mostly as a labor I'd assigned myself, a task I toiled at, scribbling and studying and constantly thinking, brooding, going crazy about.