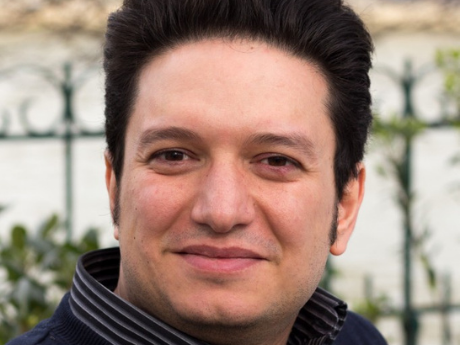 He wakes sliver by sliver
and walks in slivers
And his many slivers
have afflicted death.

His index finger moves across the sky
asks for permission
asks him
What can a sunset cure
except sorrow?

That’s all.
The question which is the answer
will remain long after us.
So leave it, let it go!

Insane is he
whose speech makes the walls
look in another direction.

Insane is he
who keeps excavating the night
to conceal the bits of darkness beneath his bed.

Insane is he
who said he would leave
but left

who said he would stay
but stayed

and who said he would laugh
but laughed . . .

Insane is he
who wouldn’t leave or stay or laugh
and considers excavating the sense of “but.”

He must be insane
this man tied by a rope to the sunrise.

He is insane
this man who was shot yesterday
who still plans his escape.


—Translated from the Persian by Ahmad Nadalizadeh and Idra Novey.

Born eighteen days after the outbreak of the Iran-Iraq War in 1980, Garous Abdolmalekian is one of the most prominent figures in Iran’s contemporary literary landscape. He has had an enormous influence on the new generation of Iranian poets addressing the dramatic social changes under way in the country. The author of six award-winning books and an editor at a leading publishing house in Tehran, Abdolmalekian has become a pivotal voice among poets in Iran determined to convey the inner life of their country and the  stifled songs emerging from the silence in which they came of age.

While the force in many of Abdolmalekian’s poems is political, his approach to them is fabulist. In “Border,” he brings the blasts of a battle into the sheets of a couple’s bed. In “Bits of Darkness,” a man shot the day before continues hoping to be released into another sunrise, though he’s been dead for twenty-four hours. In Abdolmalekian’s poems, even the dead go on hoping for intimations of a kinder world. Yet his images never retreat into any kind of easy, blind escape from reality. Instead, they chart the difficulty of not just accepting but prevailing over unspeakable violence and loss. His sensorial images flip the private into the political with a deceptively subversive subtlety and also with startling intimacy. An injured veteran begs his mother to change his diapers. An unspoken death manifests in the dust circulating in a room, aching to be kissed. The political impetus in an Abdolmalekian poem is never evoked directly. Rather, it is left to flow quietly, powerfully, beneath the poem, the unseen groundwater of each speaker’s life.