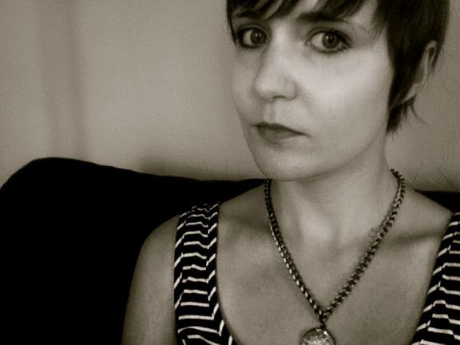 I have no ear for who
will call me vermin
but I am giving myself
time to invent
a new crisis. I can live
or die by the syrupy
mood I wake up in,
replace my memory
with a thicker pudding.
There is legend
and there lies
the problem. Okay
hurricane, make me
a skinless girl.
Play the siren.
Even though I
have no context
I'm all yours.
I shape my mouth
into a poison halo
and rain.

From Dead Year (Sixth Finch, 2016). All rights reserved. Reprinted with the permission of the author.

I started writing "Dead Year" during a gray, bitter New England January without much more than a generative process in mind—a challenge to let myself write every day without constantly deleting the first line, staring into space, and giving up, which is too often my pattern. Initially titled "New Year," an easy and obvious reference to the month I was writing within, the series basically began as a litany—of resolutions I mourned over not making in the past, of directives and warnings to myself for the future.

At the time, I was reading Lidia Yuknavitch's The Chronology of Water, and I walked around feeling infested by it—the gut-punch to living with trauma and grief, the mapping of survival on a body blown open. Soon after I started writing "Dead Year," the poems became both confrontational and elegiac, a push-pull between rage and despair. As a person who exhaustively tends to dodge conflict and confrontation at all costs, the poems were clawing at the walls with an acidic force I hadn't expected. I felt squeamish at first; I didn't think I was prepared to map my own tumbling act of survival, but the poems were out for blood. They fought back. In the end, I stepped into the muck of trauma and grief and took an honest look around.

The "Dead" in "Dead Year," then, became a sort of bitter, unapologetic anthem. A way to scream and scratch and mourn and confront loss of self, and to consider what it is to be a woman who feels threatened by herself and most things and most people. Allowing myself to sink into the muck while fumbling to reconstruct hope and a way forward.

I'm interested in the poetics of threat, and what happens when we begin to peel back the layers. How do we assess our own damage? What the hell does reclamation look like? It's all a vast, boundaryless mess, and I think I'm inchworming toward feeling okay existing in that mess. I can both love and loathe myself as poisonous vermin. I can be both annihilated and annihilator. "Dead Year" became, in a sense, a homing device with which I continue to map a nebulous center.