Home > Features > In Their Own Words > Aricka Foreman on “A Longed-For, Which I Enter Gratefully” 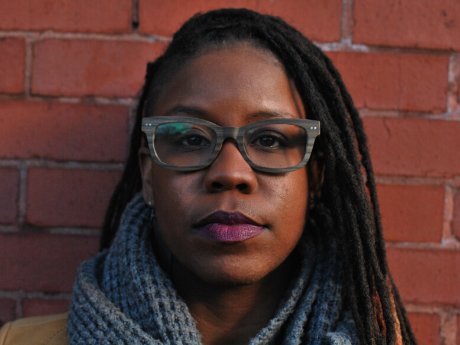 A Longed-For, Which I Enter Gratefully

Scraped slow with ink
I return, question what is
a symbol other than a con-
stellation of becoming
Debate which dogmas
can withstand the years
Your fingers like primas toe
fresh-hot scars with ointment until
we stand in one shadow spilled
against the late summer light
across your bathroom floor,
you: home when I am want
You salve like this&this & this
Light blinks us back to that Harlem
fire escape where we fired frenetic
cigarettes into the sun, talking
about our fathers, whether
the duende of making love is
capable without apparitions or
only constant in an omen’s lap and
If we’re dying for clarity these days
Veils are nimble, breach Bones grow
despite their feeble failure We ask
what ambient garble news is now,
touch for the act of touching,
my need for tenderness
so small it fits at the edge
of a fingernail, at the edge
of the fingernail’s edge
At night we sleep
in the same bed, pull
breezes from our breathing
I only snore when it’s safe
Know safe means sleep
close to likethis & too           this

From Salt Body Shimmer (YesYes Books, 2020). Reprinted with the permission of the author.

On “A Longed-For, Which I Enter Gratefully”

I map the circumstances that drive me toward a poem. Often, they involve transience. In its lyrical impulse, the apostrophic “I” speaks at times away from itself only to address an intimate “you” on the return toward another fractal self. An oscillating door. The poem, sans periods, tracks a fluidity, allowing the speaker to swim through portals of time, engaged with a multitudinous audience. That impulse rings loudest, (truest?) with an audience of one. The speaker spins the dumbwaiter, each rack with my capped, spiced selves suspended in motion, blurred by the spinning. In the spinning I see how the “I” grapples to hear, see, eventually speak.

The poem relies on the senses and their sensibility to aid a speaker searching for an anchor, a small permanence intimate with temporality. In the moments I recognize how it makes a home in my body, not just the corporeal experience of pain, pleasure, hunger and thirst, but what memories are recorded at those sites of sensuality. Aurality permeates many of the poems in Salt Body Shimmer, but this poem is closest to the thresholds of touch. And what happens to us as we experience those thresholds. A small question of where we find ourselves walking along them, desiring to cross them, asking what crossing enacts, if it harms or invites. How we are cautious to admit ourselves capable of both transgression and tenderness. The two also touch at one point or another.

“Another important way in which the erotic connection functions is the open and fearless underlining of my capacity for joy,” Lorde reminds me the gesture itself enacts a measure of finding. Spinning that rack, which self arrives and when. And, too, anticipation. What hope. It’s an impulse that traverses the constant need need feed need of our capitalistic experience. If I can find a moment of pause, I’m most successful and able to write a whole poem (not a perfect one) when a sense of wholeness nears apprehension: as a poet, as a Black person living in America, as a Queer woman, these selves formed by inevitable negotiation, especially where harmony is slippery. It’s a desire to invoke that act, in a poem, in a phone conversation, in a walk in slight rain on a grey Chicago afternoon to a museum, that I aspire to. That invocation lives with us, and is delicious with materiality, if we stop long enough to let it take us over.