Barbara Jane Reyes on “An Apology” 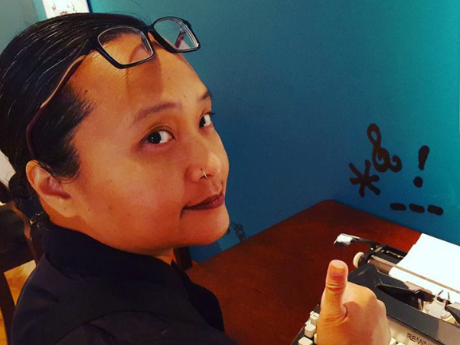 
From Invocation to Daughters (City Light Books, 2017). All rights reserved. Reprinted with the permission of the author.

Writing a poem to Norife Herrera Jones, a woman I never knew personally, was fraught with questions about right. What is right. Do I have the right.

Norife Herrera Jones was 29 when she was murdered by this "quiet man."

Newscasters mispronounced her name as two syllables with a long "i" sound.

Her friends called her Janie.

After a couple of days of local news media mispronouncing her name and further humanizing her murderer, and further detailing her gruesome murder, it all just stopped. I didn't hear another word. I couldn't find anything online.

When I was launching my book To Love as Aswang at the Philippine Consulate in San Francisco in 2015, my community was protesting outside, because of the murder of Jennifer Laude, a transgender Filipina murdered by a US marine. Laude's murder in 2014 made international headlines, and compelled so many into action. Here, we are looking at the larger picture of the pervasive US military presence in the Philippines due to the Visiting Forces Agreement between the USA and the Philippines, and we are also looking at how our societies fail to value the life of a transgender person.

This series of protests on Laude's behalf, along with the series of protests and international attention surrounding Mary Jane Veloso, the Overseas Filipina Worker sentenced to death as an accused drug mule in Indonesia, made me question why no one in our community knew about Norife Herrera Jones, who was a woman once living among us, here in Northern California, which boasts one of the largest, oldest, most organized Filipino American communities in this country. Why this big empty space, for whom do we advocate. How do we decide for whom we come out en masse. Whose lives do we know to honor.

I always think of one of my poetic ancestors, the late poet Jeff Tagami, when I cross the Pajaro River, on the way to and from Monterey. He passed away, also in 2012. I always say, "Hi Jeff," and I place my hand over my heart. Tagami's gorgeous October Light (Kearny Street Workshop, 1987) is centered around that river, the community's life vein emptying into Monterey Bay, and into the Pacific Ocean. These days, when I am crossing the Pajaro River, I think of Jeff Tagami, and I think of Norife Herrera Jones. I think of the waters of the Pajaro, eventually making their way back to the Philippines.