Home > Features > In Their Own Words > Brian Blanchfield's “The City State” 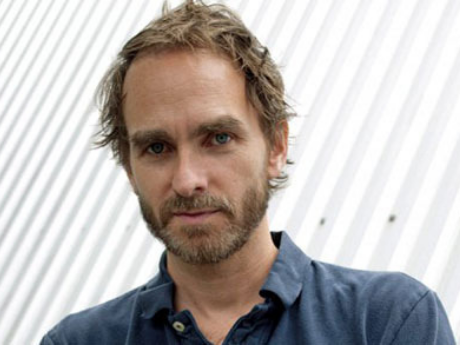 Remember in Corinth, walking home from the piers, wet
in the aftermath of a squall? Through the meat packing streets,
under bigger hooks blood slick on the sandals, across

the garment district: bone buttons, stronger cord or—what
more did you need?—hard rolls, then fish and flowers in
descending sectors, aspirin and batteries in your arms,

for the apartment. Remember answering machines? The gods,
be they pleased, of whichever specific needs, accommodating
singly. Barnaby, after the tone, this is the guy from the grove.

Peaches are in. Snap beans (ping in the bowl). Good surprises
if you hike up into the higher coppices with me in mind.
Along the manifold fulfillment of local plans, outlanders

often strode through hollering, singing the uncertain song,
and so we expected we knew the words—any deities
to propitiate, la la—when, in the melody familiar, a man

and a youth drew us to the window. Good news they called up,
delivery. Emissaries broadcasting a smirk, saying what still
from the sill we could only oversee. Remember how soon

we found none of the old options applied. Talk. Listen. Door.
I do this one thing all day long and so do you, I know now, first
Corinthians. I squat on the fire escape for better connection.

From A Several World (Nightboat Books, 2014). Reprinted with the permission of the author.

On "The City State"

"The City State" is something of an homage to Guy Davenport. In "The Trees at Lystra," the opening story in his collection, Eclogues, Davenport recasts from a Greek adolescent's perspective the New Testament story in the Book of Acts in which Paul and his companion come portentously to the lively village to inveigh against polytheism and are mistaken ironically for Zeus and Hermes. His observant narrator is likely Timothy, he who later decides to convert, leave home, and follow Paul, becoming his favorite ephebe and protégé. It's possible to similarly imagine how it would've been then for a young Corinthian to be on hand when, with Timothy in tow, Paul came to deliver his famous first epistle ("but when I became a man I put away childish things") to yet more Greeks whose lifestyle (including their uninhibited sexuality) he felt was a result of their localized "superstitions" and unfathered spirituality.

The Corinth of my poem is of course also New York, an almost entirely faded New York where one circulated through the city precisely because it had districts one visited for discrete purposes: replace a button in the garment district, buy a plant in the flower district, then on to book row, etcetera. I suppose I am suggesting an equivalence between patronizing localized districts and propitiating the area deities. The mostly commercial and economic ways of consolidation eliminate not only the character of specialty (the genius loci) but also the opportunity for public civic life. By that analogy, is Target then (or more finely put: Amazon) the highhanded monotheism come to chasten and surmount all animism and attunement to the physical world? Well, if so, it's important to note that Manhattan, a late case study, becomes more hedonist as it gets less pagan.

As the first poem in the first section of my book, A Several World, "The City State" serves perhaps as a goodbye to all that. The book gradually moves away and, I guess, keeps bothering over the polis and other ancient ideals in its next new errant upcountry locales. This poem and one other, "According to Herodotus," are the two from a six-poem exchange with Richard Siken—now my fellow Tucsonan—that made it into the book. Richard's versions of or responses to some of the same material are found, with mine, at Likestarlings, whose editor Jeffrey Pethybridge first enlisted us in the collaboration. Thanks to them both.