Home > Features > In Their Own Words > Cathy Linh Che's “Pomegranate” 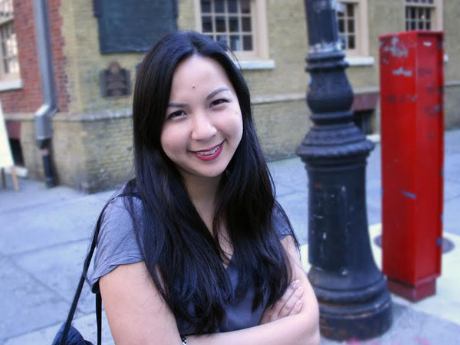 I open my chest and birds flock out.
In my mother's garden, the roses flare
toward the sun, but I am an arrow

pointing back.
I am Persephone,
a virgin abducted.

In the Underworld,
I starve a season
while the world wilts

into the ghost
of a summer backyard.
My hunger open and raw.

I lay next to a man
who did not love me—
my body a performance,

I was the clumsy acrobat.
When he came, I split open
like a pomegranate

and ate six of my own ruddy seeds.

I was the whipping boy.
Thorny, barbed wire
wound around a muscular heart.

From Split (Alice James Books, 2014). Reprinted with the permission of the author.

Cathy Linh Che's debut collection of poems Split is a fearless exploration of inter-generational trauma, from the Vietnam War to life in America, forty years later. Split navigates, survives, overcomes each obstacle presented before it (whether confronting a whole army of soldiers or a singular individual—the perpetrator of sexual assault). Cathy Linh Che's poetry beckons an analysis of self and situation which extends far beyond the personal narrative. Split is a reminder that we are much larger than ourselves, we contain multitudes.

"Pomegranate" was written during a spark writing exercise at my final Kundiman poetry retreat. Sarah Gambito had us write for an hour as she lead us through the writing prompt: What is home? Give me an image. Write toward the contours of a poem that is important to you. (For me, it was Anne Carson's "The Glass Essay.")

By the time I started composing this, I'd been thinking about mythology and archetypes. I'd been thinking that Persephone's being carried off by Hades felt analogous to my experiences of being sexually violated as a child. The experience of being taken again and again into an Underworld. I'd been thinking of my mother's rose garden, my mother as a figure for Demeter, and I was thinking of trajectories. Trajectories toward light, and the impulse to continue looking at darkness. About what it means to eat in the Underworld. How someone who'd been violated is not supposed to have desire.

I'd been thinking about hunger and consumption. What it means to starve oneself, what it means to grieve. That every unsafe sexual experience hearkens back to earlier acts of violation. That looking again and again at one's own damage in order to write is a kind of cannibalism.

And the final image has always been alluring to me. A reconfiguration of the Sacred Heart image: one that incorporates my parents' experiences of war. What does barbed wire do? Protect, prevent trespass. Create an enclosure. Act as a crown of thorns to signal a kind of exalted suffering—and the muscular heart: well, that's endurance, the body's final answer.