Home > Features > In Their Own Words > Danniel Schoonebeek's “Nectarines” 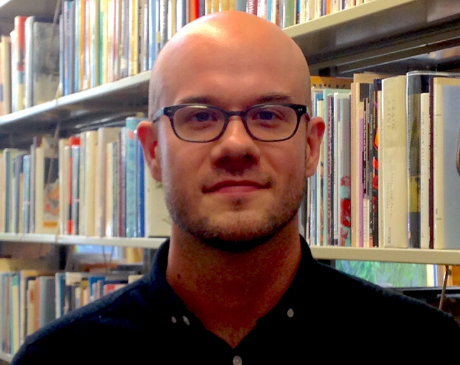 in my pocket    I was a man of obscene wealth

I owned a pissed mattress       her grease stains

and worn patches       the bedbugs inside her

they worshipped me        I had a spell of shingles

I wore my red eyes proudly        I flaunted my blisters

I rode a cat named Dusty        nineteen pounds he dragged

I had a very expensive sister        Tiffany Laurel I named her

and ketchup stains rice cake crumbs       she could never rid

from her blouse        If I scrape the plaque from my teeth

I'm tearing the pulp from the clingstone        and sucking another

Her face like a word problem        I answered wrong and erased

and finger the navel        of Janet Jackson whose poster


That was the year        the boy named Billy happened

Billy with his face        like a fruit bat wearing white face

Billy with his tongue        that liked to slop up nectar

In her bedroom I heard him        disappear himself

inside my sister        The wetness in her whimper

I said to the bedbugs        the blisters the shingles

Even the faithful cat        I found him licking the dirt

from his paunch in the sun        and guarding her bedroom door

And Billy with his face        like a dead tomcat's asshole

Billy with his problems        and his very expensive teeth

Billy with his tongue        that slopped the plaque from sister

lapped the stains        the rice cake crumbs from her blouse

licked inside to her nectarines        and sucked at the pits

Tiffany Laurel was off        shaving her legs in the river

I tore you from the wall        erased your snared mouth

Billy with your two front teeth        in my pocket

I tore the white pulp beneath me        tore Janet Jackson

and left you on sister's bed        a pile of moist cremains

the nectarine juice        leaking from the hole

where my two front teeth        were missing

they're drowning        but each morning they ask for a story

my very expensive sister        watching from the shore

the crumbs in her hair        Tiffany Laurel I named her

the ketchup stains on her blouse        the nectarine pits

hidden beneath the cotton        and my god the silver Billy

"Nectarines" really started when Melissa asked me if I'd write a poem for a track off Siamese Dream. She used to host this reading series called Polestar in the basement of Cake Shop, and the idea was you take a record like Doolittle or Super Fly and you assign each poet a track. Give them a little head start, maybe a month to write a poem that approaches their song in some way, and when everyone meets in the basement they read their poems in the same order as the track listing.

I'd done a good job of avoiding Siamese Dream so far, apart from the music video for "Today" and the album cover, a poster of which was tacked to my sister's bedroom wall in 1994. And you're probably familiar with the two girls on the cover: no longer conjoined twins, one of them is smiling into the camera with bangs, the other one's looking off-camera, post-cherub, with parted hair and the sun hitting her cheek. There's a white plastic chair maybe, or a snippet of foliage, but they're meaningless and eaten alive by the photo doctoring. The font is a minor disaster. But the photograph feels like you could walk out your door and step into a cloudless day in November in the 90s.

There are people who'll testify: when a criminal dies, he dies with the last thing he's seen frozen upon his eyelids, and this album cover does a criminal job of freezing the 90s upon its own. But my first words were No, Melissa I hate the Smashing Pumpkins, you're talking to the youngest of three, a kid whose siblings blasted Vitalogy and Jagged Little Pill and Blood Sugar Sex Magic down his hallways. A kid who fled toward punk and hardcore as the pièce de résistance of his family identity. And what is it about Billy Corgan's face, the canine tooth that appears behind his lip when he soft-snarls, even the lilting put-upon growl that comes out of his mouth, why does it revolt me and make me feel like I'm burning my hand on a kettle or swallowing ipecac.

That rant, she said, why can't that be the boarding tunnel into the poem? And by the time I'd agreed there was only one song left on Siamese Dream, the longest track on the record, an eight-minute and forty-three second instrumental called "Silverfuck."

Because you oppose what opposes you, you love your opponent. Because you revolt what revolts you, it becomes your poem. How many records you love, how many paintings and poems, or people themselves and vocabularies, how many fabrics, the appendicitis and cysts, ways of using tongue, or these creases that slacken your face: how much of the world that you love began as your enemy? You come to love it by the way it revolts against you, by revolting against it yourself, and both of you failing somewhere along the insurgence.

Writing this poem I hadn't written yet, my thinking broke along two lines, and the first was taboo. That fall I was rereading Faulkner's Hamlet, a book that stars the legendary Snopes family, who are revolting even by Faulknerian standards because they're one part infestation and one part blight. They're a family composed of taboos. And specifically I was rereading the scene where Ike Snopes fucks a cow. I've been told, and I think this is true, that my poems harvest their materials prior to the poem, somewhere off-camera, and in this way they begin in media res, where the occasion for the poem is a kind of field study in which these materials are dispensed, memorialized, toppled over, repurposed, valorized, revisited, demonized, renamed, and dispensed again. There are people who'd call this symbolism, which I don't think is true, because it's more like poetry with a handful of activation sites inside of it. You arrive at this place and you turn the peg in the turnpike, or you arrive at this place and you light a small signal fire. So part of what I'm doing here is showing you the inside of the attic: sisterhood, the repulsiveness of Billy Corgan, a poster on a bedroom wall, this very word silver, this very word fuck, plus infestation, plus blight.

It's hard to think of bestiality scenes in American writing that come close to what happens in Faulkner. You're thinking, "The Sheep Child"? And here's a troubling fact: among the (arguably) most famous bestiality scenes in American fiction—which happen across three Vonnegut novels, one Philip K. Dick novel, and apparently The Cider House Rules—100% of these scenes involve a woman committing sex acts with a pony. What's terrifying about Ike Snopes fucking a cow is you empathize with a human committing bestiality and you empathize with the cow too. The prose veers sharply away from Faulkner's trademark exasperation and nestles into a pastoral nebenwelt where the sentences are Romantic, sure, but they're also foamy and swaddling, like sun on a cheek. They even go on a honeymoon after marrying. It's a courtship satire where each member is present and pleasured equally in the prose, and when it ends you feel this disturbing empathy for a person who's just sodomized a cow.

These were my fault lines: taboo and abstract autobiography. And I'd written down in a notebook that incest is uniquely disruptive to people in this country. "It kicks the pressure points." So I decided to look incestuous desire in the eye, and I wanted to abstract the myth of the self by harvesting real-life facts from the autobiography of the poet writing the poem.

But how can a person tell you everything that's stowed in the attic, even one attic? The loss of his first teeth as a child, the unwealthy village where he grew up, wetting the bed and hiding it, catching crayfish in the Delaware River, the filthy arm-skin of young boys, breaking a tooth on a pit, an overweight tomcat, his sister's eating habits, plaque candy, a Smashing Pumpkins poster, math homework, snare drum rudiments, a David LaChapelle photograph of topless Janet Jackson being cupped from behind by her boyfriend, dry eyes and visine, Billy Corgan's face, an absence of mother, forgetting to knock one night when he walks into the bathroom.

And watching the door swing open and shut in front of you, any given poem is only a glimpse inside the attic.

It was scratching along, three drafts in eight days in late September 2011, but the poem felt too piled upon itself. There was nothing in the architecture of the poem that brought its tensions to the fore of the page, these conflicts between facts and abstractions, self and unself, myth and taboo, and the way they all revolt against one another.

In typography, there's this phenomenon known as "rivers of white," a distribution of words on the page during typesetting that creates a visual effect where we see rivers of negative space trickling through the text. Reading the poem now I think this was the twilight of "Nectarines," a poem that ends with a boy floating down the Delaware River. What I needed was to let more river into my poem, push the banks farther apart, let the revulsions collide in the water that divides the two halves of the poem, barricades them really, but also forces them to cross over to their opposing banks in order to be read. I read this poem for the first time three years ago in a basement on Ludlow Street, and it became one of the backbone pieces in my first book of poems, American Barricade. For me it was an education in learning to revolt what revolts me.