Diana Khoi Nguyen on “I Keep Getting Things Wrong” 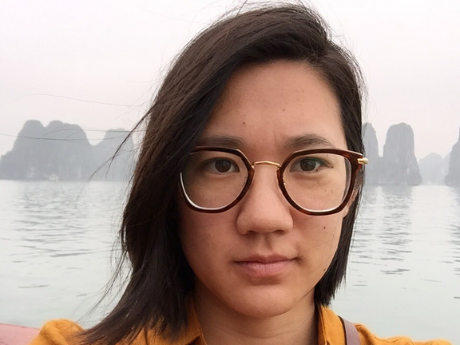 I Keep Getting Things Wrong

My father, just
out of his teens, stands on the rooftop
of the embassy in Saigon, his birthplace.
He gives his hand to his mother,
and all around them, a thousand hands reach up

not to wave. None of his siblings died.
Their bodies like a fine chain balled tight
in a fist. They made it out alive.
Why is he looking at me like this?

This is the idea of a house my father built
in Southern California. These two circle windows
and bamboo on all sides. He brought a jungle here,
complete with French doors.
These are the tiles from his mother's house, cool
against my cheek. I talk to him in one tongue,
he answers from the morgue.

Let's get on with it.
When I return to that house, I eat the food
left out for my dead brother. I don't waste much.
I slide open and close his closet, untangle
the window blinds. The bees are quiet in the
walls, now, their colonies are dying off.
His shoes on my father's feet are the only moving thing
in sight.

On their flight to America,
the choice for lunch was chicken or pasta, but when
the meal cart reached them, there was only pasta.
My father smiled at the flight attendant and asked,
Why didn't you kill more chickens?

The certificates we use to be certain of each other:
ID cards, contracts, permits, deeds,
fishing licenses, driving licenses, car titles, carry permits,
registrations, income statements, IOUs, testimonials,
certificates of birth, custody, and death, letters of consent.
Do I have permission to approach
a drowning man from behind?

I sit at my desk, typing and deleting
words.
Twice I dreamed I fucked my brother.
I keep trying to wake up. I keep getting things wrong.
I'm ready to feel better.

On "I Keep Getting Things Wrong"

In the messy aftermath of a death in the family (all life is an aftermath), it took me two years to access and gain entrance into my grief. What enabled this entry was exploration into my parents' flight from Vietnam after the Fall of Saigon. It was the 40th anniversary of the war's end, and I found myself asynchronous by grief over my brother's suicide—that is, out of sync with loved ones, my environment, my routines. Only in considering a specific time in the past, on the eve of an anniversary, did I fully realize the fluidity of trauma, memory, and history. How it is a river which contains us, the living and the dead, the past and the present—continuously winding toward a future.

The particulars of my grief manifested as uncertainty about the world: its facts, laws, seasons, and kindnesses. I did not trust my faculties because I felt too much and not at all, simultaneously. In poetry, I had been ushered (and now usher others) to "Tell the truth, even if it's a lie." A poem could be fluid like the river which carries all of us, all of everything—my history, your memories, the traumas we share and don't. "I Keep Getting Things Wrong" is a disclaimer which is both certain and uncertain. This is what I know. And yet, how can I really know that which happened before I was born? I was not there. And my father does not talk about what it was like to leave from the US Embassy in Saigon the day the war ended. But I have seen photographs and videos of all the hands clambering to get past the Embassy gates on that day. I know who made it out alive, because I am alive.

In a river, the water will fill you in as you fill it with your own body. The legacy of war is like water. A manmade property of life. The cost of living. It took 27 years for my father to return to Saigon, and in that time, he built a home in California with tiles from his mother's house, with French doors, with bamboo. We cannot escape what we know. What I know: the ritual to feed our dead. What I don't know: why I eat the food left out for my dead brother. I do not know what my father ate on his flight (his first) out of Vietnam, but I do know how my father killed chickens for dinner.

Before my brother died, my mother would have nightmares about the War. After he died, I woke to her nightmares about my brother—from our shared hotel room in Ho Chi Minh City. I saw firsthand how difficult it was for her to be in current day Vietnam. She had to map her wartime memories onto every street, alley, and stall. This used to be called that. This used to be that, she would tell me.

Now she calls me to tell me her dreams about my brother, about me. We are in danger, and she cannot find us. I do not tell her about my own dreams, or how I feel I am my brother, identical to him somehow. That I am dead and here and moving toward death, along with everyone else. I want to shake the legacy of dreams and history off of my life, but it isn't mine, this life. It is ours, this river. So I let it in, and move in it.

I have been raised to wait for permission, and I wonder if this has kept me alive.