Ellen Welcker on “This Day in History” 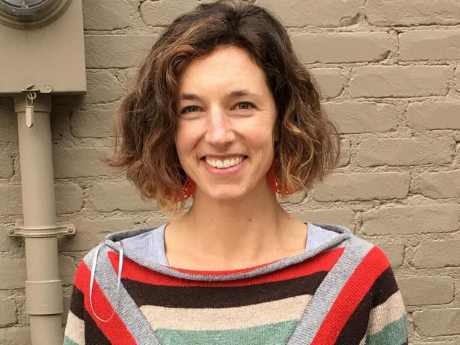 This Day in History

Step one was chop onions.

Step two was make a bed so cauliflower can nap; this was before I knew that one lady was a fraud. My feeling was, then and now, real.

I'd been conducting a seminar on the female experience. We began with a boiled egg—attendance was spotty—followed by a round of self-flagellation with a variety of kelp.

Ground rules included prohibition of circulation because no pain no. This was, after all, a female experience. Very. Gainsayers were everywhere. When numbness set in, the rush of blood like a flood forced new chutes through everyone's topographies.

These channeled scablands were deemed Zoticist channels™, "life-giving," from the medieval Latin zoticus, a root word which, unuttered all this time, had shrunk from its nutrient-seeking finger, leaving, of course, a Hole. The people cooed & cried; though hardly in the past, experientially, it was already lore on their tongues. The Hole was an expert in her field, had been burrowing for centuries, had calcified, bled, leaked, cracked, grown sour, & soft as compost again.

The Hole flicked open a compact, held the mirror to her open mouth, motioned for us to gather round. We peered for hours, alternating between the darkness of her interiority & the relief of the steaming glass. Slowly we saw she was a wormhole, a channel to the future, tunnel that hadn't happened yet, inverse of a black hole. So dense with matter.

I said to it, for "it" was genderless, a-gendered, a genderhole: I'm with you, I'm right here. It said, no. I want you to come in. Inside that vowel, that "I," was a pink tunnel. It had a beginning (false), and an end (made-up). It was narrative.

"Lair," the tunnel preferred to be called, "den." "Hole," people called it anyway, "hole." The tunnel that was a poem, a country, a lie, or rather—a shaft of stolen thoughts. Some of them still glittering, like ore.

Finally, we arrived at a small appendix, flaccid, pure cliché—but once it had been taken at its word. Once, it had held breaths in its belly, kept them, and grew, 'til it was no longer a button but a globe: huge, resplendent with air, deer, splinters, carpets, blooming tick populations, celebrity endorsements, humidity, toxic shock syndrome, unidentified pestilences, clouds of spores.

Things were about to get real, my friends. I blew my nose. My hair product was sheer intensity. The cauliflower was just getting woke.

From Ram Hands (Scabland Books, 2016). All rights reserved. Reprinted with the permission of the author.

On "This Day in History"

When I was putting this book together in spring and summer of 2016, I described this poem as part ars poetica / part plan for the new world order. Maybe I couldn't see very well, maybe I am still waking up. Either way, I have stopped believing in this description. I mean, if this is my ars poetica, ok. But if this is my plan? I'm gonna need a better plan. Let me try again.

I live in a place with a long history of white supremacism. The local NAACP is in the same building as my kids' preschool; I used to see the woman who was president of our chapter frequently. Then she was outed as a white person who "chose" blackness. The president of our NAACP. My feeling was, then and now, real.

I was home sick, but I work from home. I was surrounded by the laundry, the emails, the dishes, the gross crumbs on the couch, the dog, the children—the endless piles of domesticity. I was self-flagellating. I started the poem.

A hole is the subject. It makes you nervous.

I learned the Medieval Latin word for 'life-giving' from journalist Michelle Nijhuis who wrote in a deceptively lighthearted blog post about finding language for the "sense of hopelessness that comes with knowing a bit too much about climate change."

I tried to envision a narrative that isn't received, but imagined, and therefore malleable, mutable, undefinable. To open oneself to it and to a multiplicity of 'its.' To constantly see narrative anew. To allow for the coming together and the drifting apart of experience + narrative. The many angles and relative forces at which they collide, or don't.

The tunnel / the hole: everyone has an opinion on it. Is it soft, or wet. Is it osmotic, is it self-contained. Is it gendered, dangerous, political. Should it be gated. Walled. Given back.

Edward Gorey wanted to be in here. I love his collaboration with Peter Neumeyer: Donald Has a Difficulty, in which a mother removes a splinter from her son's leg and tells him to think of "markets, battles and strings." This is the appendix of imagination. It bloats. It grows sick. I fight for the health of it. It is a female imagination. I fight for all of them.