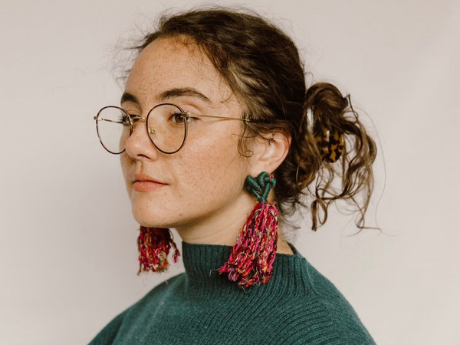 I Remember How Cold I Will Be

Following the snow depressed by some strange foot, following some strange strain against love left, for now, in the yellow house,

I step over the seed released from its spine and the winter’s hardened slipper beside a gravel pit. Lately, a habit

of thirst in the night. I wake with it, and do nothing, my bodyweed a tumble beside another—toward, and away, and toward.

We each accept what little comfort the other can afford. What little I can accept. Yes, sure. I’ve suffered. Is this more?

How basic I become in my brooding, how racked with ho-hum in some noon hours. Meanwhile: the lavender sigh

of riverside flora. The river’s reflection snaps into a rushing sky. How many chances have I missed to force

the thaw that always burns, though for the better, for a time? The poison sumac makes a puff of its one branch. Snow

outlines this moonscape, the moss, the lake, the lichen now a jewel gleaming under powdery teeth. Funny, how elk have feet; funny,

how they are nearby but unseen. What is barren to one is shelter to another. Is this suffering? I am famished. Is that?

Even the goose, pausing at these banks on its way elsewhere, plucks morsels from river muck—its beak glistening, onyx.

Should I, too, leave, in order to return? Yellow light on the yellow house. Who else could be here to notice you, to notice being here?

On “I Remember How Cold I Will Be”

I started this poem years before I finished it. The middle lines, about accepting comfort and brooding and the ho-hum, as well as the near-end lines about geese with onyx beaks and leaving “in order to return,” came first. I heard these lines now and then throughout my daily life. I knew there was truth to them. I knew I was building up to a poem about restlessness within intimate relationships and about the uncertainty that can, like these lines did, come in and out of focus as time barrels on. But the lines traveled from draft to draft and were always, ultimately, nixed. I couldn’t yet build a world to hold them.

It was during a winter squall—The Last Unkillable Thing (University of Iowa Press, 2021), where this poem appears, is inspired by snow and the aftermath of a parental loss (this being the “suffering” our speaker mentions)—that I found the poem’s world. I went on a walk with a narrow sketch book in my pocket and, with my gloved hands, recorded images from the snow-covered trails of Johnson, VT, where I was then a resident at Vermont Studio Center. I saw an iced-over construction site and wrote “gravel pit.” I saw a dormant blackberry bush and wrote “lavender branch.” And so it went.

Back in my studio, I massaged this image bank into music. “Lavender branch” became “the lavender sigh of riverside flora.” I found the rhyme between “gravel pit” and “Lately, a habit….” It was then that I remembered those old, reappearing lines. I realized their speaker could, too, take this walk, leaving her lover behind, if temporarily, to do so. From this discovery, the poem fell rapidly into place.

The previous night, another resident mentioned glimpsing an elk in the snowstorm. This is where the elk lines came from—their feet, their ability to stay invisible, their need to remain so. This led to the bit about a barren landscape becoming shelter, which, in my mind, and when plugged into this poem’s context, is not only speaking about faunal survival but also about how miscommunication can warp relationships, how the quiet brought on by individual brooding can lead to two people living largely out-of-step.

The yellow house mentioned is real, and it sits across the river from what was my studio at VSC. However, at the poem’s threshold, it becomes the place where our speaker walks away, for now, from her lover. And, at the poem’s end, this is where the speaker imagines truly leaving—like the geese do each winter—in order to return. But, return to what, exactly? To life with the beloved? To herself? She seems unsure.

The poem’s final turn, this chiastic question about noticing, is an open ending that could—depending on the reader and their mood at the time—be sweet, an observation that the daily witnessing between two people can be reason enough to stay. Or—depending, again, on what the reader sees in the poem’s mirror—this question could be darker, one that alludes to the debt of attention a person may imagine when a relationship is fueled by worry that, without the lover, we will go unnoticed, and—the question underneath that worry—if unnoticed, do we exist at all?

I do not know what the speaker of the poem decides in the end, whether she stays or goes. I do know that “I Remember How Cold I Will Be”—which gets its title from the last line of Lucie Brock-Broido’s “Carrowmore”—is further complicated within the context of The Last Unkillable Thing, a book that mourns a parent. In those pages, the poem’s questioning is shot through with loss as our speaker wonders more broadly, How can I change amidst a grief that makes change unimaginable? But then, how can I remain unchanged, knowing such grief—knowing death itself—is possible?